An employee working the Christmas shift at Kaiser Permanente San Jose Medical Center has died after falling ill with COVID-19. The worker was one of at least 43 staff members who tested positive for the coronavirus in recent days, an outbreak possibly linked to staff member who wore an inflatable holiday costume to lift spirits.

The staff member who appeared briefly in the emergency department Christmas Day wore an air-powered, holiday-themed costume, according to a hospital executive. KNTV-TV, the San Jose NBC station that first reported the outbreak, reported that the costume was an inflatable Christmas tree.

Inflatable costumes are typically battery-powered and use a fan to keep the costume puffed up. But such a fan can also cause virus particles to travel much farther in a room.

KNTV-TV reported that the person who died was a woman who worked as a registration clerk in the emergency department.

“Our thoughts and prayers are with those affected by this terrible loss. We are providing support to our employees during this difficult time,” said a statement issued by the hospital late Sunday.

In a statement Saturday, Irene Chavez, senior vice president and area manager of Kaiser Permanente San Jose Medical Center, said officials were investigating whether the costume contributed to the outbreak.

“Any exposure, if it occurred, would have been completely innocent, and quite accidental, as the individual [wearing the costume] had no COVID symptoms and only sought to lift the spirits of those around them during what is a very stressful time,” Chavez said.

“If anything, this should serve as a very real reminder that the virus is widespread, and often without symptoms, and we must all be vigilant,” Chavez said. 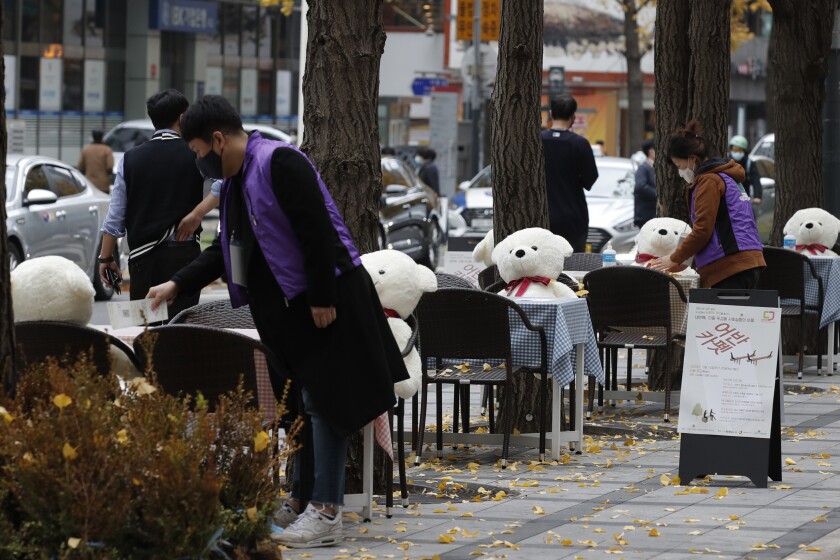 A South Korean study raises concerns that six feet of social distance may not be far enough to keep people safe from the coronavirus.

It was not immediately clear whether the person wearing the costume later tested positive for the coronavirus.

Chavez said the hospital will no longer allow air-powered costumes at its facilities and are taking steps to reinforce safety precautions among staff, including no gatherings in break rooms, no sharing of food and beverages and wearing of masks at all times.

Strong drafts of air can help the coronavirus infect other people. In one such case in the southern Chinese city of Guangzhou, a pre-symptomatic person who had just returned from Wuhan — the first epicenter of the global pandemic — was eating lunch at a restaurant with family. Scientists concluded that that person infected two other families sitting at neighboring tables about three feet away; they suspect that infected droplets from the index patient hitched a ride on air flows powered by an air-conditioning system.

Located in the heart of Silicon Valley, San Jose is the largest city in Santa Clara County, Northern California’s most populous county, whose hospitals are suffering from severe overcrowding in its worst surge of the pandemic. On New Year’s Day, 97% of Santa Clara County’s standard capacity of ICU beds were occupied. 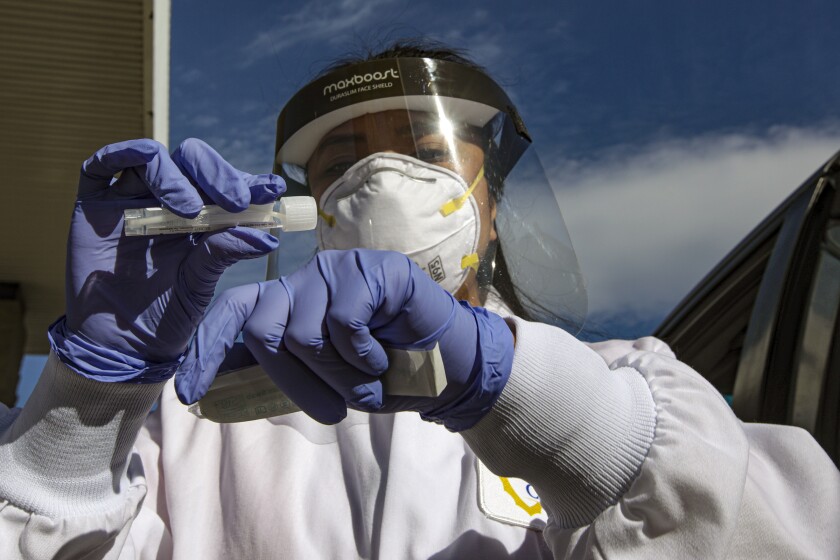 Last week, county officials said hospitals were stretched to the limit, with 50 to 60 patients each day stuck in emergency rooms waiting for a bed.

Often, the only way a patient can be moved into an ICU bed is because a COVID-19 patient has died, said Dr. Marco Randazzo, an emergency room physician at O’Connor Hospital in San Jose and St. Louise Regional Hospital in Gilroy.

Every single one of the ICU beds at St. Louise Regional Hospital is full, and patients are now in surge beds, Gloria de la Merced, the hospital’s chief operating officer, said last week. “This level of hospitalizations has never happened during my career,” she said. “If we go beyond the surge capacity, everyone will be affected — more people in our community will know someone who died.”

“This has been the state of the pandemic for the last several weeks, and it is showing no signs of letting up,” Kamal said.

Kamal pleaded with the public to keep on wearing masks, staying socially distant and canceling gatherings.