December 04, 2022
Home Health News Which Biotech Company Has the Most Promising Coronavirus Vaccine? – The Motley Fool

The U.S. Congressional Budget Office projects that the COVID-19 pandemic will cause more than $16 trillion worth of damage to the U.S. economy over the next decade. More than 140,000 Americans have already died from the coronavirus, meaning that in the span of six and a half months, SARS-CoV-2 has killed more people than the number of Americans who die each year from opioid overdose (46,000), traffic accidents (36,500), and gun violence (40,000) combined.

The COVID-19 pandemic isn’t subsiding in the U.S., with more than 70,000 new cases per day as of July 15. Nearly 25 states have now rolled back their reopening plans as the nation struggles to contain the deadly virus.

Fortunately, there are over 140 coronavirus vaccines in development. Out of this group, four vaccines are currently frontrunners. Let’s look at which vaccine company is the best buy for investors. 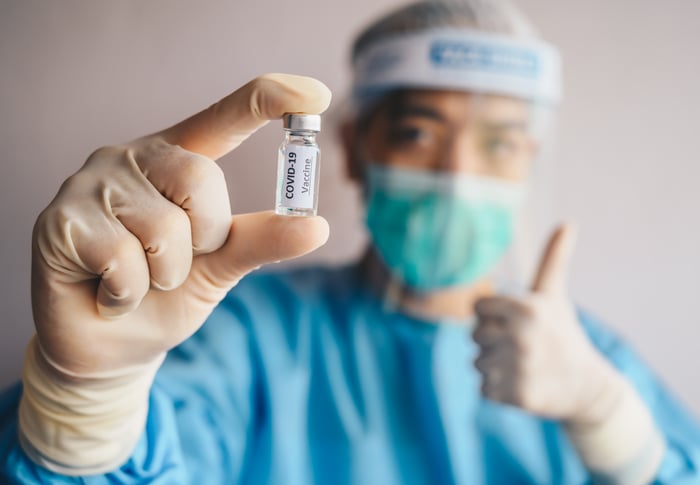 Four rising stars in the search for a cure

First up is Moderna‘s (NASDAQ:MRNA) mRNA-1273, a vaccine containing messenger ribonucleic acid strands that code for the SARS-CoV-2’s spike (S) protein, which is responsible for facilitating the virus’s entry into host cells. It’s theorized that the vaccine functions by prompting the body’s immune system to recognize S-proteins from its vaccine to defend itself, so it’s ready in the event the actual SARS-CoV-2 enters the body. In phase 1 clinical trials, all 45 healthy volunteers who received mRNA-1273 developed neutralizing antibodies (antibodies that can combat SARS-CoV-2). The vaccine will enter phase 3 on July 27.

Second up is Pfizer (NYSE:PFE) and BioNTech‘s (NASDAQ:BNTX) BNT162b1. Like mRNA-1273, BNT162b1 is also a messenger RNA vaccine, except it encodes a specific receptor-binding domain of SARS-CoV-2. The vaccine also has a similar mechanism of action as mRNA-1273. Additionally, all 45 healthy subjects who received Pfizer and BioNtech’s vaccine in phase 1/2 trials developed neutralizing antibodies. BNT162b1’s phase 3 clinical trial is scheduled to commence shortly.

The third candidate at play is Inovio Pharmaceuticals‘ (NASDAQ:INO) INO-4800. INO-4800 is one stem upstream from the two mRNA vaccines discussed previously, as it features DNA that encodes for messenger RNA that encodes the SARS-CoV-2’s S-protein.

In phase 1 trials, 34 out of 36 participants who received INO-4800 developed an immune response. However, it is not known what percentage of patients developed neutralizing antibodies. Without this metric, no definitive efficacy claims can be drawn.

Lastly, AstraZeneca (NYSE:AZN) and Oxford University are developing their own version of a vaccine that encodes SARS-CoV-2’s S-protein. The vaccine is labeled AZD1222 and is made from a weakened version of the common cold virus. Phase 1 results are set to be released July 20. The company has already announced that not only did AZD1222 produce antibodies when given to trial participants, but it also led to the development of killer T-cells against SARS-CoV-2. The vaccine is currently in phase 3.

So which company is the best buy?

While all of the companies above are making significant progress in the race to develop a coronavirus vaccine, AstraZeneca’s AD1222 is currently the most promising candidate due to its ability to produce both antibodies and killer T-cell response. There is growing evidence that a T-cell response is as important as neutralizing antibodies in fighting SARS-CoV-2.

A recent study showed that coronavirus antibodies start to fade within three weeks and disappear entirely by three months. Killer T-cells, however, can circulate within the body for years after injection. Hence, AstraZeneca’s vaccine has the potential to become a double defense against the SARS-CoV-2.

The company launched a phase 3 clinical trial evaluating AZD1222 on July 4, and has the manufacturing capacity to produce 2 billion doses if approved. Since the vaccine offers the potential to save countless lives and alleviate economic impact, I recommend investors add AstraZeneca to their portfolios.

[ad_1] For many people weight loss is but a dream, but that doesn’t have …