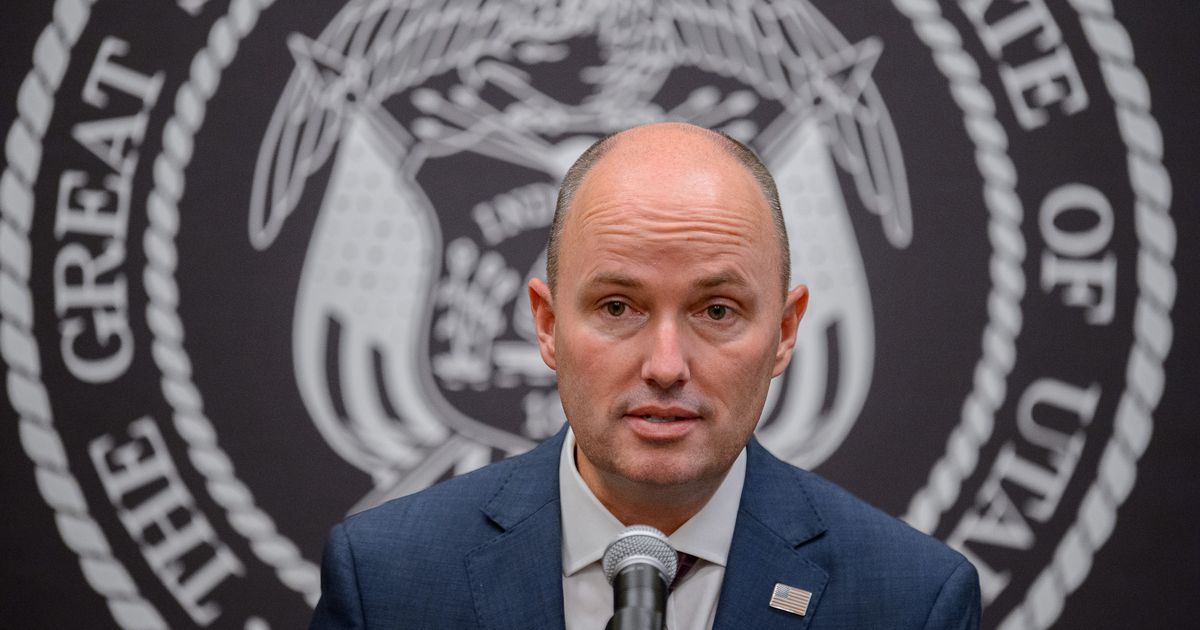 [embedded content]
Utah Gov. Spencer Cox addressed the state’s coronavirus response, including progress on vaccine distribution, during a weekly news briefing on Thursday.
The state is opening vaccinations to people 65 and older, and those with certain chronic health conditions, starting March 1, Cox announced.
As of Thursday morning, he added, “approximately 35% of all of our seniors 70 years of age and over have been vaccinated. That’s about 84,000 of you, and that’s just in a couple weeks, so we are well on our way, again, to getting those that are most at risk vaccinated and saving lives.”
Cox said the state has reached an “important milestone”: more COVID-19 vaccine doses — when first and second doses are combined — have been administered than the number of positive tests reported in the state.
As of Thursday, 362,701 positive coronavirus cases have been reported.
And 84,154 Utahns are fully vaccinated, having received both doses of the vaccine.
“We are trying to be more viral than the virus and it’s happening,” he said.
Health officials have administered upwards of 345,000 total vaccine doses. The rate of positive COVID-19 tests in Utah has been holding steadily around 16%, or more than three times the rate state health officials have said indicates the virus is under control.
The state is planning on receiving another 33,000 doses of the new Johnson & Johnson vaccine per week by late March, Cox said. Another 84,000 per week of the AstraZeneca version of the vaccine could be arriving by April, Cox said.
That volume “just changes the ballgame for all of us and that’s what we are planning for,” he said. “That’s what we are preparing for.”
As the state ramps up its vaccination distribution, Cox said “there will be scheduling issues.”
”There’s going to be in every state, in every country in the world, there’s going to be a little chaos in making this happen and we are going to embrace that chaos, we’re going to solve that chaos,” he said, “and we’re going to get shots in arms within seven days of getting that vaccine and we are going to save lives.”
Over the next three weeks, Cox anticipates that all seniors 70 and older who want to be will be vaccinated. “We’re going to be finishing up that group of people and moving on to that next phase,” he said.
Cox assured Utahns that people over the age of 70 who are struggling to get a vaccination appointment “will be able to get theirs” in the coming weeks.
In the next phase of eligibility, which starts March 1, people 65 and older will be eligible to receive the vaccine.
So will people with certain chronic health conditions, representing about 400,000 people in the state age 18 and older.
That list includes solid organ transplant recipients; certain cancers; people who are immunocompromised from blood, marrow or bone transplant, HIV or use of other immune weakening medicines; severe kidney disease, on dialysis; people with uncontrolled diabetes; chronic liver disease; chronic heart disease; severe chronic respiratory disease, other than asthma; stroke and dementia.
Cox urged people not to call their health departments to schedule vaccinations now if they’re in one of those categories, and said additional information will be coming in the next few weeks.
“This will allow us to get to normal more quickly as we save the lives of those who are most vulnerable,” he said.
State epidemiologist Dr. Angela Dunn said local and state health departments will focus the rest of February on finishing getting vaccines into the arms of people 70 and older.
Once that broader eligibility opens up March 1, Dunn said, the state will be relying on the honor system. ”If you don’t fall in those categories … don’t seek a vaccine,” she said.
The quicker the state can get through high-risk populations, the quicker people who are lower risk can get a vaccination, she added.
Lt. Gov. Deidre Henderson said 29 Smith’s pharmacies and 18 Walmart locations will be receiving vaccine doses in Utah starting Feb. 11 — initially, only for Utahns who are over 70.
“The state actually has control over who is eligible” to get the vaccines through Walmart and Smith’s, Henderson said.
People who have appointments through their health department should keep those appointments, she said, rather than trying to get one through Smith’s or Walmart.
There will be more information on how Utahns can volunteer to help with the vaccine distribution in the coming days, Henderson added.
Dunn also said national media comparisons on the effectiveness of the Johnson & Johnson vaccine compared to Moderna and Pfizer have been “misinformed.”
Johnson & Johnson trials have proven the vaccine to be effective at protecting 72% of U.S. individuals against COVID-19 infection and is 85% effective against severe disease, she said.
”It’s very important that once the vaccine becomes available, when it becomes our turn to take the vaccine, we all get the vaccine,” regardless of the company that produced it, she said.
Dunn said plans are being put in place to help inoculate people experiencing homelessness and that the Johnson & Johnson single-dose vaccination may be particularly suited for that population, once it comes available.

[ad_1] A new analysis from the World Health Organization (WHO) finds that cheap, widely …