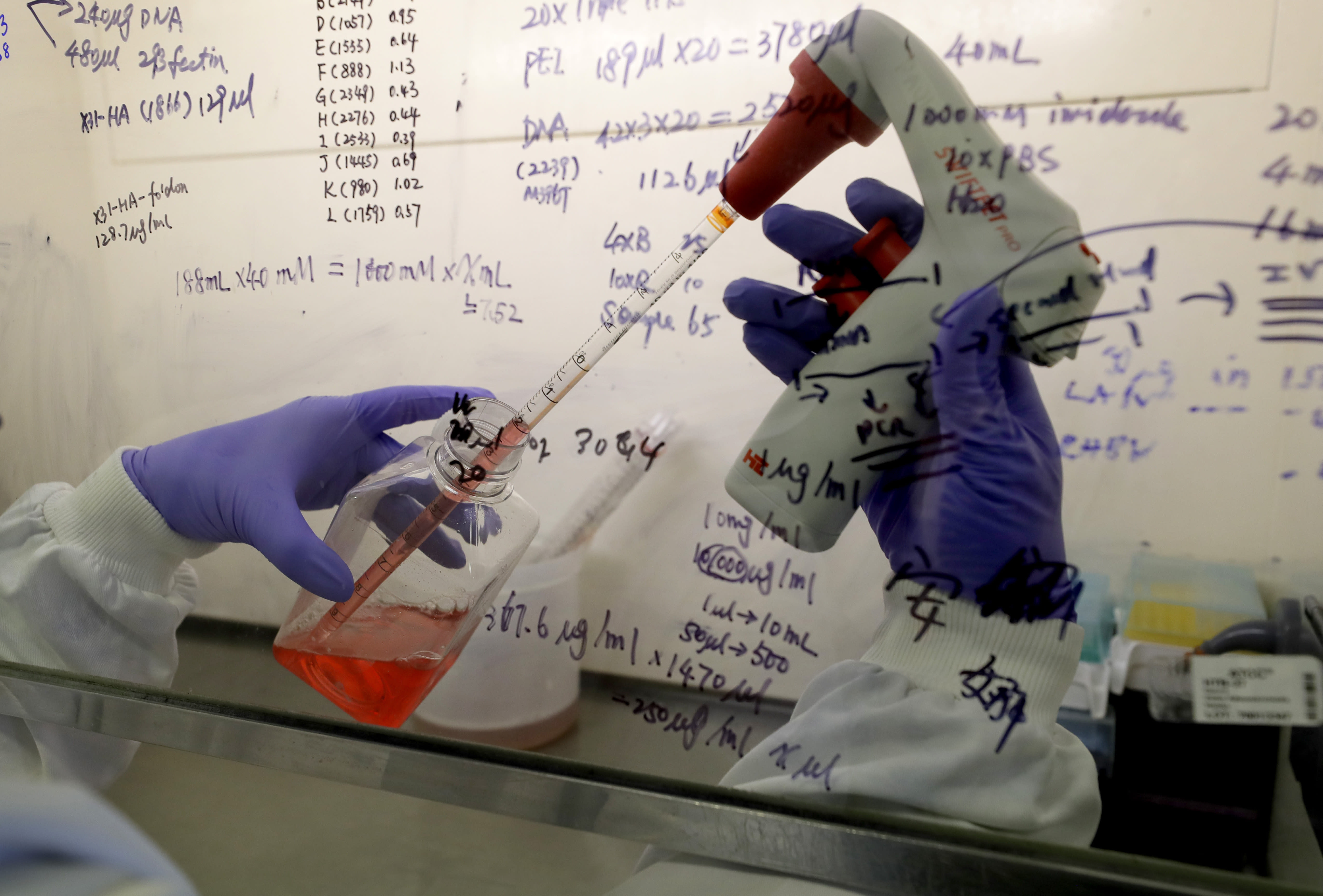 WASHINGTON (AP) — Openly contradicting the government’s top health experts, President Donald Trump predicted Wednesday that a safe and effective vaccine against the coronavirus could be ready as early as next month and in mass distribution soon after, undermining the director of the Centers for Disease Control and Prevention and calling him “confused” in projecting a longer time frame.

Trump also disagreed with Dr. Robert Redfield about the effectiveness of protective masks — which the president recommends but almost never wears — and said he’d telephoned Redfield to tell him so.

Earlier in the day, the CDC sent all 50 states a “playbook” for distribution of a vaccine to all Americans free of cost when one is proven safe and effective — which is not yet the case. Redfield told a congressional hearing that health care workers, first responders and others at high risk would get the vaccine first, perhaps in January or even late this year, but it was unlikely to be available more broadly, again assuming approval, before late spring or summer.

Redfield, masked at times in a Senate hearing room, also spoke emphatically of the importance of everyone wearing protective masks to stop the pandemic, which has killed nearly 200,000 Americans. He floated the possibility that a vaccine might be 70% effective in inducing immunity, and said, “I might even go so far as to say that this face mask is more guaranteed to protect me against COVID than when I take a COVID vaccine.”

Trump would have none of that from the CDC director.

“Vaccine is much more effective than the mask,” he declared.

As for vaccinating Americans, Trump said Wednesday, “We think we can start sometime in October.” One of his recently added advisers, Dr. Scott Atlas, said as many as 700 million doses could be available by the end of March.

Trump made the prediction even though the vaccine is still being tested in human subjects, and some health experts have said they believe a safe and highly effective vaccine is several months way, if not much longer.

CDC sent a planning document on Wednesday to U.S. states, territories and some big cities. Adding to logistical complications, vaccines likely will have to be given in two doses spaced weeks apart and will have to be refrigerated.

Redfield said states are not ready to deal with the demand for such a distribution and some $6 billion in new funding would be needed to get the nation prepared.

Unswayed, Trump said, “We’re ready to move, and I think it will be full distribution.”

Redfield said any vaccine available in November or December would be in “very limited supply,” and reserved for first responders and people most vulnerable to COVID-19. The shot wouldn’t be broadly available until the spring or summer 2021, he estimated.

On Wednesday night, after Trump’s comments, CDC officials initially sent an email claiming Redfield thought he was answering a question about when vaccination of all Americans would be completed. But then they called back that statement, and did not immediately provide additional comment.

Redfield said the “scientific integrity” of his agency’s reports “has not been compromised and it will not be compromised under my watch.” He also rejected questions about whether the CDC’s timeline for states to be ready for a vaccine by Nov. 1 was politically motivated.

“The worst thing that could happen is if we have a vaccine delivered and we’re still not ready to distribute,” Redfield told Senate lawmakers. “There was absolutely no political thinking about it.”

“The Trump administration needs to leave the science to the scientists immediately,” Murray said.

Democratic presidential nominee Joe Biden said while campaigning that he trusts what scientists say about a potential vaccine — but not Trump.

Biden has said he would take a vaccine “tomorrow” if it were available but he would want to “see what the scientists said” first.

As for the planned vaccine campaign, Redfield said his agency will be working with state health officials to implement the preparations in coming days.

Among the highlights of the plan:

— For most vaccines, people will need two doses, 21 to 28 days apart. Double-dose vaccines will have to come from the same drugmaker. There could be several vaccines from different manufacturers approved and available.

— Vaccination of the U.S. population won’t be a sprint but a marathon. Initially there may be a limited supply of vaccines, and the focus will be on protecting health workers, other essential employees and people in vulnerable groups. A second and third phase would expand vaccination to the entire population.

— The vaccine itself will be free of charge, thanks to billions of dollars in taxpayer funding approved by Congress and allocated by the Trump administration. The goal is that patients won’t be separately charged for administration of their shots, and officials say they are working to ensure that’s the case for all Medicare recipients and uninsured people as well those covered by insurance at their jobs.

— States and local communities will need to devise precise plans for receiving and locally distributing vaccines, some of which will require special handling such as refrigeration or freezing. States and cities have a month to submit plans.

— A massive information technology effort will be needed to track who is getting which vaccines and when, and the key challenge involves getting multiple public and private databases to link with each other.

Some of the broad components of the federal plan have already been discussed, but Wednesday’s reports attempt to put the key details into a comprehensive framework. Distribution is under the umbrella of Operation Warp Speed, a White House-backed initiative to have vaccines ready to ship in 24 hours from when a version is given emergency use approval by the Food and Drug Administration.