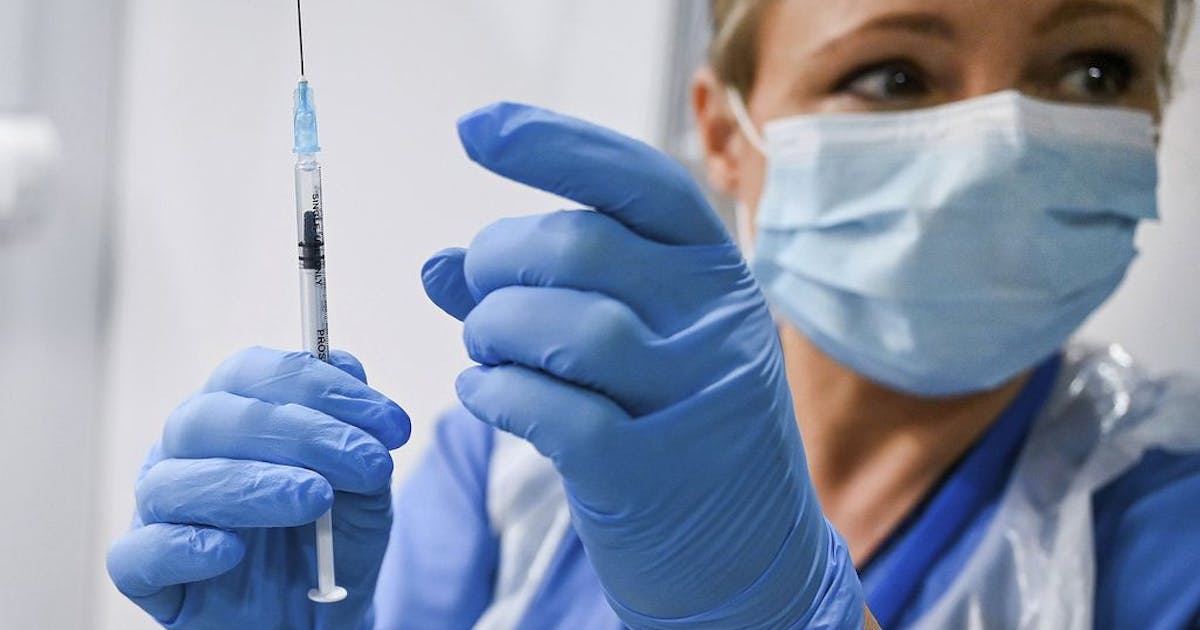 LONDON — Britain’s medical regulator warned Wednesday that people with a history of serious allergic reactions shouldn’t receive the COVID-19 vaccine from Pfizer and BioNTech as investigators look into whether two reactions on the first day of the country’s vaccination program were linked to the shot.

Professor Stephen Powis, medical director for National Health Service in England, said the advice was issued on a “precautionary basis” and that the people who had reactions had recovered.

Pfizer and BioNTech said they were working with investigators “to better understand each case and its causes.″

In the meantime, the Medical and Healthcare Products Regulatory Agency has said people should not received the vaccine if they have had a significant allergic reaction to a vaccine, medicine or food, such as those who have been told to carry an adrenaline shot — such as an EpiPen — or others who have had potentially fatal allergic reactions. The medical regulator also said vaccinations should be carried out only in facilities that have resuscitation equipment.

Such advice isn’t uncommon; several vaccines already on the market carry warnings about allergic reactions, and doctors know to watch for them when people who’ve had reactions to drugs or vaccines in the past are given new products.

The two people who reported reactions were NHS staff members who had a history of significant allergies and carried adrenaline shots. Both had serious reactions, but recovered after treatment, the NHS said.

Stephen Evans, a professor of pharmacoepidemiology at the London School of Hygiene & Tropical Medicine, said the regulator had done the right thing, but the general public shouldn’t be worried about getting the vaccine.

“For the general population, this does not mean that they would need to be anxious about receiving the vaccination,” he said. “One has to remember that even things like marmite can cause unexpected severe allergic reactions.”

The warning comes just a day after Britain rolled out its mass vaccination program amid efforts to control a pandemic that has killed more than 62,000 people across the country. The MHRA gave an emergency authorization to the Pfizer-BioNtech vaccine last week, making Britain the first country to approve its widespread use. Canada’s regulator authorized the vaccine Wednesday.

Even in non-emergency situations, health authorities must closely monitor new vaccines and medications because studies in tens of thousands of people can’t detect a rare risk that would affect 1 in 1 million. Authorities have not said how many people have received the shot in Britain so far, but they plan to give 800,000 doses in the first phase, which will target people over 80, nursing home staff and some NHS workers.

Late-stage trials of the vaccine found “no serious safety concerns,” Pfizer and BioNTech said. More than 42,000 people have received two doses of the shot during those trials.

Documents published by the two companies showed that people with a history of severe allergic reactions were excluded from the trials, and doctors were advised to look out for such reactions in trial participants who weren’t previously known to have severe allergies.

As part of its emergency authorization for the vaccine, the MHRA required healthcare workers to report any adverse reactions to help regulators gather more information about safety and effectiveness.

The agency is monitoring the vaccine rollout closely and “will now investigate these cases in more detail to understand if the allergic reactions were linked to the vaccine or were incidental,” Powis said. “The fact that we know so soon about these two allergic reactions and that the regulator has acted on this to issue precautionary advice shows that this monitoring system is working well.”

Dr. June Raine, head of the medical regulatory agency, informed a Parliamentary committee about the reactions during previously scheduled testimony on the pandemic.

“We know from the very extensive clinical trials that this wasn’t a feature” of the vaccine, she said. “But if we need to strengthen our advice, now that we have had this experience in the vulnerable populations, the groups who have been selected as a priority, we get that advice to the field immediately.”

[ad_1] Campers engaged in a variety of activities including “daily vigorous singing and cheering,” …