Alistair Overeem will headline UFC Fight Night 184 in the main event this weekend. The Former K1 champion will look to make one final run at the UFC heavyweight championship at 40 years of age. Making his MMA debut in 1999, ‘The Reem’ has over 20 years of experience in MMA, not including his early kickboxing days.

Over these many years, Overeem has undergone immense change, not only in his fighting style, but in his physique as well. In the early stages of his career, Alistair Overeem was an intimidating heavyweight knockout specialist with his massive frame and muscular physique.

‘The Reem’ recently gave fans an insight into his diet. The heavyweight contender consumes a massive eight meals a day. His day mostly revolves around training, eating, sleeping in a cycle. Overeem’s diet is mainly protein-based and avoids fat to accomplish his muscular build despite the amount of food consumed. Yogurt, orange juice, and milk is also part of his day.

Overeem is known to eat all kinds of meat, including beef and even horse meat. ‘The Demolition Man’ also enjoys fish, but beef is his favorite protein.

2012 was a blight in the career of Overeem. Having won his UFC debut against Brock Lesnar by first-round TKO, Overeem would get a title shot at then-champion Junior Dos Santos. However, the former Strikeforce heavyweight champion failed a drug test in the buildup to the event where he tested positive for elevated levels of testosterone. 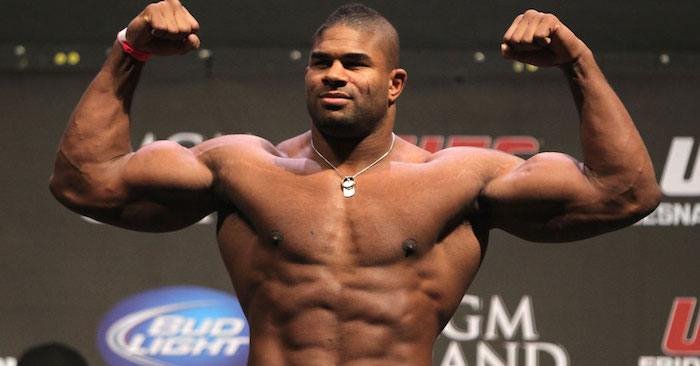 The athletic commission would hand Overeem less than a year suspension, seeing him return to the octagon in 2013. His return from suspension did not go well as ‘The Reem’ would lose three out of his next four fights leading to speculation of the drug test. Overeem would rediscover his form as he acclimatized to his new physique to go on a four-fight win streak till he was defeated by reigning UFC Heavyweight Champ, Stipe Miocic.

‘The Reem’ in the USADA era

Overeem’s failed drug test from 2012 will always haunt his career, with many allegations having followed the fighter since then. ‘The Demolition Man’ has since had no issues with drug testing, even during the USADA era, which saw many fighters issued suspensions during the early days.

Now, with stringent drug testing implemented by USADA, the Dutch fighter has proven to be a clean fighter while still sporting an impressive physique. While Overeem may not have the massive frame he once had, he still towers over most in his weight class.

‘The Demolition Man’ now gets ready to step into the octagon for his 65 fight as a professional. Opposite him in the cage will be Russian star Alexander Volkov, who is 2-2 in his last four fights. A win over ‘Drago’ would have Overeem extend his winning streak to 3 and could put him in a shot for the Heavyweight title.

The UFC recently confirmed a heavyweight rematch between Champion Stipe Miocic and #1 contender Francis Ngannou set for UFC 260. With former light heavyweight champion Jon Jones waiting to debut in the division, Overeem will look to put on an impressive performance to put himself in the best position to get the next title shot.

Read : ‘He Had Small Children Live in His Biceps’- Joe Rogan Looks Back on Alistair Overeem vs Brock Lesnar Physique

[ad_1] Tell me about Mindset Meals. When did you first start the business and …