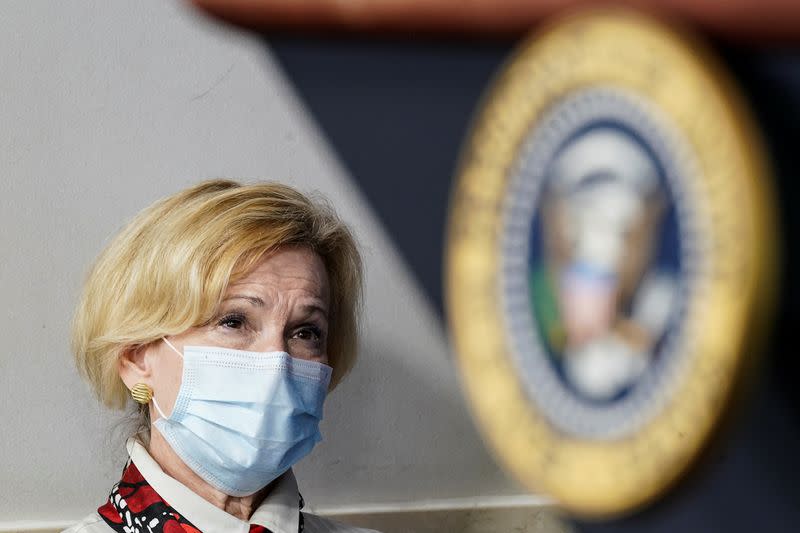 By Lisa Lambert and Maria Caspani

WASHINGTON/NEW YORK (Reuters) – Coronavirus infections appear to be picking up in the U.S. Midwest, the coordinator of the White House Coronavirus Task Force said on Thursday, as Ohio reported a record day of cases and Wisconsin’s governor mandated the use of masks.

The coronavirus outbreak is “moving up” into Ohio, Kentucky, Tennessee, Missouri, Kansas and Nebraska from the south “because of vacations and other reasons of travel,” Deborah Birx told Fox News.

Ohio’s health department said the state had its highest single-day increase in cases since the pandemic started in January, which Governor Mike DeWine told a news conference was “certainly not good news.”

A few states away in Wisconsin, Tony Evers joined dozens of other governors who have ordered residents to wear face coverings in public. Masks are recommended by health experts, but some conservatives say such orders violate the U.S. Constitution.

“While I know emotions are high when it comes to wearing face coverings in public, my job as governor is to put people first and to do what’s best for the people of our state, so that’s what I am going to do,” Evers, a Democrat, said in a statement.

The United States remains the country most affected by the COVID-19 outbreak, surpassing a death toll of 150,000 on Wednesday.

The two states had been hotspots with major outbreaks, but new cases have recently slowed in both, according to a Reuters tally.

According to the temporary healthcare staffing platform NurseFly, demand for nurses in Arizona increased 75% in July over June.

“I’m trying to just maintain a healthy level of anxiety,” said Rachel Norton, a traveling intensive care unit nurse who was leaving Denver on Thursday for a one-month contract in Mesa, Arizona.

Graphic: Tracking the novel coronavirus in the U.S. https://graphics.reuters.com/HEALTH-CORONAVIRUS-USA/0100B5K8423/index.html

The surge and spread in novel coronavirus cases has hampered efforts to recover from an economic crisis brought on by stay-at-home orders and business closures that have thrown millions of Americans out of work, closed schools, and put entertainment and professional sports events on pause.

Smoking a cigarette outside a food bank in Chicago, William Hannah said the pandemic “has ruined me. I’m now jobless, homeless and waiting for my job to come back.”

The 63-year-old worked as a cook at the United Center, home of the Chicago Bulls and Blackhawks, before the NBA and NHL canceled games and entertainers halted events.

On Thursday, Commerce Department data for the second quarter showed the deepest contraction in the U.S. economy since the Great Depression.

The bulk of the plunge in gross domestic product occurred in April after businesses, including restaurants, bars, theaters and factories, were shuttered to slow the spread of the virus.

The latest high-profile victim of COVID-19 was Herman Cain, a former Republican presidential candidate and supporter of President Donald Trump, who pointedly refused to wear a mask.

Cain was diagnosed with the disease in late June after attending a Tulsa, Oklahoma, rally for Trump, an event where many attendees crowded close together without wearing face masks. Cain tweeted a photo of himself at the event without a mask, surrounded by fellow Trump supporters.

“We’re heartbroken, and the world is poorer: Herman Cain has gone to be with the Lord,” a statement on his website said.

The U.S. outbreak initially centered on the northeastern region around New York, which still has by far the highest total of fatalities of any state at more than 32,000.

On Thursday, Mark Levine, chair of the New York City Council health committee, expressed alarm that cases are rising again in the area, pointing to New Jersey, Connecticut and Massachusetts.

“Now, for the first time since spring, cases are rising again in all three,” Levine wrote in a series of tweets. “NY is now an island within an island, with warning signs looming on all sides.”

Graphic: Where coronavirus cases are rising in the United States https://graphics.reuters.com/HEALTH-CORONAVIRUS/USA-TRENDS/dgkvlgkrkpb/index.html

[ad_1] CLEVELAND, Ohio — Researchers in the United States have confirmed a case of …