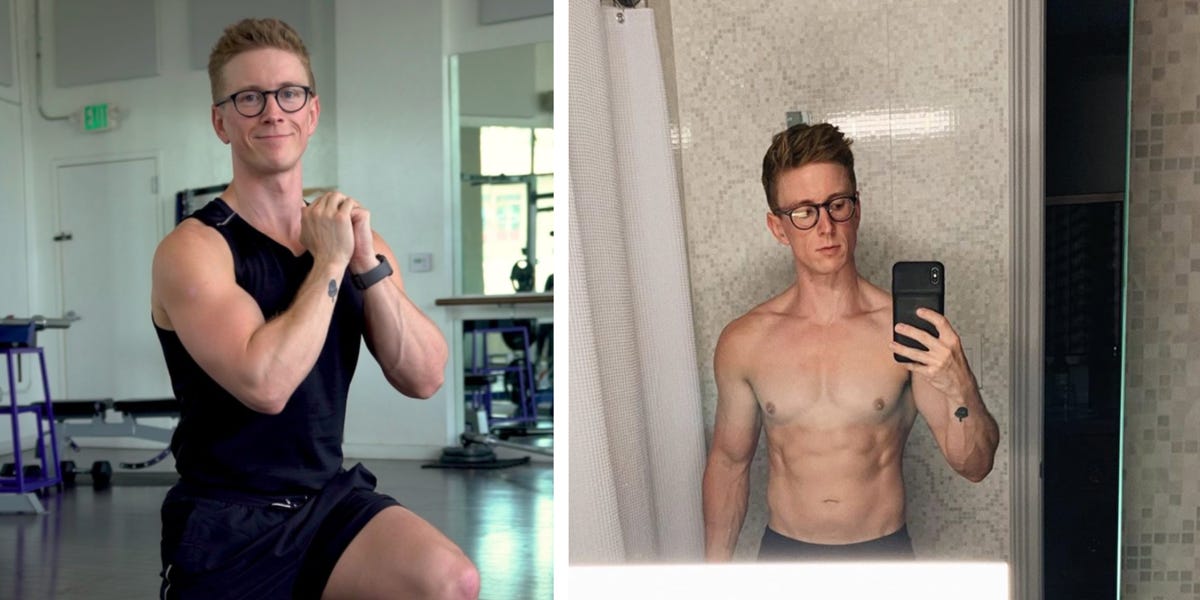 If you still associate Tyler Oakley with his Troye Sivan collaborations or the 2010s era of YouTube challenges, the Oakley of today may surprise you. For one, he looks a lot different, and his audience definitely noticed the changes.

“As time went on, more and more people were commenting asking for workout routines or what I do at the gym,” Oakley told Insider over the phone. “I grew up with body image issues and not feeling good about myself and not necessarily liking who I was and feeling societal pressure. I can definitely see that if I were to go back in my earlier videos, it’s like a different person.”

In between making weekly YouTube videos for 13 years, starting as an 18-year-old college student up to today’s uploads as a 31-year-old with an impressive list of accomplishments – he’s a New York Times bestseller, he hosted a show on EllenTube, he interviewed First Lady Michelle Obama – Oakley has experienced a full evolution as a creator and person.

One career highlight sent him spinning in an entirely new direction.

Oakley says that part of his transformation is due to the experience he had preparing for and competing on “The Amazing Race” in 2016 with his best friend Korey Kuhl. The duo placed third in a special season of social media stars, and they returned for Season 31 in 2019 to place second.

“It was a lot more athletic than anything I ever thought I would ever do would be. I’d never been an athlete, I was never a jock in high school, none of that,” Oakley said. “It was something that pushed me physically and mentally and I got home and it was like ‘Wow, I don’t really want to stop.'”

Starting his day by getting up earlier to work out became routine for Oakley, and when fans started commenting about his body transformation, he realized he could make fitness a part of his content.

“I think content resonates most when you can tell the creator genuinely loves what they’re making,” he said. “The things that I save most in my own [Instagram] account are people’s workouts, and I always go back to them when I’m at the gym wandering around like ‘Oh, what am I supposed to do now.'”

“The ones that I follow are a lot of professional, full-time athletes. It’s a really intense workout. If somebody were to find that and they’ve never gone to the gym, they’d be like ‘I don’t even know, that’s so intimidating.’ So I wanted to make something that doesn’t necessarily exist on the platform that I’ve found, which is an approachable format.”

Oakley launched an IGTV workout tutorial series, and luckily most of the exercises can be done at home during quarantine

At the beginning of April, once stay-at-home orders were already in place for many of his followers, Oakley launched an IGTV series called “Get Fit with Tyler Oakley.” Each episode is under five minutes and focuses on a different type of training. His co-host is Oakley’s own friend and personal trainer, Jared Gonzales.

“I’m ready to turn these shoulders into boulders,” Oakley says in the introduction of his fourth episode. He then uses dumbbells, weight plates, and a cable to demonstrate an overhead press, a front raise, a side raise, and a shrug, as he and Gonzales explain the correct posture for each exercise and offer tips and advice.

“By the time we had our shoot, the coronavirus stuff was bubbling up and it was like ‘Oh, I wonder what this is going to turn into.’ In my head it wasn’t even a thought that it was going to get to the point where it is today,” Oakley said. “It was totally coincidental that a lot of those workouts that we created were approachable for anyone, depending on whether or not they have a gym membership or have equipment or have ever worked out.”

It’s his first venture into IGTV content, the long-form video accompaniment to Instagram that launched in 2018. Aside from YouTube, Oakley has diversified his content, and he co-hosts his popular “Psychobabble” gossip podcast with his “Amazing Race” partner Kuhl. The same year he started training for the reality competition series, he also published his New York Times bestselling autobiography “Binge.”

“It challenged me to create in a much more vulnerable and permanent way, where every word was so deliberate,” Oakley said. “When you make a YouTube video you just chirp, chirp, chat, chat. It was a challenge and it was a really fun one. It was something I was so proud of, and hopefully every time I make something I want to look back at it and think ‘Holy s—,’ I put it all on the line and I’m so proud of what it turned out to be.”

His YouTube content has always been engaging, which is what made him an A-lister on the platform in the first place, with over 7 million subscribers. But what used to veer more toward family-friendly antics (he was invited to President Barack Obama’s White House) has also taken a bit of a turn in recent years.

Oakley has done several videos in the past year where he’s gotten high and done activities like trying on wigs from his ever-growing collection and following along with a Bob Ross painting tutorial.

“Yes, I want to be an idiot on the internet and make dumb, stupid videos where I try on wigs and whatever, but I also want to use my platform for good,” he told Insider. “When I see creators nowadays really push the envelope or challenge what it means to be a creator, that challenges me to push myself out of the box and makes me re-evaluate what I’m doing with my platform and whether it’s worthwhile and still good.”

[ad_1] Months into the coronavirus pandemic, researchers are still investigating the actual event where …