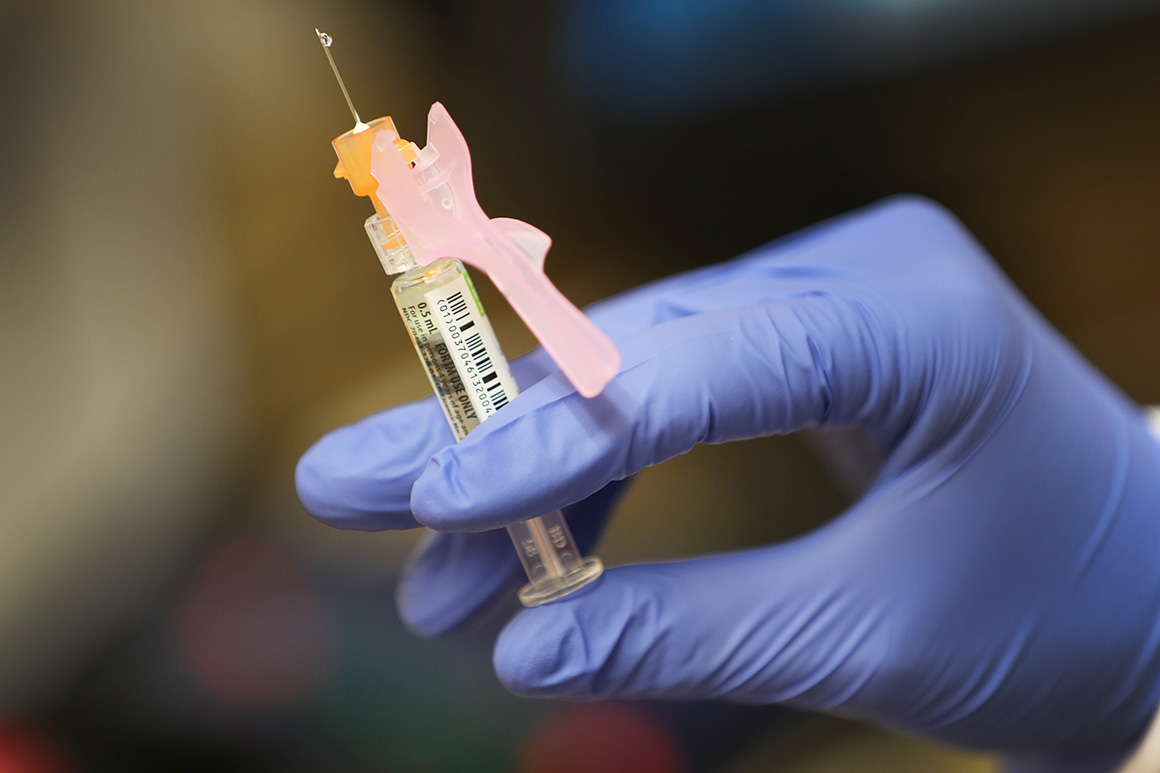 A nurse practitioner prepares a flu vaccination for a patient at a CVS Pharmacy and MinuteClinic. | Joe Raedle/Getty Images

More than a million Massachusetts students need a flu shot by New Year’s Eve if they hope to attend classes come January — making the state a national proving ground for battling a feared winter “twindemic” of flu and coronavirus.

Protesters have swarmed downtown Boston and the state Capitol in the seven weeks since Republican Gov. Charlie Baker issued the first-of-its-kind requirement for students from preschool through college. As the Massachusetts mandate plays out, other states have weighed similar requirements while colleges throughout the country pile on their own orders to prevent flu patients from clogging doctors offices and emergency rooms alongside people infected with coronavirus this winter.

State laws across the country already require various vaccines for students and health care workers, while allowing a host of exemptions. Governments still have broad authority to implement new flu shot orders, potentially paving the way for mandatory inoculation against the coronavirus in a country where vaccine skepticism is spreading and President Donald Trump has resisted many public health protocols during the pandemic.

“This is a brave new experiment by the state of Massachusetts,” said Lawrence Gostin, who heads a university-based center on health law that serves as an official collaborating institute with the World Health Organization. “If it turns out to be a wholesale success, that should influence other states to go a similar route, not just with flu but with other vaccines. But if it causes a backlash and only marginal benefit, states might be hesitant to adopt that model in the future.”

In New Jersey, Democratic lawmakers introduced a bill in the state Legislature late last month that would mandate flu shots for kids in preschool through college. Vermont public health officials also have been considering a vaccine order of their own.

Early evidence suggests the pandemic is widening a nationwide vaccination gap. Preliminary data from the Centers for Medicare and Medicaid Services show vaccination rates for typically given shots dropped by 22 percent this spring compared to last year, among young children enrolled in Medicaid and the federal Children’s Health Insurance Program.

Fewer than 50 percent of adults opt to get vaccinated against the flu in a typical season, a rate CDC Director Robert Redfield hopes to elevate to 65 percent this season.

While states have “the absolute right” under the Constitution to require vaccinations, Gostin said, the stakes are still high for officials who want to expand flu immunity without aggravating anti-vaccine tensions.

“There are a lot of my colleagues, and me included, that worry there’s such large numbers of people in the United States that are vaccine-hesitant or even outright anti-vaxxers, that a mandate might create a vicious backlash not only against influenza vaccines but all vaccines. So, you have to tread very carefully,” said Gostin, director of the O’Neill Institute for National and Global Health Law at Georgetown University.

Before Massachusetts’ move, Gostin found that no state required influenza vaccinations for adults or K-12 students. Only a handful of states require flu shots for kids enrolled in childcare or preschool, according to the Immunization Action Coalition, even though the American Academy of Pediatrics and CDC recommend the vaccine for children older than 6 months.

Supply isn’t the issue. Flu vaccines are inexpensive, easy to find and often effective. But experts say time is running short before the annual flu season accelerates in the Northern Hemisphere.

“Many places have already gotten their supply of vaccines. They just need people to take it,” said Tina Tan, a Chicago pediatrician and infectious disease specialist at Northwestern Medicine. “This month is going to be the critical month to try and implement these types of mandates and get people vaccinated.”

Tan said flu shot requirements for school kids did not catch on before now for two main reasons: Doses are often unavailable when students start classes each school year, plus there are misconceptions that the flu shot is unsafe.

In Massachusetts, the governor has defended the flu shot mandate but acknowledged “some people are troubled” by a sweeping requirement that follows a flu season that sparked more than 40,000 infections and 6,600 related deaths reported to the state’s Department of Public Health last year.

Last school year, 81 percent of kids in Massachusetts between the ages of 6 months and 17 years old got vaccinated against the flu. But Baker said the state “can do better, and we should.”

“Especially with the return of so many kids to college, it’s critically important that they get vaccinated as well,” Baker told reporters last month.

Massachusetts has long been a leader in required vaccines and first laid the groundwork for government standards after winning a Supreme Court decision in 1905 that upheld local smallpox vaccination orders.

More than 115 years later, all 50 states and Washington, D.C., have some kind of student vaccine requirement. Similar orders for health care workers are standard practice. And states including Arizona and Florida have laws that authorize mandatory vaccinations during public health emergencies or outbreaks.

Using that authority, Tan said, flu vaccine mandates “could spill over to Covid mandates” for students, “once a Covid vaccine is available for the pediatric population.”

Both illnesses have overlapping symptoms but typically require separate diagnostic tests. People can contract and spread both viruses at the same time. Covid-prevention strategies such as mask wearing, hand washing and social distancing can beat back the flu, but a tough season could overwhelm hospitals.

Massachusetts is not alone in mandating influenza vaccines this year. Many colleges — including Syracuse University, Indiana University, Cornell, Purdue and Johns Hopkins — are requiring flu shots for anyone who uses school facilities.

Out west, a University of California vice chancellor and two students have sued to block a systemwide flu shot mandate, alleging it “will likely lead to massive non-compliance, causing chaos and discontent in the UC community.” The temporary order UC leaders issued this summer allows exemptions on medical or religious grounds, and says “critical steps must be taken” to reduce the risk of severe disease and overwhelmed hospitals.

Even less strident orders have plenty of critics.

The University of North Carolina at Charlotte requires employees and students to report their flu shot or claim an exemption by Nov. 16, or lose access to school computer systems. The wary can cite “personal” differences for skipping the jab, unlike California, but school leaders are still catching heat.

“People email you and post on social media their thoughts all the time. … I would imagine that we will continue to hear that,” UNC-Charlotte Chancellor Sharon Gaber said. “Everybody has their individual perspective, and the right to their perspective. My job is to do what I, in consultation with others, think is the appropriate thing for the health of our community.”

“We recognize there are going to be real needs in the health care system,” Gaber said. “This is one way to hopefully reduce some of that strain.”