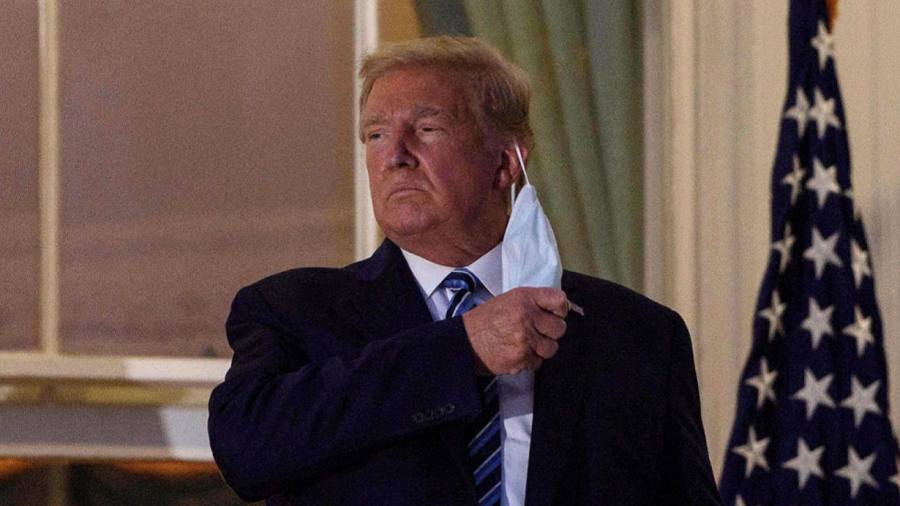 Donald Trump continued to play down the impact of his coronavirus infection on Tuesday, prompting warnings from social media platforms about the accuracy of his comments and fears among public health experts that his stance could worsen the pandemic.

As the president recovered from his illness in the White House following his return from Walter Reed medical centre on Monday, he attempted to use his experience as justification for his broader approach of keeping the country running even as case numbers tick up.

The president tweeted: “Many people every year, sometimes over 100,000, and despite the Vaccine, die from the Flu. Are we going to close down our Country? No, we have learnt to live with it, just like we are learning to live with Covid, in most populations far less lethal!!!”

Twitter flagged the post as “spreading harmful information about Covid-19”. Facebook took a similar one down altogether. According to the US Centers for Disease Control and Prevention, America’s worst flu season in recent years was in 2017-18 when roughly 61,000 people died. Covid-19 has been blamed for more than 210,000 deaths in the US this year.

Undeterred, the president pledged to attend his scheduled October 15 debate against Democratic presidential candidate Joe Biden in Miami, tweeting: “It will be great!”

In the past few days, Mr Trump has taken a car ride to wave to supporters, returned to the White House via helicopter and recorded a video from his residence without a mask on — all while doctors say he remains infectious.

Tom Frieden, the former head of the US Centers for Disease Control and Prevention, said: “There are at least 100,000 dead Americans because of the failure of this administration to control this disease. This episode has reiterated that [Mr Trump] has complete disregard for the safety of people in this country.”

“How are we supposed to tell our patients to go home and isolate for 10 days when they see the president taking car trips for no good reason at all?”

Doctors worry Mr Trump might still suffer an adverse reaction a week after contracting the illness, as has happened in some patients. Anthony Fauci, the head of the National Institute of Allergy and Infectious Diseases, told CNN on Monday night: “He looks fine [but] the issue is that it is still early enough in the disease. Sometimes when you’re five to eight days in you can have a reversal.”

Video: US 2020 election: coronavirus and the battleground states

The president’s team hope he can use his experience to his electoral advantage and overturn his significant poll deficit with just four weeks to go until election day. A poll by SSRS, published on Tuesday morning by CNN, showed Mr Biden leading Mr Trump by 16 points nationwide.

Some Republican strategists worry, however, that Mr Trump’s behaviour in the past few days could eliminate any sympathy voters might otherwise have had for his condition.

Brendan Buck, a former adviser to Paul Ryan, the former Republican speaker of the House of Representatives, said: “It is basic common sense that [Mr Trump] is defying here, and it is difficult to imagine any voters who are not already in the bag for him look at this and think, ‘Here is a person who should be in charge’.

“He has taken what should have been an opportunity for him and blown it up because of his own personal insecurity — it is one of the most Trump-like things I have ever seen.”

[ad_1] August is National Catfish Month, and the University of Arkansas at Pine Bluff …