A former chief scientific adviser to the British government has said COVID-19 will likely be around forever, and that regular vaccination will be needed to contain the coronavirus and prevent it from spreading.

“This is a virus that is going to be with us forever in some form or another, and almost certainly will require repeated vaccinations,” Sir Mark Walport told the BBC in an interview Saturday. “So, a bit like flu, people will need re-vaccination at regular intervals.”

Unlike diseases such as smallpox, “which could be eradicated by vaccination,” Walport said the novel coronavirus was more like influenza, requiring people around the globe to be inoculated “at regular intervals.”

Walport was not referring to the global pandemic continuing, but rather to the virus remaining a recurring problem even after the pandemic itself has been brought under control.

His comments came a day after WHO chief Tedros Adhanom Ghebreyesus’s comments that the pandemic could be over in two years, noting the Spanish Flu lasted from 1918 to 1920.

Walport, a member of the Scientific Advisory Group for Emergencies, stressed the global population is now much larger and that denser living conditions and increased travel allow the virus to spread more easily.

He also expressed concern over rising infection rates in Europe and elsewhere in the world, warning the pandemic could again get “out of control.” 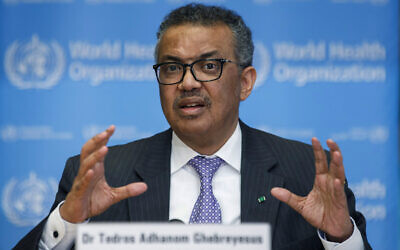 Tedros Adhanom Ghebreyesus, director-general of the World Health Organization, speaks during a news conference on updates regarding the novel coronavirus, at the WHO headquarters in Geneva, Switzerland. (Salvatore Di Nolfi/Keystone via AP, file)

In his comments Friday, Tedros sought to draw favorable comparisons with the notorious flu pandemic of 1918.

“We have a disadvantage of globalization, closeness, connectedness, but an advantage of better technology, so we hope to finish this pandemic before less than two years,” he told reporters.

By “utilizing the available tools to the maximum and hoping that we can have additional tools like vaccines, I think we can finish it in a shorter time than the 1918 flu,” he said.

“The fastest way to end this pandemic and to reopen economies is to start by protecting the highest risk populations everywhere, rather than the entire populations of just some countries,” he told a virtual press conference.

On Saturday, the global death toll from the coronavirus surpassed 800,000, with numerous countries ramping up restrictions in an effort to battle an eruption of new cases.

AFP contributed to this report.