July 27, 2021
Home Health News There's a light at the end of the tunnel, but coming months will be Covid-19 'worst-case scenario,' expert says – CNN 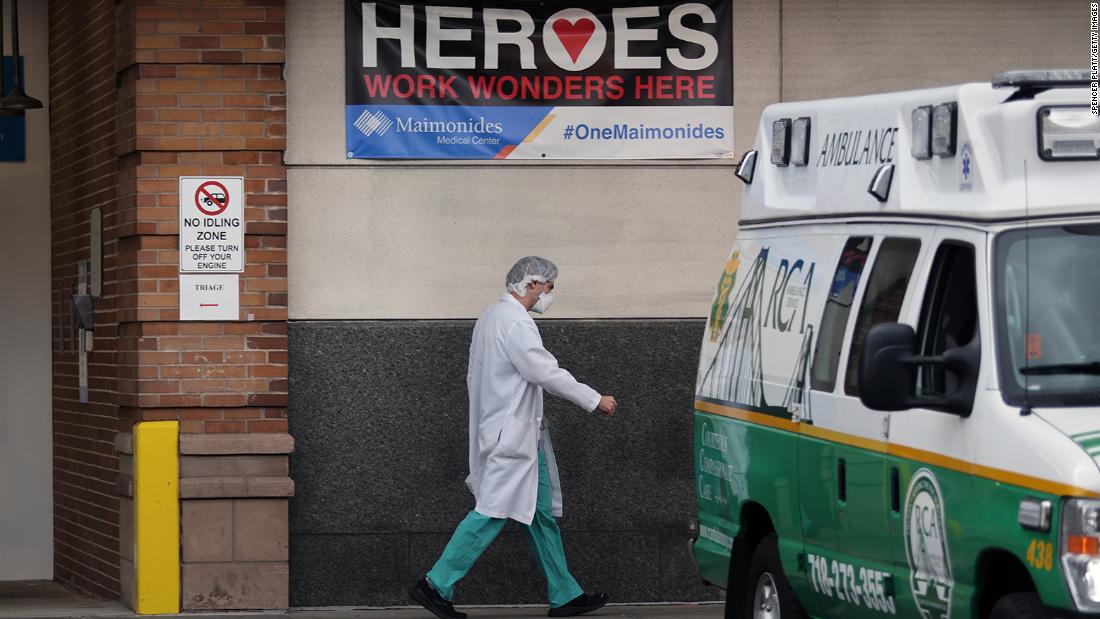 What will come next is likely the country’s “worst-case scenario in terms of overwhelmed hospitals, in terms of the death count,” according to emergency medicine physician Dr. Leana Wen.
“There’s just so much virus in our communities right now,” she said.
Her words echoed a bleak forecast by Centers for Disease Control and Prevention Director Dr. Robert Redfield, who warned Wednesday the next three months are going to be “the most difficult in the public health history of this nation.”
It’s a grim reality already reflected in the numbers. The past two days have each seen more than 200,000 daily new cases. And as infection numbers surge, the US has been adding one million cases to its total tally every six days for the past three weeks.
Hospitalizations also reached six figures for the first time ever this week, with now more than 100,600 Covid-19 patients nationwide, according to the COVID Tracking Project.
And for the second day in a row, Thursday the US reported more than 2,800 Covid-19 deaths — breaking a grim record the country had set just a day earlier.
The University of Washington’s Institute for Health Metrics and Evaluation now projects 262,000 more people will die over the next four months — predicting daily deaths will peak at more than 2,900 mid-January.
Vaccinations will likely not have a big impact on the number of deaths by April 1, but universal mask usage could, the IHME team said in a Friday update.
“Scaling up mask use to 95% can save 66,000 lives by April 1,” the team said.

Leading health officials have long warned that rising cases would be followed by higher hospitalization numbers that could cripple health care systems across the country. Hospitals and experts all over the US are now sounding the alarm.
Marvin O’Quinn, the president and chief operating officer of CommonSpirit Health, which runs hospitals in 21 states, told CNN they’re seeing increases in patients in every single hospital.
“We are now up to roughly 2,100 positive cases in our hospitals. That’s an increase of almost 70% since November 11,” O’Quinn said. “We’re seeing about 70 to 100 new cases every day.”
In Pennsylvania, just under 5,000 people are hospitalized with Covid-19, and two parts of the state are inching closer to staffing shortages, Secretary of Health Dr. Rachel Levine said Thursday.
“It is so important to remember that all of us have to be mindful, that we all have a role to play in what is happening in the hospitals right now,” Levine said. “You might not need hospital care right now; you might not have a loved one in the hospital right now. But what is happening in our hospitals has a direct impact on you. It has a direct impact on the mitigation steps you have to take in order to contain the spread of the virus.”
“The people who make our health care system work are relying on you to do the right thing,” she continued.
In Ohio, Gov. Mike DeWine warned hospitals were not only in a crisis, but that “the crisis is worsening and getting more serious.”
Dr. Andy Thomas, of the Ohio State University Wexner Medical Center, told reporters that one third of ICU patients statewide were Covid-19 positive. In some rural hospitals, Covid-19 patients made up as much as 60% of the ICU population, Thomas added.
“That’s not sustainable for those hospitals to be able to manage,” Thomas said. “The hardest area for hospitals to increase their capacity, or increase their number of beds, is in the intensive care unit.”
And hospitals nationwide have yet to see the impacts that Thanksgiving gatherings and travel could bring — with another surge projected to start taking shape in the coming weeks.
Michael Osterholm, a member of President-elect Joe Biden’s Transition Covid-19 Advisory Board, said measures are urgently needed to help curb the spread and prevent hospitals from being “overrun.”
“I’d rather do it now and try to avoid the cases of the future than wait to try to put this in place when the house is so on fire that in fact, we have crossed our case cliff and hospitals basically are literally overrun,” he said. ‘That’s what we’re up against.”

In California, hospitals are treating about 2,066 Covid-19 patients in intensive care units, according to data from the state’s health department. That’s the highest number since the pandemic’s start.
The grim figure comes as Gov. Gavin Newsom announced a strict regional stay-at-home order. The order will go into effect 48 hours after hospital intensive care unit capacity drops below 15% in one of five regions the state is divided into: Northern California, Bay Area, Greater Sacramento, San Joaquin Valley and Southern California.
Projections show four of those five regions will reach that threshold in the coming days, with only the Bay Area expected to remain open until mid-to-late December, Newsom said.
“We are at a tipping point in our fight against the virus and we need to take decisive action now to prevent California’s hospital system from being overwhelmed in the coming weeks,” he said.
Delaware Gov. John Carney announced Thursday a stay-at-home advisory, telling residents to avoid indoor gatherings with anyone outside their household from December 14 through January 11. The state will also require residents to wear a cloth face covering every time they’re indoors with someone who isn’t in their household, the governor’s office said.
“A vaccine is on the way but, make no mistake, we are facing the most difficult few months of this crisis,” the governor said in a statement. “I know we’re all tired of COVID-19 — but it’s not tired of us. We’re pleading with Delawareans to do the right thing.”
Meanwhile, the lockdown on the Navajo Nation set to expire at the end of this weekend will now be extended for another three weeks.
“Our health care experts are now saying that the current wave or surge is far more severe and troublesome than the wave that we saw in April and May,” President Jonathan Nez said Thursday in a written statement.
Under the lockdown, Navajo citizens have been required to remain at home at all times, except for essential activities, emergencies and outdoor exercise.

Meanwhile, local and state leaders have begun giving updates on when they expect their first batches of vaccines to arrive. No vaccine has yet received emergency use authorization from the Food and Drug Administration.
New York City Mayor Bill de Blasio said Thursday the city is expected to get the first round of Covid-19 vaccines in about 12 days. The initial doses will come from Pfizer and about a week later, the city will get vaccines from Moderna, de Blasio said.
The priority will be to give vaccines to high-risk health care workers and workers and residents of nursing homes, the mayor said.
“Over time, there will be enough vaccines for everyone,” de Blasio said, but for now, the city is working on the “fastest most effective distribution.”
In New Hampshire, the governor announced the state expects to receive the first doses of Pfizer’s vaccine in the third week of December, adding the Moderna vaccine will come the week after.
Massachusetts Gov. Charlie Baker said he expects about 300,000 doses of a Covid-19 vaccine by the end of the month. Health care workers and long-term care facility residents and staff are “absolutely going to be up near the top of the list” for the first doses, Baker said, as the state prepares to officially release its distribution plan Friday.
Redfield, head of the CDC, has accepted the Covid-19 vaccine recommendations that were voted on this week by the agency’s Advisory Committee on Immunization Practices.
The advisers voted 13-1 Tuesday to recommend that health care workers and residents of long-term care facilities be first in line for any vaccine that is authorized by the FDA. But top federal health officials say the CDC guidance is just that — guidance.
States can use those recommendations as well as the advice of other experts to come up with the best allocation plans for their residents, based on their own circumstances, Health and Human Services Secretary Alex Azar said Thursday.

What challenges remain ahead

Top health officials are continuously working to determine how distribution of a vaccine would best work across different communities, once one gets the green light.
“There’s a huge gap between a loading dock and an individual’s arm,” said Rick Bright, a member of Biden’s Transition Covid-19 Advisory Board. “We’re looking very closely at the complicated pathway between manufacturing the vaccine and actually delivering and administering that vaccine.
“We understand that there’s a lot of work that still needs to be done at the local level, at the state level and the tribal and territory level to make sure that there is infrastructure in place to be able to administer those vaccines, to make sure there are people in place and are trained to be able to administer those vaccines,” he said.
Furthermore, he said, there’s still work being done to ensure there are messengers in every community that are informing residents “in every language that’s required to make sure people could understand the value of that vaccine and trust that vaccine and line up to take that vaccine.”
The biggest challenge is still ahead, according to Dr. Marcella Nunez-Smith, co-chair of the advisory board.
“In some of our hardest hit communities, we know that there is quite a degree of vaccine hesitance and caution,” she told NBC News.
“What we have to do is find out what questions people have,” she said. “At the same time, we have to acknowledge that trust has decayed between Americans and the federal government and it will take work to rebuild and restore that confidence.”

[ad_1] Hope for treating the novel coronavirus could be on the horizon, as the …