After months of crowded events and often maskless encounters, a growing number of top government officials, including President Trump, and their close contacts have tested positive for the coronavirus.

The fault for the outbreak lies in no small part with an ill-conceived disease-prevention strategy at the White House, health experts said: From the early days of the pandemic, federal officials have relied too heavily on one company’s rapid tests, with little or no mechanism to identify and contain cases that fell through the diagnostic cracks.

“It seems the White House put all their eggs in one basket: testing,” said Dr. Megan Ranney, an emergency medicine physician at Brown University. “But there is no single strategy, no single thing we can do to be safe. It has to be multimodal.”

Other health experts noted that the tests deployed by the White House, manufactured by Abbott Laboratories, were given emergency clearance by the Food and Drug Administration only for people “within the first seven days of the onset of symptoms.” But they were used incorrectly, to screen people who were not showing any signs of illness. Such off-label use, experts said, further compromised a strategy that presumably was designed to keep leading officials safe from a pandemic that so far has killed more than 210,000 Americans.

“It’s not being used for the intended purpose,” said Syra Madad, an infectious disease epidemiologist based in New York. “So there will be potentially a lot of false negatives and false positives.”

Abbott’s rapid coronavirus tests, called the ID NOW and BinaxNOW, are speedy, portable and easy to operate, delivering results in minutes. But the convenience comes at a cost: The products are less accurate than laboratory tests that use a technique called polymerase chain reaction, or P.C.R., and they more frequently miss infections or mistakenly designate healthy people as infected, as happened to Gov. Mike DeWine of Ohio in August. 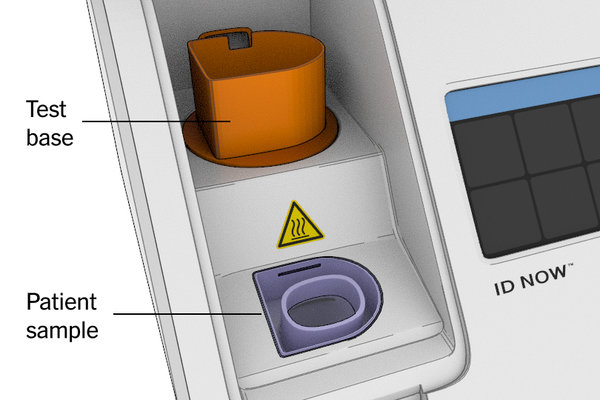 During the course of the pandemic, the Trump administration has relied on rapid coronavirus tests, including one that had been found to sometimes miss infections.

Nonetheless, shortly after Abbott’s ID NOW test received emergency approval from the F.D.A. in the spring, the White House adopted it as a rapid screening tool for staff members and visitors who came into close contact with the president. Sometime around the end of August or early September, the White House switched to using the BinaxNOW — a similarly quick test that hunts for bits of coronavirus protein rather than viral RNA — according to a senior administration official.

Federal officials recently purchased the BinaxNOW to distribute by the millions to governors and vulnerable communities around the country. Rapid tests have been hailed by some experts as a welcome solution to the lengthy delays that have plagued expensive laboratory tests, although the products come with problems of their own.

People without Covid-19 symptoms have been among those taking the test on White House grounds, where individuals who received negative results were granted swift access to the president and his advisers.

Dr. Scott Gottlieb, the former commissioner of the F.D.A., described these procedures as a misguided attempt at a “zero-fail testing protocol” in an interview on CBS’ “Face the Nation” on Sunday, saying that officials “weren’t taking any precautions beyond testing people who are going to be in contact with the president.”

However, according to the products’ packaging, both Abbott rapid tests are intended for people with Covid-19 symptoms, early on in their illness. When Abbott submitted the tests for emergency authorization from the F.D.A., the company provided data only for people with symptoms. When used appropriately, the company has said, both tests perform about 95 percent as well as P.C.R. But how well the products do in asymptomatic individuals remains murky.

In a statement, Darcy Ross, Abbott’s senior director of external communications, said the instructions that came with both products gave physicians the power to administer tests at their discretion, regardless of whether the recipients had symptoms. “As with all tests that have received an E.U.A., a health care provider will determine if a person needs a Covid-19 test,” she said.

Dr. Krutika Kuppalli, an infectious disease physician based in South Carolina, said she would not feel comfortable administering such tests to healthy patients: “We don’t have data to show how this test is going to perform in that population.”

Abbott was not required to submit data evaluating either test’s performance in asymptomatic populations when applying for emergency approval from the F.D.A. But Ms. Ross confirmed that such studies are underway, and the company has told experts that it thinks asymptomatic testing is likely to pan out.

On Saturday evening, Andrea Wainer, Abbott’s executive vice president of rapid and molecular diagnostics, emailed a document entitled “Perspectives on Testing” to several public health experts, including Dr. Ashish Jha, dean of the Brown University School of Public Health, containing preliminary results outlining the ID NOW’s performance in people without symptoms. Among an unspecified number of individuals, the test picked up about 88 percent of the infections found by laboratory P.C.R. tests, the company statement said. Numbers were not reported for the BinaxNOW.

“By studying the test in the asymptomatic people, Abbott knows it works in that population,” the document said. “It can’t say that for itself, because the test isn’t approved for that, but that data has been shared with others and the F.D.A. too.”

In response to queries about the document, Ms. Ross said the data had been collected from “a few dozen individuals.”

Susan Butler-Wu, a clinical microbiologist at the University of Southern California, expressed concern about the private release of the data. Without more transparency about how and when the results were achieved, and in whom, she said, “I have to take their numbers with a grain of salt.” Dr. Butler-Wu also noted that tests like the ID NOW have produced lackluster results in the hands of other researchers, missing 25 percent or more infections in people with symptoms.

Even less data are available on the BinaxNOW, reportedly the principal test now used in the White House and a product that Adm. Brett Giroir, the senior official leading the administration’s testing effort, recently touted for off-label use on Twitter. The post provoked confusion and ire from health experts and members of the public.

“No, no, no,” said Dr. Butler-Wu, who recalled her dismay on seeing the tweet. “You can’t just take a product and off-label it and assume it’s happy days.”

Still, experts said, fault for the outbreak at the White House lay with officials who blindly trusted that testing alone could act as an impervious filter to the coronavirus. Even if Abbott’s tests had performed as well as advertised on everyone, regardless of symptoms, “it’s statistically impossible it wouldn’t have missed some infections,” Dr. Butler-Wu said. “And clearly, it did.”

White House officials have repeatedly declined to provide specific details about the testing procedures for staff members and visitors, sparking frustration among experts trying to assess the situation.

“There should be a very clear protocol that everyone could recite,” said Jennifer Nuzzo, an epidemiologist at Johns Hopkins University. Especially ambiguous, Dr. Nuzzo added, was how often people in the White House were taking tests, and under what circumstances, especially those who might not qualify as “close contacts” of the president. Any slip-ups could create ample opportunity for the coronavirus to hop into a new host.

On Monday, Kayleigh McEnany, the White House press secretary, announced that she had tested positive and would isolate herself. Ms. McEnany, who had been in close contact with several White House staff members who have since tested positive, had tested negative “every day since Thursday,” she said. But she was likely infectious for several days before her positive result, including on Sunday, experts said, when she spoke briefly without a mask to reporters outside the White House.

These and other encounters illustrated to Dr. Madad that officials were treating negative results as a free pass to eschew masks and to mingle, regardless of exposure history. “That’s absolutely incorrect,” Dr. Madad said.

Exposure to an infected person should be reason enough to quarantine for 14 days, according to the guidelines of the Centers for Disease Control and Prevention. A negative test result might simply be failing to pick up on low amounts of the coronavirus as the pathogen slowly accumulates in the body. Symptoms can take up to two weeks after an exposure to appear, if symptoms appear at all. And levels of the virus, which might correlate with contagiousness, can often be at their highest right before an infected person starts feeling ill.

Even people who remain asymptomatic throughout the duration of their infection are known to harbor the virus in abundance, and appear to be responsible for a large proportion of transmission events.

“The guidelines have been very clear,” Dr. Madad said. “Even if you have a negative test, you quarantine if you’ve been exposed.” White House officials, however, seem to have been emboldened by the false sense of security imbued by negative results, even though they represent only a snapshot in time.

To Dr. Jha, the White House’s unfolding outbreak was no surprise. “It’s remarkable that it hasn’t happened until now,” he said.

Pinning the protection strategy entirely on testing, while disregarding masks and physical distancing, he added, “shows they fundamentally don’t understand a negative test, and how infectious disease works.”