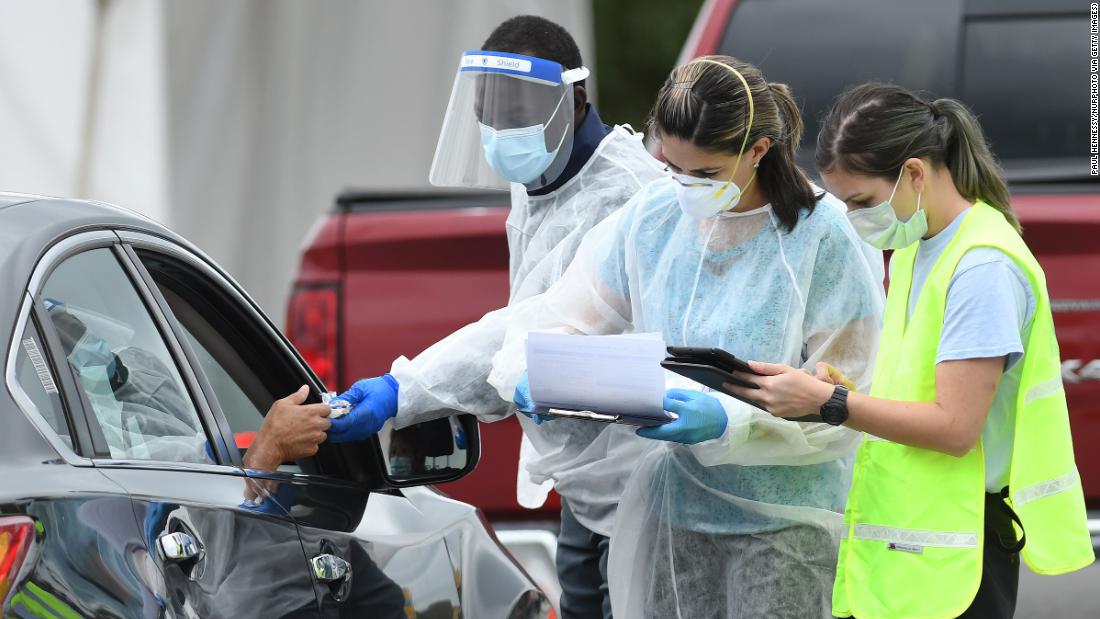 It’s a case count experts warn is far too high ahead of what’s forecast to be a challenging — and deadly — winter season. The latest US Centers for Disease Control and Prevention ensemble forecast says US Covid-19 deaths could reach 233,000 by the end of this month.
And projections from the University of Washington’s Institute for Health Metrics and Evaluation show more than 2,900 Americans could be dying daily by January.
Earlier this week, Dr. Anthony Fauci said he was “disturbed and concerned” by the country’s average case count.
“That’s no place to be when you’re trying to get your arms around an epidemic,” he said.
And as the weather gets colder, things will get tougher.
Gatherings will likely begin to move indoors, where the virus is more prone to spread. And as colleges battle outbreaks on campus, students soon returning to visit their families for the holidays could unknowingly bring the virus with them.
On top of that, it’ll be coupled with flu season to create what experts say could turn into a “twin-demic.” What could help, health officials have said, are flu shots and strong safety measures like masks and social distancing.
The high average case count comes alongside more worrying trends: only Alabama and Hawaii are reporting a decline of new cases over the past week, according to data from Johns Hopkins University. And nationwide, hospitalizations have begun to rise, with more than 34,000 hospitalized patients, according to the COVID Tracking Project.

Hospitalization trends are growing across the Midwest and in states of every other US region, with “especially worrisome signs” in Wisconsin, the project said. At least 41 states saw increased numbers of people requiring hospitalization this week, the project said Thursday.
Wisconsin announced it would open a field hospital next week to address the surge of patients.
“We obviously hoped this day wouldn’t come, but unfortunately, Wisconsin is in a much different and more dire place today, and our healthcare systems are being overwhelmed,” Gov. Tony Evers said in a news conference.
The state has seen some of the country’s most alarming trends recently: reporting record-high cases, hospitalizations and deaths in the past days.
But it’s not alone. Utah leaders said the state isn’t trailing far behind. And Iowa’s hospitalizations set a record this week with more than 460 Covid-19 patients across the state. Missouri’s health department also broke a record Wednesday, with more than 1,300 Covid-19 hospitalizations.
Arkansas, Montana, North Dakota, Oklahoma, South Dakota and Wyoming also saw record-high hospitalization numbers this week, according to the project’s data.

New Jersey Gov. Phil Murphy said Thursday the state reported more than 1,300 new Covid-19 cases, the highest number since late May.
“This is a sobering number,” the governor said, and later lashed out at the President, who recently told Americans not to let the virus “dominate.”
“To say this virus isn’t still with us, to say that it isn’t virulent, to say that it could not take your life is completely false. Every speck of that.” Murphy added.
Meanwhile, in neighboring New York, local officials are trying to get a hold of clusters that have broken out in several communities including in Brooklyn, Queens and Rockland and Orange counties.
In New York City, transmission is happening through close contacts and household members, the city’s Test and Trace Corps head Ted Long said this week.
To help curb the spread of the virus, the state recently imposed strict restrictions on areas where Covid-19 clusters are occurring, many of which have large Orthodox Jewish populations. Those restrictions included shutting down schools and most non-essential businesses and limiting crowds at houses of worship.
The new measures were met with protests by members of the Orthodox Jewish community and items were set on fire in Borough Park.
New York state Assemblyman Simcha Eichenstein said that he was “outraged” with Gov. Andrew Cuomo’s “draconian measures.”
“Let’s continue to use our voices in demanding what no one can take away from us — our ability to gather in prayer,” he said in a statement. “But we must do this peacefully because that’s what makes us who we are.”