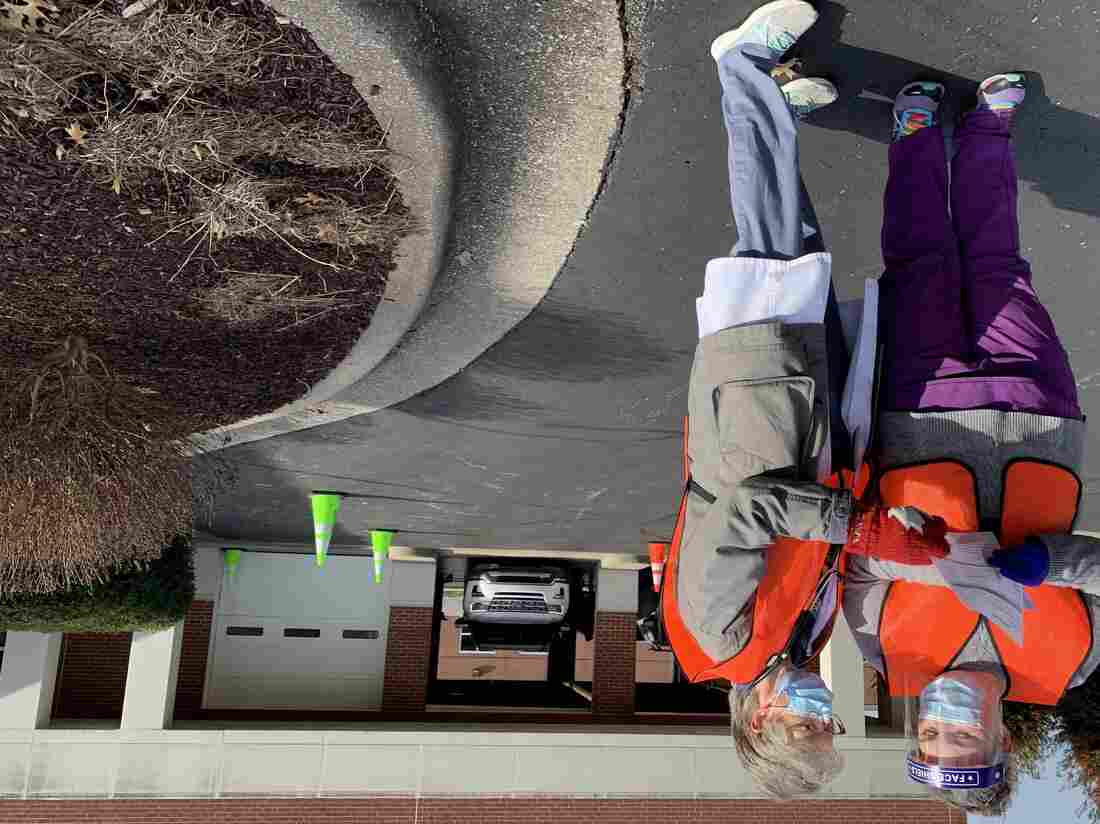 Dr. Lorraine MacDonald, right, the medical examiner in Rutherford County, Tennessee, talks to a public health worker giving shots at the county’s mass vaccination site, located in an old State Farm operations center. MacDonald says if people are able to sign up online, and their cars make it to the front of the line, health workers don’t question whether they qualify.

In December, all states began vaccinating only health care workers and residents and staffers of nursing homes in phase 1A, but since the new year began some states have also started giving shots to — or booking appointments for — certain categories of seniors and essential workers.

As the states start to widen the eligibility for who can get a COVID-19 vaccine, health officials are often taking people’s word that they qualify, thereby prioritizing efficiency over strict adherence to their own distribution plans.

“We are doing everything possible to vaccinate only those ‘in phase,’ but we won’t turn away someone who has scheduled their vaccine appointment and tells us that they are in phase if they do not have proof or ID,” says Bill Christian, spokesman for the Tennessee Department of Health.

Among the states pivoting to vaccinating seniors, timelines and strategies vary. Tennessee started offering shots to people 75 and older on Jan. 1. So Frank Bargatze of Murfreesboro, Tenn., snagged an appointment online for his father — and then went ahead and put his own name in, though he’s only 63.

“He’s 88,” Bargatze says, pointing to his father in the passenger seat after they both received their initial shots at a drive-through vaccination site in Murfreesboro, a large city outside of Nashville. “I jumped on his bandwagon,” he added with a laugh. “I’m going to blame it on him.”

Bargatze added that he does work a few days a week with people in recovery from addiction, so in a way, he might qualify as a health care worker.

Overwhelmed public health departments don’t have time to do much vetting, though some are trying more than others. Dr. Lorraine MacDonald is the medical examiner in Rutherford County, Tennessee, where she’s been staffing the vaccination site this week.

If people seeking the vaccine make it through the signup process online, MacDonald says, and show up for their appointment, health officials are not going to ask any more questions — as long as they’re on the list from the online signup.

“That’s a difficult one,” MacDonald acknowledged, when asked about people just under the age cutoff joining with older family members and putting themselves down for a dose, too. “It’s pretty much the honor system.”

People getting vaccinated in several Tennessee counties this week told a reporter they did not have to show ID or proof of qualifying employment when they arrived at a vaccination site. Tennessee’s health departments are generally erring on the side of simply giving the shot, even if the person is not a local resident or is not in the country legally.

The loose enforcement of the distribution phases extends to other parts of the country, including Los Angeles. In response, New York’s governor is considering making line-skipping a punishable offense.

Still, many people who don’t qualify on paper believe they might need the vaccine as much as those who do qualify in the initial phases.

Gayle Boyd of Murfreesboro is 74, meaning she doesn’t quite make the cutoff in Tennessee, which is age 75. But she’s also in remission from lung cancer, and so eager to get the vaccine and start getting back to a more normal life, that she joined her slightly older husband at the Murfreesboro vaccination site this week.

“Nobody’s really challenged me on it,” she says, noting that she made sure to tell vaccination staffers about her medical issues. “Everybody’s been exceptionally nice.”

Technically, in the state’s current vaccine plan, having a respiratory risk factor like lung cancer doesn’t leapfrog anyone into the current phase who doesn’t otherwise qualify. But in some neighboring states such as Georgia, where the age limit is 65, she would qualify right now.

Even for those who sympathize with such situations, anecdotes about line skipping tend to enrage many trying to wait their turn.

“We try to be responsible,” says 57-year-old Gina Kay Reid of Eagleville, Tenn.

Reid was also at the Murfreesboro vaccination site, sitting in the backseat as she accompanied her older husband and her mother. She says she didn’t think about trying to join them in getting their first doses of vaccine. “If you take one and don’t necessarily need it, you’re knocking out somebody else that is in that higher risk group.”

But there is a way for younger, healthier people to get the vaccine sooner than later — and not take a dose away from anyone more deserving.

A growing number of jurisdictions are realizing they have leftover doses at the end of every day. And the shots can’t be stored overnight once they’re thawed. So some pharmacists, such as some in Washington, D.C., are offering them to anyone nearby.

Jackson, Tenn., has established a “rapid response” list for anyone willing to make it down to the health department within 30 minutes. Dr. Lisa Piercey, who is the state’s health commissioner, says her own aunt and uncle received a call at 8 p.m. and rushed to the county vaccination site to get their doses.

Piercey calls it a “best practice” that she hopes other jurisdictions will adopt, offering a way for people eager for the vaccine to get it, while also helping states avoid wasting precious doses.