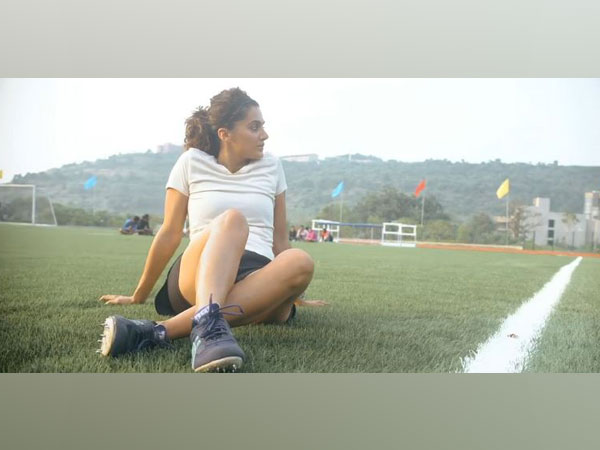 Mumbai (Maharashtra) [India], December 18 (ANI): Chronicling the inspirational journey of her upcoming sports drama ‘Rashmi Rocket’ and being active in sports from school days, actor Taapsee Pannu on Friday dropped a video to share her entire journey of transformation in achieving the perfect athletic body naturally.
The 33-year-old star took to Instagram and recalled that starting from the first standard on she won a medal every time she ran, and it was almost like a deja vu when she started shooting for ‘Rashmi Rocket’.
In the eight-minute-nineteen-seconds video, the ‘Saand Ki Aankh’ star is seen remembering her school time and said that she ran for the first time in the first standard and on every Sports Day in school till the fifth standard, the actor has been winning medals in race. Pannu said that she was very hyperactive kind, very competitive too. Explaining that her shoot for the film felt like a deja vu as she was back at the starting line, in the role of a sportsperson.
The actor also talked about her body transformation and said that she wanted to transform her body in a real believable way. Pannu’s trainers also said that the actor has used all-natural supplements and homemade meals for the body transformation.
The ‘Pink’ star further talked about how she decided to hit the gym and went through a serious injury which made her question the journey on the film. She then talked about how to get into the shape of a real sprinter and said that the team has succeeded to a larger extent.
She said, “For the longest time, people kept telling me that I’m ordinary and I honestly do believe that I’m ordinary, but then if this transformation is possible that means ordinary people are meant to do extraordinary things.”
The ‘Naam Shabana’ star captioned the video as, “Coz ordinary people are meant to do extra ordinary things…(khudi ko kar buland itana ki har taqadeer se pehle, khuda bande se khud puchhe bata teree raza kya hai.”
“Here it is….caption mein aur kuch likhne ko bacha nahi hai sab video mein bol diya,” added Pannu.
Directed by Akarsh Khurana and co-produced by Ronnie Screwvala, Neha Anand, and Pranjal Khandhdiya, the sports-drama that chronicles the story of a girl Rashmi and her journey from a tiny village to athletic contests is expected to release sometime in 2021. (ANI)

Disclaimer: The views expressed in the article above are those of the authors’ and do not necessarily represent or reflect the views of this publishing house. Unless otherwise noted, the author is writing in his/her personal capacity. They are not intended and should not be thought to represent official ideas, attitudes, or policies of any agency or institution.