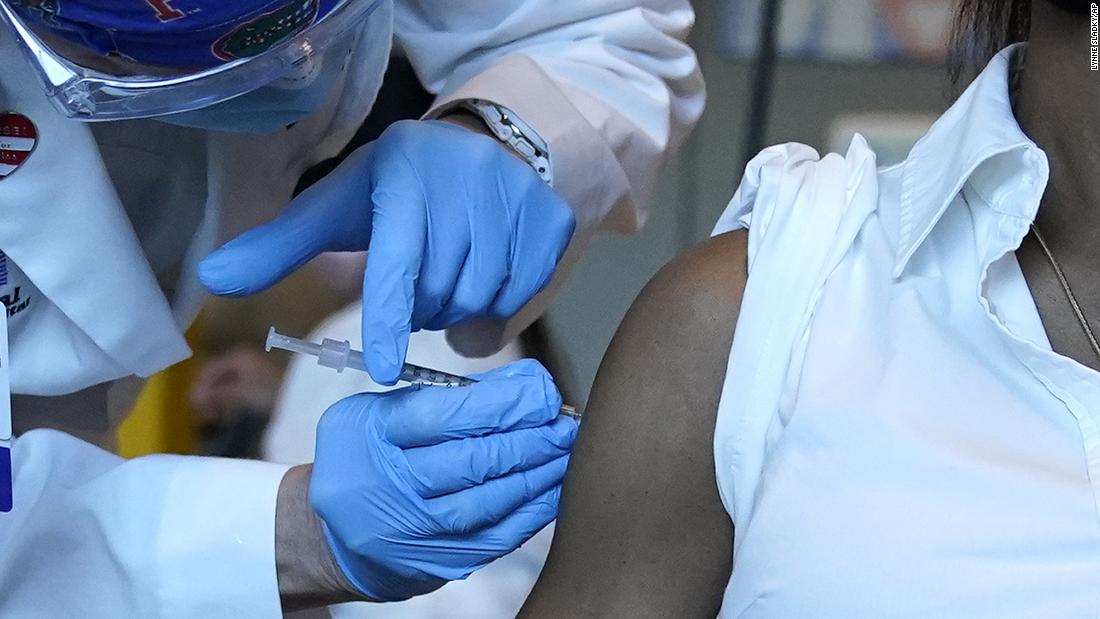 So far, the US has distributed more than 31 million Covid-19 vaccines to the states, but the CDC says only about 40% have actually been given to people, according to the latest data.
But the evidence shows the percentage of people vaccinated is likely much better than what the numbers suggest.
There’s lag time between when the states report their numbers to the CDC and there’s an additional reporting delay with the Martin Luther King Jr. holiday. For example, Michigan’s website says that as of Sunday, it’s given out 124,000 more doses than the CDC gives it credit for. The CDC numbers last updated Friday.
But even with that caveat, the country not only missed the Trump administration’s stated goal of vaccinating 20 million people by the end of December, it still hasn’t hit 20 million three weeks later.
Georgia has one of the lowest vaccination rates in the country, according to the CDC, although Georgia’s website, updated Sunday, shows that it’s given out 171,000 more than what the CDC counts.
At a news conference last Tuesday, Gov. Brian Kemp said his office had received reports that some large providers were holding back supplies. He warned them to provide doses “quickly,” or he’d seize them.
“If it takes me firing up my pickup truck and doing it myself, so be it,” Kemp said.
Georgia residents have called his office frustrated with the rollout and the supply.
“Yes, the phone lines will be busy. Yes, the websites will certainly crash,” Kemp said. “This is no doubt frustrating. I would prefer that we have ample supply, and we could vaccinate everyone immediately.”
Tennessee Department of Health Commissioner Dr. Lisa Piercey told the federal government that sites in her state had the capacity to vaccinate five times as many people as they are now.
“We’re doing great,” Piercey told CNN. “The only thing we’re missing is supply.”
Piercey said she has made it clear to her clinics they should hold nothing back. Their single goal, she said, should be “to run out of vaccine.”
“It is wholly unethical for us to sit on it,” Piercey said.
Minnesota Gov. Tim Walz on Monday called for the federal government to release more doses of the Covid-19 vaccine, saying that his state currently had “a very limited supply.”
Last week Walz signed onto a letter with other governors that urged the US to purchase as many vaccines as possible so states could get more shots in arms in the coming weeks.
Experts said the gap between distribution and administration has been closing as more clinics come online, like the one that opened Friday at Dodger Stadium. Last Monday, Los Angeles Mayor Eric Garcetti said once it’s fully operational, the clinic’s staff will be able to inoculate 12,000 people a day.
“If you look at the number of doses being administered by week, they are picking up the pace considerably compared to the first couple of weeks of the vaccination program,” said Dr. Kelly Moore, the deputy director of the Immunization Action Coalition, who has also run several prior vaccination campaigns. “As we have predicted, their capacity to deliver vaccines is increasing as they get accustomed to the process and work out the bugs in the system.”
Michigan is using the National Guard to augment the work of local clinics and the state is vaccinating people faster, according to Tricia Foster, the chief operating officer for Michigan’s Covid-19 response.
“We’ve jumped forward considerably in our doses in arms,” Foster said.
Foster said the CDC numbers don’t fully capture Michigan’s effort. Like in other states, part of the state’s allocation has been set aside for a long-term care vaccination program the federal government runs in Michigan. That program gets about 245,000 of the state’s total doses. The federal government only reports its numbers twice a week.
Michigan, she said, wants a much bigger supply and is “ready, willing and able” to vaccinate more. Michigan Gov. Gretchen Whitmer asked to buy vaccine doses directly from manufacturers, beyond what the federal government has contracted for, to meet state demand.
New York also wants to buy doses directly. The state website said it has given out about 72% of its doses as of Monday. State officials think the supply could run out by week’s end. Mount Sinai in New York City has temporarily suspended vaccine appointments between January 15 and 19 due to supply shortages, according to affiliate WABC.
New York Gov. Andrew Cuomo blamed the delays on the federal government. Cuomo said Monday he wrote to the president of Pfizer asking to buy doses directly.
“After myself and seven other governors called on the Trump Administration to release more doses, HHS Secretary Alex Azar said that relief was on the way. To date, however, the federal government has not acted on that promise — in fact, New York will received just 250,000 doses this week, 50,000 fewer than the week prior,” the letter said.
Pfizer responded that it was open to collaborating with the federal government on a distribution model that “gives as many Americans as possible access to our vaccine as quickly as possible. However, before we can sell directly to state governments, HHS would need to approve that proposal based on the EUA granted to Pfizer by the FDA.”
Vaccines cannot come soon enough. The incoming director the CDC, Dr. Rochelle Walensky, said Sunday the country could see “some dark weeks ahead,” predicting half a million deaths in the US by mid-February.