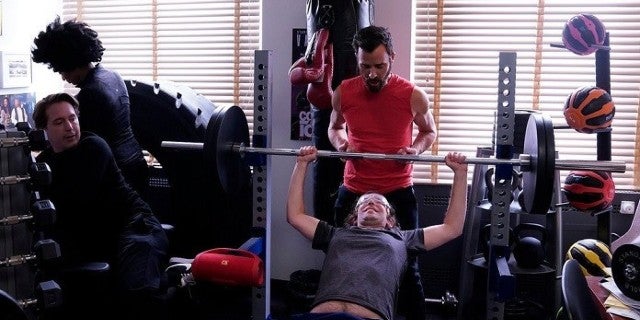 Actor Justin Theroux made a special guest appearance on Saturday Night Live this weekend, helping Kyle Mooney achieve a body transformation. The clip mirrored reality shows like The Biggest Loser as Mooney got into “fighting shape.” However, he lost a bit of his comedy edge along the way.

This weekend’s SNL Digital Short began with Mooney in the writing office he shares with Beck Bennett. The two were excited to have John Mulaney back as host, but neither had any good sketch ideas. Just then, Mulaney came into the office with a pitch.

“I’m gonna write this strip club sketch where all the guys play male strippers,” Mulaney said, “And I was just making sure that you, Beck, were okay with taking you shirt off.”

Mooney asked sheepishly if Mulaney would need him for the sketch, which confused him. “What as, like, an awkward guy?” Mulaney asked. “Oh, Kyle, I don’t know if you’re exactly built for that… I mean it’s like, come on, Kyle.”

The sketch then cut to a reality TV-style confessional, with Mooney musing on the fact that he is type-cast as “a dork.” It even showed a few throwbacks to prove it, including older sketches where Mooney played different kinds of nerds. He decided it was time to make a change, standing shirtless in front of a mirror in his office.

The next morning, Bennett arrived to find their office full of weights and Mooney lying on a bench press with Justin Theroux spotting him. A woman was making protein smoothies on Bennett’s desk, and they were blasting music.

“Just Theroux, dope to meet you,” Theroux said by way of greeting.

The sketch went on to some wild places, with Mooney wearing some remarkably convincing muscle suits. He was soon wearing neon tank tops to reveal his bulging muscles and working out in the hallways. However, along the way the cast joked about his flagging comedic sensibilities.

“He’s so hot, he’s going to get put in every comedy sketch,” Aidy Bryant joked.

Mooney’s spontaneity is clearly affected, as he says without a trace of irony: “I’m such a spaz. But that’s just me I guess, I love hiking, and my family.”

The final punchline, of course, is that Mooney makes it into the sketch he wanted to be in so badly, only to have it cut at the last minute. Mulaney tells him that now they’re only looking for “awkward guys,” and Mooney no longer fits the bill.

The sketch was one of the highlights of Mulaney’s third round hosting SNL. The episode is available to stream on Hulu in full or in clips on YouTube. SNL returns this Saturday with a new episode hosted by Daniel Craig and musical guest, The Weeknd.

[ad_1] In a disturbing new report from Politico, politically appointed cronies of the president …