Singapore has approved Pfizer-BioNTech’s novel coronavirus vaccine and expects to receive shots by year-end, Prime Minister Lee Hsien Loong said, adding that he planned to be among the early vaccine recipients.

Meanwhile, South Korea ordered schools to close from Tuesday in the capital Seoul and surrounding areas as it battles its worst outbreak of novel coronavirus since the pandemic began, surpassing the previous peak in February.

US President Donald Trump says top government officials will not be inoculated early against COVID-19, tweeting: “People working in the White House should receive the vaccine somewhat later in the program.”

Germany will get 11 million doses of BioNTech vaccine by March

In January alone, three million to four million doses of the vaccine will be provided for inoculations in Germany, a ministry spokesman said.

The total number of confirmed cases in Switzerland and neighbouring principality Liechtenstein increased to 384,557, including from mass testing in the Swiss canton of Grisons conducted Friday through Sunday.

The death toll rose by 193 to 5,589, while 445 new hospitalisations kept pressure on the healthcare system, as hospital directors write to Health Minister Alain Berset expressing their concerns.

Study adds to debate over Gilead’s remdesivir for COVID-19

A single-patient study conducted by British scientists has found that Gilead’s antiviral drug remdesivir could be highly effective against COVID-19, raising questions about previous studies that found it had no impact on death rates from the disease.

Published in the journal Nature Communications, the study describes how doctors who gave the drug to a patient with both COVID-19 and a rare immune disorder saw a marked improvement in his symptoms and the disappearance of the virus.

“Our patient’s unusual condition gave us a rare insight into the effectiveness of remdesivir as a treatment for coronavirus infection,” said Nicholas Matheson, who co-led the study at Cambridge University’s Institute of Therapeutic Immunology and Infectious Disease.

Civic and labor groups have urged the government to mobilise more beds and medical personnel from private hospitals to cope with hospital bed shortage amid a recent surge in coronavirus cases.

Public hospitals have received most local COVID-19 patients but have now reached the saturation point, according to media reports.

The number of newly confirmed cases hovers around 1,000 per day.

Singapore has approved Pfizer-BioNTech’s novel coronavirus vaccine and expects to receive shots by year-end, Prime Minister Lee Hsien Loong said, adding that he planned to be among the early vaccine recipients.

The city-state of 5.7 million people expects to have enough vaccines for everyone by the third quarter of 2021 and will make it free for citizens and long-term residents, Lee, 68, said.

Vaccination will be voluntary. 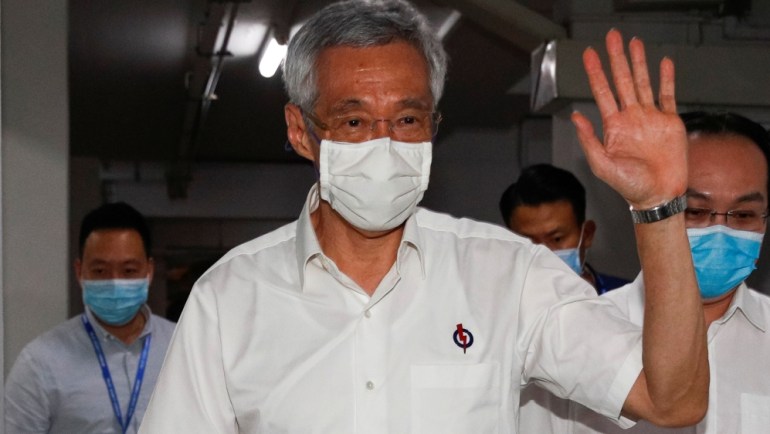 PM Lee Hsien Loong said he and other government officials would be among the early recipients after healthcare workers, other front-line personnel, the elderly and the vulnerable [File: Edgar Su/Reuters]2 hours ago (09:50 GMT)

The Japanese government has decided to suspend a travel subsidy programme dubbed “Go To Travel” from Dec. 28 to Jan. 11 nationwide, local media reported, responding to concerns about its impact on the spread of the coronavirus.

Media had widely reported earlier that the suspension would cover only the hardest-hit cities and regions such as the capital, Tokyo, and Nagoya, in central Japan.

Medical experts in Nigeria warn of second wave of COVID-19

Medical experts have warned that Nigeria will likely record a large increase in COVID-19 figures.

A principle reason for a potential second wave is because many people have abandoned safety precautions in recent weeks, according to professor of virology Oyewale Tomori.

Chief executive officer and director general of the Nigeria Centre for Disease Control, Chikwe Ihekweazu, told The Guardian: “There is the risk of a ‘second wave’ and many countries have begun to experience a spike in cases.”

South Korea ordered schools to close from Tuesday in the capital Seoul and surrounding areas as it battles its worst outbreak of novel coronavirus since the pandemic began, surpassing the previous peak in February.

Schools in the capital region would move classes online until the end of the month, in the latest ratcheting up of social distancing measures which so far have failed to reverse the spike in infections.

The school closure is a step towards the imposition of Phase 3 social distancing rules, a move that would essentially lock down Asia’s fourth-largest economy.

Ireland may need to reimpose COVID-19 curbs in January

Ireland may need to reimpose some COVID-19 restrictions in January, Prime Minister Micheal Martin said, after health chiefs warned that cases may be rising again following the reopening of most of the economy in the last two weeks.

“You could very well be looking at some further restrictions in January,” Martin told national broadcaster RTE, noting that the curbs lifted this month were not as strict as the initial lockdown.

He said the government would consult widely before making any decisions.

The French central bank said that it expects the country’s economy to recover more slowly than previously and return to its pre-pandemic level only in mid-2022.

The forecast is based on the COVID-19 pandemic not dying down immediately and widespread vaccination not being achieved before the end of 2021.

The Banque de France now sees economic output falling by nine percent this year, with a rebound of five percent in 2021.

Japan selected a kanji character used to encourage social distancing as its defining symbol for 2020, highlighting a catchphrase used extensively during the coronavirus pandemic that even inspired its own computer game.

The character “mitsu”, meaning “congested” or “dense”, was derived from a buzzword “San-mitsu”, which was central to Japan’s approach to the containing the pandemic.

Translated as “Three Cs” in English, it refers to avoiding closed spaces, crowds and close contacts.

Mexico’s health ministry reported 8,608 new confirmed cases of coronavirus infection and 249 additional fatalities, bringing the total in the country to 1,250,044 cases and 113,953  deaths.

The government says the real number of infected people is likely significantly higher than the confirmed cases.

Germany will likely be able to avoid another recession despite a second national lockdown in the coronavirus pandemic, due to start on Wednesday, Economy Minister Peter Altmaier said.

“I hope we can prevent a complete economic standstill in the second wave of the pandemic,” he told public radio Deutschlandfunk.

Germany’s CureVac announced that it has enrolled the first participant in the Phase 2b/3 study of its COVID-19 vaccine candidate.

The trial will assess the safety and efficacy in adults and is expected to include more than 35,000 participants in Europe and Latin America, it added in a statement

Malaysia’s Top Glove Corp has reported that a worker died on Saturday due to COVID-19, the first death since the outbreak at its dormitories and factories in October.

The world’s largest glove maker told Reuters in an email that the 29-year-old worker from Nepal had worked at its manufacturing facility in Klang, 40 km west of the capital Kuala Lumpur, for more than two years.

The outbreak at Top Glove’s facilities in which more than 5,000 workers tested positive was Malaysia’s largest cluster.

President Donald Trump says he is reversing an administration directive to vaccinate top government officials against COVID-19, while public distribution of the shot is limited to front-line health workers and people in nursing homes and long-term care facilities.

Trump made the announcement hours after his administration confirmed that senior US officials, including some White House aides who work in close proximity to Trump and Vice President Mike Pence, would be offered coronavirus vaccines as soon as this week under federal continuity of government plans.

“People working in the White House should receive the vaccine somewhat later in the program, unless specifically necessary,” Trump said in a tweet. “I have asked that this adjustment be made. I am not scheduled to take the vaccine, but look forward to doing so at the appropriate time.”

People working in the White House should receive the vaccine somewhat later in the program, unless specifically necessary. I have asked that this adjustment be made. I am not scheduled to take the vaccine, but look forward to doing so at the appropriate time. Thank you!

The number of confirmed coronavirus cases in Germany increased  by 16,362 to 1,337,078, data from the Robert Koch Institute (RKI) for infectious diseases showed.

Eswatini Prime Minister Ambrose Dlamini, who tested positive for COVID-19 four weeks ago, has died at age 52 after being hospitalised in neighbouring South Africa, the tiny absolute monarchy’s government said.

“Their Majesties have commanded that I inform the Nation of the sad and untimely passing away of His Excellency the Prime Minister Ambrose Mandvulo Dlamini. His Excellency passed on this afternoon while under medical care in a hospital in South Africa”, Deputy Prime Minister Themba Masuku said in a statement.