Members of Russia’s business and political elite have allegedly been given access to an experimental vaccine against the novel coronavirus since April, according to a report on Sunday.

The program, where members were given the opportunity to volunteer for doses of the vaccine “is legal but kept under wraps to avoid a crush of potential participants,” the media company reported, citing a researcher. 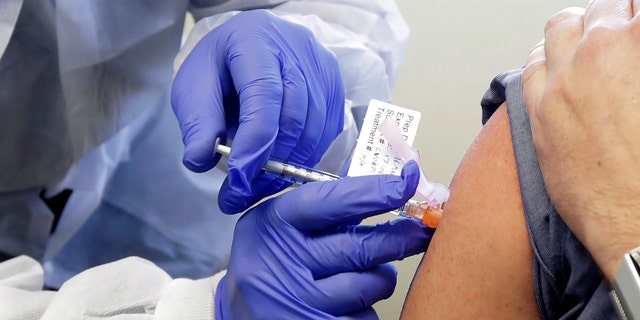 A subject receives a shot in the first-stage safety study clinical trial of a potential vaccine by Moderna for COVID-19, the disease caused by the new coronavirus on March 16, 2020. (AP Photo/Ted S. Warren, File)

“It’s not clear how participants are selected and they aren’t part of the official studies, though they are monitored and their results logged by the institute,” Bloomberg said.

The participants selected aren’t part of the official studies into the experimental vaccine, which is financed by the state-run Russian Direct Investment Fund (RDIF) and backed by the military, the media company reported. It recently completed a phase one trial involving Russian military personnel last week. The vaccine is essentially a common cold virus fused with the spike protein of SARS CoV-2 to prompt an immune response.

RDIF chief Kirill Dmitriev said last week that phase three trials will start on Aug. 3, according to Bloomberg. They will include thousands of people in Russia, Saudi Arabia, and the United Arab Emirates, with the vaccine potentially distributed nationally in September.

Gamaleya center head, Alexander Gintsburg, told Russian news agency Interfax that he wasn’t unaware of certain tycoons testing the candidate vaccine, while an assistant to Russia’s health minister said the shot had not yet entered “civilian circulation,” according to the Moscow Times.

Meanwhile, Dmitriev said he and his family had taken shots for the vaccine, adding that other volunteers have also been given the opportunity, Bloomberg reported. Patients normally take two shots at a Moscow clinic associated with the institute in order to produce an immune response. Some participants reported symptoms — including fever and muscle aches — after getting the shots.

The media company confirmed the identity of dozens who received the experimental vaccine, but none allowed their names to be published. Kremlin spokesman Dmitry Peskov didn’t respond to a message from Bloomberg asking if President Vladimir Putin or others in his administration have taken the shots.

“It is completely unacceptable that the Russian Intelligence Services are targeting those working to combat the coronavirus pandemic,” U.K.’s Foreign Secretary Dominic Raab said in a statement. “While others pursue their selfish interests with reckless behavior, the U.K. and its allies are getting on with the hard work of finding a vaccine and protecting global health.”

As of Monday morning, Russia has seen more than 770,311 total coronavirus cases and at least 12,323 deaths from the virus, according to data from Johns Hopkins University.