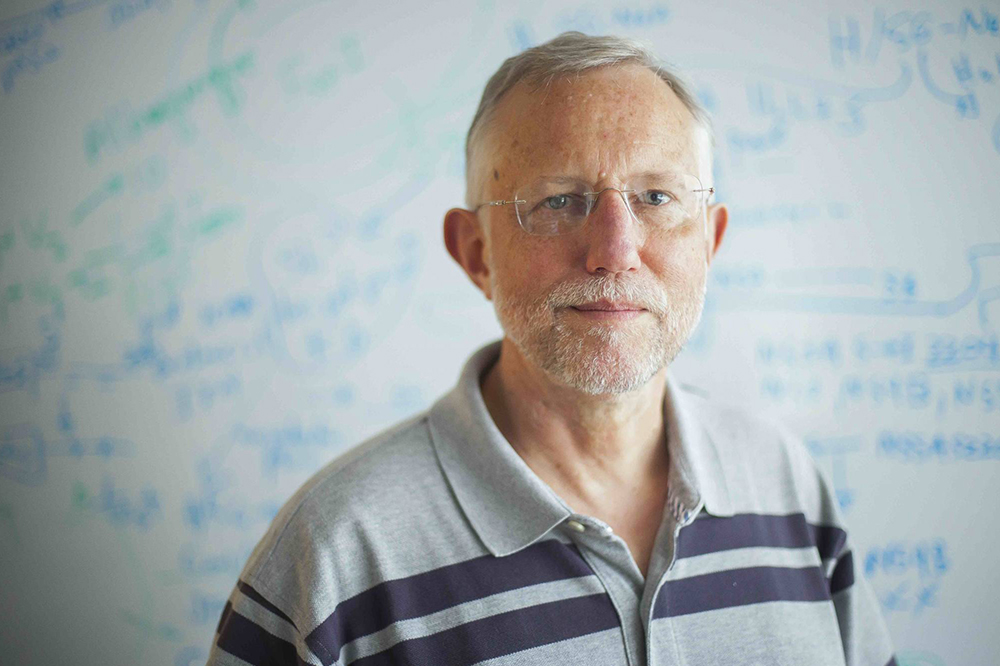 Charles M. Rice, who studies disease-causing viruses and how the immune system defends against them, is this year’s recipient of the Nobel Prize in Physiology or Medicine, the Nobel Foundation in Stockholm, Sweden, announced today. Rice is the Maurice R. and Corinne P. Greenberg Professor in Virology and Head of the Laboratory of Virology and Infectious Disease. He shares the prize with Harvey J. Alter of the National Institutes of Health and Michael Houghton of the University of Alberta.

Rice’s research directly contributed to a cure for hepatitis C, an aggressive disease that affects 170 million people worldwide. His lab worked on the virus for three decades and became the first to produce a version of it that could be cultured and studied in the laboratory. This milestone—which involved developing an edited version of the viral genome that replicates and produces viral proteins—led directly to the creation of three new classes of drugs to treat hepatitis C infection. Studies have shown that a combination of these drugs is able to reduce hepatitis C viral load to undetectable levels, effectively curing the disease.

“A chronic infection that has taken many lives, hepatitis C is now curable. Over time, this medical advance will save millions of lives and improve many more, and it is a direct result of Charlie’s research,” says Richard P. Lifton, The Rockefeller University’s president. “His work on viruses, including the signature achievement of growing hepatitis C in the lab, perfectly embodies this university’s mission: science for the benefit of humanity. I am thrilled that he has been selected for the Nobel Prize, the highest honor in science.”

Alter and Houghton originally cloned the genome of the hepatitis C virus in 1989, a major advance that enabled identification of people infected with the virus and elimination of the virus from the blood supply. However, for years efforts to propagate the virus in liver cells in the lab—crucial to further study and the development of medicine—failed. Rice demonstrated that the reason was that the end of the viral genome, required for the initiation of viral replication, was missing. He completed the characterization of the viral genome in 1996 and a year later was successful in producing an infectious virus in the lab.

He went on to develop sub-genomic amplicons of the virus that could replicate in cells without producing live virus, which made it possible to design assays to test for drugs capable of directly inhibiting viral replication. By 2013 the first in a series of such drugs, developed with the help of Rice’s technology, received FDA approval for use in patients. Several are now available, and in combination they can cure the vast majority of people with hepatitis C after a short course of treatment with virtually no toxicity.

In addition, Rice’s group has developed methods to test factors that limit infection in hepatitis C, hepatitis B, influenza A, dengue, yellow fever, Zika, chikungunya, and coronavirus. In response to the COVID-19 pandemic, Rice has used CRISPR technology to identify novel therapeutic targets for SARS-CoV-2, and translated techniques developed in his hepatitis C work to screen drugs for the ability to inhibit the coronavirus—work which is currently ongoing.

Rice is the 26th scientist associated with The Rockefeller University to be honored with the Nobel Prize. In addition to Rice, four other Nobel Prize winners are current members of the Rockefeller faculty: Michael W. Young (2017), Roderick MacKinnon (2003), Paul Nurse (2001), and Torsten Wiesel (1981).

Born in Sacramento, CA, in 1952, Rice received his Ph.D. in biochemistry in 1981 from the California Institute of Technology, where he stayed on as a postdoctoral research fellow from 1981 to 1985. Before he joined Rockefeller in 2001, he spent 14 years on the faculty of the Washington University School of Medicine. He is a member of the National Academy of Sciences and a previous recipient of the 2007 M.W. Beijerinck Virology Prize, the 2015 Robert Koch Award, the 2016 InBev-Baillet Latour Health Prize, and the 2016 Lasker-DeBakey Clinical Medical Research Award.

Read an interview with Rice in Seek magazine, and check back on this page soon for additional content, including video from an online press conference with Rice hosted by Rockefeller this morning.