Dolph Ziggler is doing everything in his power to get into the head of the WWE champion Drew McIntyre. On this week’s edition of RAW, Ziggler went on a little emotional route.

He brought back McIntyre’s former compatriot from “3 Man Band”. We are talking about recently released WWE star Heath Slater. However, this Slater was very different from the one we were used to see.

He has developed a completely ripped physique.

The segment started with the champ cutting a promo. Dolph Ziggler interrupted and again attacked McIntyre’s past.

Ziggler spoke about the years from 2014 -2017 went McIntyre wasn’t around.

He later went on to say that there is a list of people The Scottish wrestler has forgotten about since becoming champion.

Out walked Heath Slater. Heath Slater and McIntyre were together in the 3MB. Those were the struggle years of McIntyre.

The chosen one would sometimes be on the mid-cards but most of the time on pre-show of PPV’s.

The trio consisting of Heath Slater, Jinder Mahal, and Drew McIntyre would job to almost every Superstar on the roster.

Heath Slater would then tell the champ about their days in the 3MB. He would go on to talk about McIntyre as a part of his family.

Slater spoke about watching McIntyre win against Brock Lesnar from his couch as he shed tears of joy for his friend.

The former tag team champ called McIntyre post his release all those years ago but the new champ never responded. 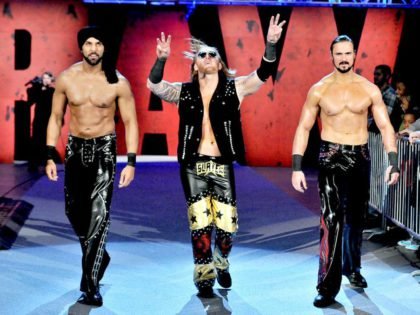 A returning Heath Slater asked The Scottish Psychopath for a match politely to which he first refused.

Interestingly, Slater then slapped McIntyre to instigate him, and the champ accepted.

The match finished even before it started. The Chosen One lived up to the words on his t-shirt – ” Talk Less, Clay More.”

Post the match, Ziggler attacked Slater because of his failed attempt. The champ could not see his friend getting battered even though they just had a rough moment.

The Scottish Psychopath saved Slater and both embraced each other. The duo then held the 3MB sign up high.

Heath is my brother, something I now realize you never were Dolph. I took pity on you at first, but after that stunt tonight I’m going to severely hurt you. Extreme Rules can’t come soon enough pic.twitter.com/nYtNmggUiX

Dolph Ziggler is scheduled to face Drew McIntyre at The Extreme Rules Horror Show for the WWE championship. The Show-off didn’t reveal the stipulation this week.

The PPV match card has some incredible performers on the list. However, many title matches are still ‘ordinary’ matches.

As it stands, these matches don’t match the name Extreme in the PPV event.

With a fortnight to go, One will have to wait and see what changes WWE further makes to the PPV.