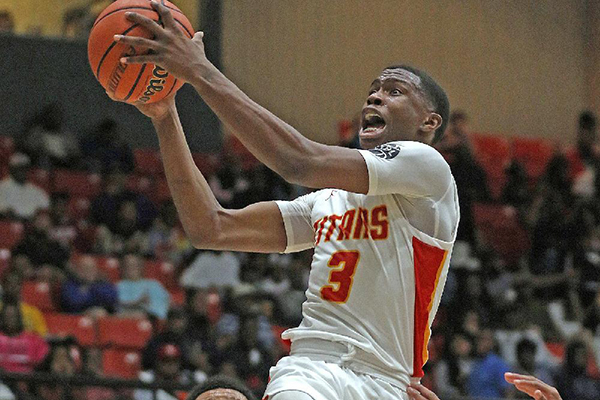 Davonte Davis always has been adamant about finding ways to improve his game on the basketball court, but the work the point guard has put in this offseason is unprecedented for him.

“I’ve been doing a lot of strength and conditioning since the season ended,” he said. “I’ve been working out, of course, but I wanted to get bigger before moving on to college. That was a key point of emphasis for me.

“I’ve been getting in the gym, too, but I’ve been trying to get in the best shape possible to prepare me for what I’m about to face at Arkansas.”

Davis’ body transformation is sure to generate a few double takes when he suits up for the University of Arkansas next season. But even as a lanky point guard during his high school career in Jacksonville, Davis turned enough heads to earn the Arkansas Democrat-Gazette’s All-Arkansas Preps Male Athlete of the Year award for the 2019-2020 school year.

“I’m going to always continue to work hard no matter what,” Davis said. “In Fayetteville, I’m going to do the same thing, work hard and practice hard. I’m never really satisfied, so I’m always trying to get better, whether it’s improving my ball-handling or working harder and harder on my weaknesses.”

Or in this particular scenario, bulking up to prepare for the grind of an SEC schedule.

Davis’ weight hovered around the 175-pound mark for most of his senior season, but he’s added 10 extra pounds of muscle to that frame since.

Davis didn’t envision Division I guards pushing him around even prior to the muscle gain, but he wanted to give them another reason to think twice about trying.

“I work out three times a day, sometimes four,” said Davis, who averaged 21 points, 10 rebounds, 8 assists and 3 steals for a Titans’ team that earned a share of the Class 5A state championship. “In the morning, I go to the track for conditioning, then I’ll go lift weights at a gym in Little Rock. After that, I usually go work out with my uncle.

“From then on, I go work out by myself later that night. It may be just a lot of film watching of myself or maybe just going to shoot around, things like that. But I do that pretty much every single day.”

Davis also altered his eating habits after talking with a nutritionist at Arkansas, who guided him on what steps to take to meet his goals.

“We had conversations,” he said. “I told her how big I wanted to get, how much I wanted to weigh, things of that nature. She gave me meal plans, different snack ideas that I could eat between workouts. Told me how much water I needed to drink.

“For me, just being able to eat the right things and make sure I eat them at the right time throughout the day was big.”

The next step for Davis is testing out his new build against his teammates. The Razorbacks have gotten a lot of praise from several preseason publications, particularly because of a 2020 recruiting class that includes Davis, Khalen Robinson, Moses Moody and Jaylin Williams. All four are native Arkansans, but Davis is looking forward to branching out on is own, too.

“Just experiencing new cultures and meeting new people,” he said. “Of course, I stay in Jacksonville, and it’s not as big as Fayetteville. So just going up there and seeing how different it is, I’m excited about that for sure.

“But I’m still going to do the things I need to do to be the best player I can be on the basketball court to try to help us get wins. If that includes me getting rebounds or me passing the ball and getting multiple assists each game, I’m going to do it. Even if it takes me scoring the ball sometimes, I’ll do that. Whatever it takes for us to win, I’m going to bring that to the table.”