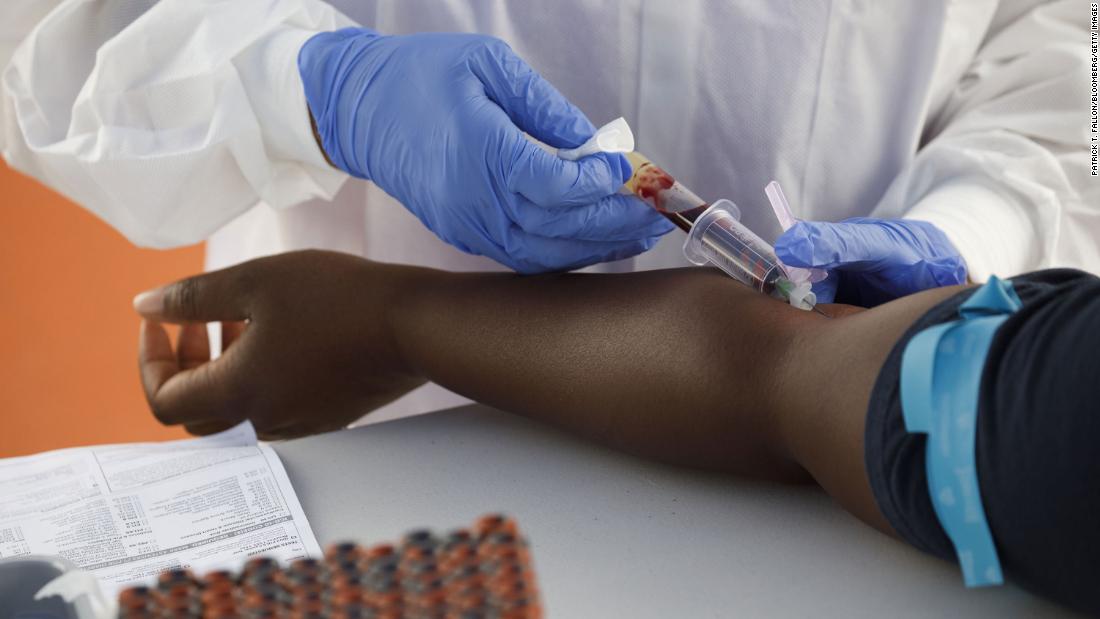 The research provides further evidence that blood type (also known as blood group) may play a role in a person’s susceptibility to infection and their chance of having a severe bout of the disease. The reasons for this link aren’t clear and more research is needed to say what implications, if any, it has for patients.

A Danish study found that among 473,654 people who were tested for Covid-19, only 38.4% with blood type O tested positive — even though, among a group of 2.2 million people who were not tested, that blood type made up 41.7% of the population.
In the other study, researchers in Canada found that among 95 patients critically ill with Covid-19, a higher proportion with blood type A or AB — 84% — required mechanical ventilation compared with patients with blood group O or B, which was 61%.
The Canadian study also found those with blood type A or AB had a longer stay in the intensive care unit, a median of 13.5 days, compared with those with blood group O or B, who had a median of nine days.
“As a clinician … it is at the back of my mind when I look at patients and stratify them. But in terms of a definitive marker we need repeated findings across many jurisdictions that show the same thing,” said Dr. Mypinder Sekhon, an intensive care physician at Vancouver General Hospital and an author of the Canadian study.
“I don’t think this supersedes other risk factors of severity like age and co-morbities and so forth,” added Sekhon, who is also a clinical assistant professor in the Division of Critical Care Medicine and Department of Medicine at the University of British Columbia.
“If one is blood group A, you don’t need to start panicking. And if you’re blood group O, you’re not free to go to the pubs and bars.”

No need to worry

Most humans fall into one of four blood groups: A, B, AB or O. In the United States, the most common blood groups are O and A.
It makes very little difference to most people’s daily lives unless you have to have a blood transfusion. Nor should people worry unduly about the link between blood type and Covid-19, said Dr. Torben Barington, the senior author of the Danish paper and a clinical professor at Odense University Hospital and the University of Southern Denmark.
“We do not know whether this is some kind of protection of group O, or whether it’s some kind of vulnerability in the other blood groups,” he said.
“I think this has scientific interest, and when we find out what the mechanism is, perhaps we’re able to use that proactively in some way in regard to treatment.”
In the Danish study, researchers analyzed data on Danish individuals who were tested between February 27 and July 30, and the distribution of blood types among those people was compared with data from people who had not been tested. They found that blood group wasn’t a risk factor for hospitalization or death from Covid-19.
Both studies were published in the journal Blood Advances.
While there are several theories, researchers don’t yet know what mechanism could explain the link between different blood groups and Covid-19.
Sekhon said it could be explained by people with blood type O having less of a key clotting factor making them less prone to coagulation problems in the blood. Clotting has been a major driver of the severity of Covid-19.
Other possible explanations involve blood group antigens and how they affect the production of infection fighting antibodies. Or it could be linked to genes associated with blood types and their effect on receptors in the immune system.
“It’s a repeated, interesting scientific observation that really warrants further mechanistic work,” he said.

The findings of the two new studies provide “more converging evidence that blood type may play a role in a person’s susceptibility to Covid infection and their chance of having a severe bout of Covid-19,” said Dr. Amesh Adalja, senior scholar at the Johns Hopkins University Center for Health Security in Baltimore, who was not involved in either of the studies.
A separate study, published in The New England Journal of Medicine in June, found genetic data in some Covid-19 patients and healthy people suggesting that those with Type A blood had a higher risk of becoming infected, and those with type O blood were at a lower risk.
That previous genetic study, paired with the two new studies in Blood Advances, are “suggestive that this is a real phenomenon that we’re seeing,” said Adalja, whose work is focused on emerging infectious disease.
“While we’re not quite to the point where this is ironclad, it’s clearly suggestive, and we have not seen anything inconsistent with this. The same pattern has been emerging with O blood type tending to be the one that’s standing out,” Adalja said.
Adalja said that blood types and their susceptibility to various infections have been studied in the medical literature before. For instance, research suggests that people with blood type O appear to be more susceptible to norovirus infection.
As for the novel coronavirus that causes Covid-19, “We need to figure out the mechanism and understand it at the molecular level to be able to say for sure how this is occurring — that this is really the O blood type and not something that kind of tracks with O blood type,” Adalja said.
“We’re starting to see enough now that I think it’s an important research question to answer,” he said. “There’s more science to be done here, but it seems to me that there’s more evidence accumulating for this hypothesis.”