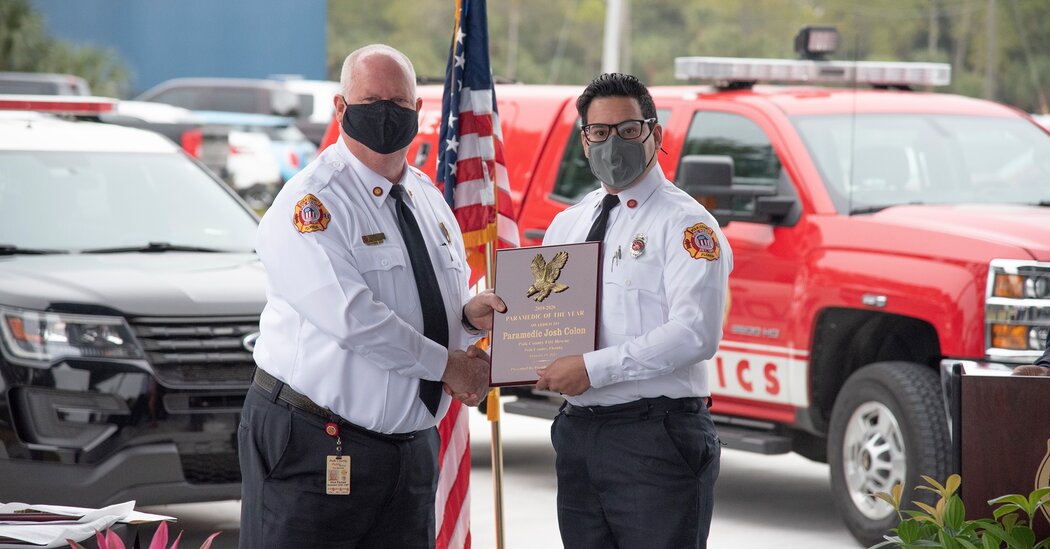 An emergency worker in Florida forged vaccine screening and consent forms for missing vaccines to cover up their theft, the authorities said.

An emergency worker in Florida was arrested this week in connection with the theft of coronavirus vaccine doses, just 12 days after he had been recognized as a county’s “paramedic of the year,” the authorities said on Tuesday.

The paramedic, Joshua Colon, 31, had been responsible for administering doses of the vaccine to firefighters in Polk County, the county’s sheriff, Grady Judd, said during a news conference.

But earlier this month, Mr. Colon could not account for three of the doses of the Moderna vaccine, which the authorities said he initially claimed had been discarded. When he was pressed about the missing doses by a battalion chief, Mr. Colon falsified vaccine screening and consent forms with two false names and the name of a retired firefighter, Sheriff Judd said.

Sheriff Judd said his office, which arrested Mr. Colon on Monday, takes the sacred trust of emergency workers very seriously. Mr. Colon resigned on the day of his arrest, the authorities said.

“We have one question for them,” Sheriff Judd said. “What were you thinking? Did you only have three brain cells?”

David Carmichael, a lawyer for Mr. Colon, did not immediately respond to requests for comment on Tuesday night. But he told The Tampa Bay Times that Mr. Colon had initially tried to bring the theft to the attention of the Polk County Fire Rescue chief, but the chief was out of town. That was when he tried to cover up theft, Mr. Carmichael told the newspaper.

“Mr. Colon deeply regrets his weakness in failing to alert the chain of command to the theft of the vaccine, accepts responsibility for his error in covering up the theft, and in an effort to protect the reputation of his agency, has resigned his position,” Mr. Carmichael said in an email to the newspaper.

Mr. Colon was charged with 16 criminal counts that included forgery, falsifying medical records, official misconduct and creating a fictional personal identification, according to the sheriff’s office.

“Josh Colon was a trusted employee,” Robert Weech, the Polk County Fire Rescue chief, said at the news conference. “I consider this to be out of character for him. He made some severe mistakes.”

Officials could not say whether Mr. Colon had been under pressure from his supervisor to cover up the theft.

“It does not appear to me that he benefited at all,” Chief Weech said.

The chief noted that Mr. Colon had been honored on Jan. 13 by a group of civic organizations as the “paramedic of the year” for 2019 and 2020, and for his response to a serious multivehicle crash on a local highway. Polk County is in Central Florida between Tampa and Orlando.

On its Facebook page, Polk County Fire Rescue posted photos at the time of a plaque presentation for the honor.

“It’s a matter of public trust,” Chief Weech said on Tuesday. “We take that seriously.”

[ad_1] The city of Moscow opening 70 vaccination facilities where thousands of doctors, teachers …