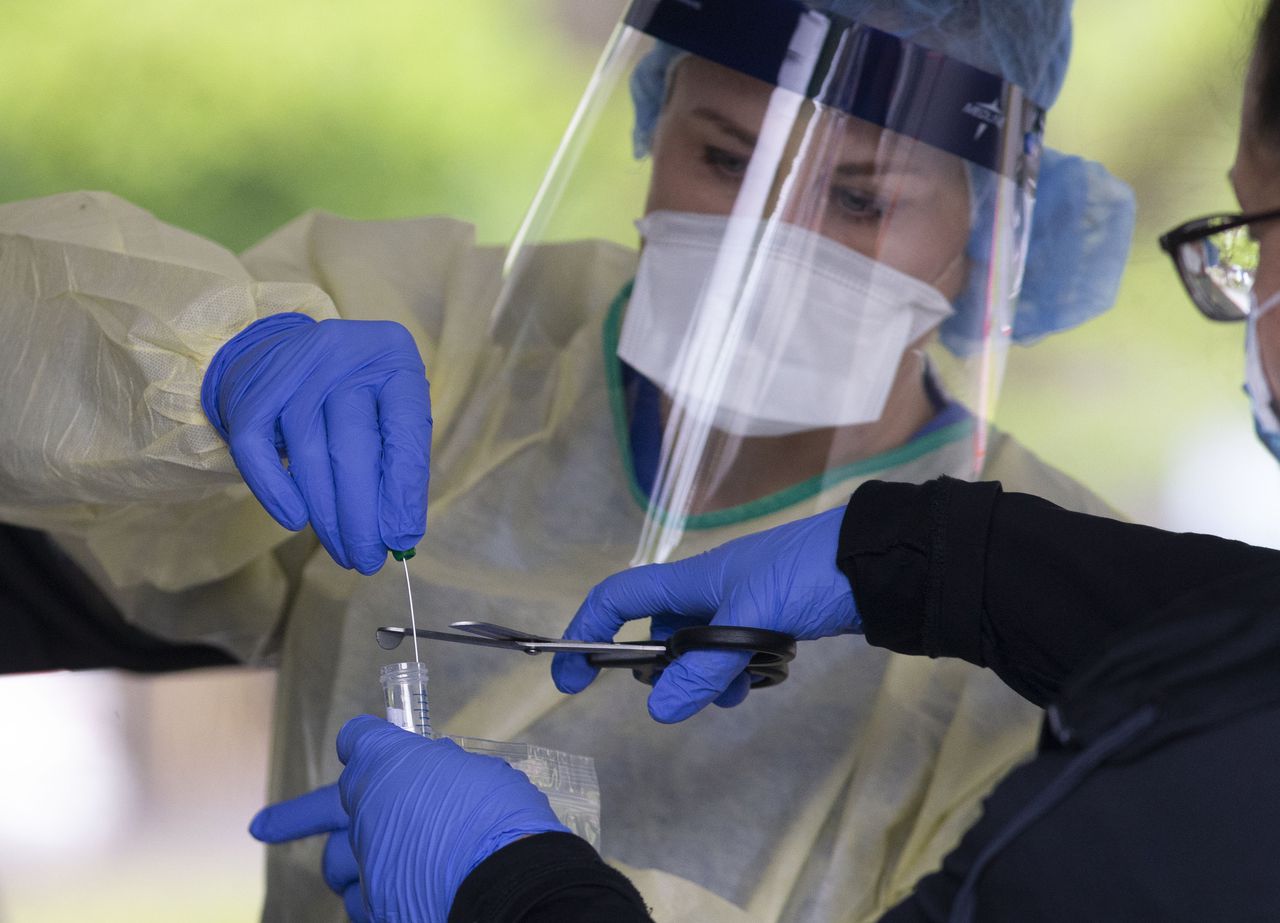 After days of brutal criticism over state data showing a disappointing number of Oregonians tested for the coronavirus, public health officials held a news conference Nov. 20 to announce Oregon wasn’t performing as poorly as it appeared.

Although data from two prominent COVID-19 test tracking websites showed Oregon ranked 49th or 50th nationally in its rate of testing, officials said Oregon’s performance was instead “middle of the pack.”

To support that assessment, officials decided nine months into the pandemic to dramatically alter their reporting technique to highlight an entirely different set of testing statistics.

Instead of reporting the number of individual Oregonians tested, public health officials would now announce the number of tests conducted. That meant rather than saying 52,000 individual Oregonians had been tested in the second week of November, public health officials could now say a record 113,000 tests had been conducted, representing a vast increase from previous weeks and making Oregon look far better in national comparisons.

“You have to do what is the right thing in terms of the right way to report the data,” said Patrick Allen, director of the Oregon Health Authority, explaining that the previous method undercounted people who sought multiple tests.

State officials were aware of some of these pitfalls before they announced the change in how test results are reported. Dr. Melissa Sutton, one of the state’s top experts on coronavirus testing, told The Oregonian/OregonLive in an interview a week before the switch that the state’s system for counting tests was so unreliable she wouldn’t release those numbers for public viewing.

Specifically, Sutton said the tabulations offered “a really imperfect estimate” of the number of tests conducted, were “problematic” and amounted to “very messy data.”

Indeed, a month later, discrepancies in the numbers of tests reported are coming into sharper focus. As of Friday, the state reported more than 91,000 cases of Oregonians infected with the coronavirus since the start of the pandemic. Yet the state reported receiving about 129,000 test results for people who tested positive. That’s a 41% difference.

Sutton said one reason for the discrepancy is that some people might have been tested more than once. But she also acknowledged that some of the positive test results, reported to the state through an “electronic laboratory report” or “ELR,” might be duplicates, meaning the state may be counting the same test multiple times.

“It is important to remember that ELR volume is an estimate of testing volume,” Sutton wrote in an email Wednesday.

Oregon’s switch has upended at least one longstanding benchmark that officials say is an important indicator for tracking improvements.

As a result of the change, Oregon’s closely watched test positivity rate plummeted from 14% to 7% in November. State officials have said positivity rates are one of a few requirements that must be met before reopening K-12 schools. They initially set the standard at 5% statewide and for individual counties – and for all of September and October, the statewide positivity rate would have been below 5% had the state been using its new method for calculating the rate. But because the state was using its old method, the rate hovered just above 5% or 6% — too high to clear that first of a few hurdles in reopening classrooms.

That has led some parents to lose all confidence in the benchmarks the state has put forth.

“Their credibility is shot,” said Shalyse Olson, a mother of four who started the Facebook group “Open Oregon Schools.” “It’s baffling. They’re just coming up with this stuff.”

There are legitimate reasons for the change Oregon Health Authority officials have made.

The state’s old way of reporting testing data undercounted the true number of Oregonians tested – typically by counting a person only once even if that person was tested multiple times in a 90-day period. The state originally adopted that methodology to ensure people who tested positive weren’t double counted if they were retested and viral remnants of the same infections were still detected.

Another legitimate reason for changing the calculation is that most states report testing numbers the way Oregon now does. Reporting the number of tests conducted each week — instead of the number of individual people tested — allows for more uniform comparisons.

Based on data compiled by The New York Times, Oregon is one of 42 states that now report numbers the same way.

It’s common for states to have trouble accurately counting the number of tests performed, said Alexis Madrigal, co-founder of the COVID Tracking Project, which compiles national and state-level data.

But Madrigal argues it’s better to have more data – even if it’s troubled data – than less. Oregonshould continue to keep publishing the number of individual Oregonians tested each week, he said.

“The best thing would be if Oregon continues to post both numbers,” Madrigal said. “That would show they’re not doing this to make themselves look better, they’re doing this to increase transparency.”

State officials have decided to stop reporting individual testing numbers and scrubbed their website of the historic weekly counts.

The Oregon Health Authority declined repeated requests from The Oregonian/OregonLive to interview Sutton. She, however, answered written questions over email.

Sutton said the Oregon Health Authority chose to adopt the new reporting method, even with its flaws, because it’s indisputable that the volume of tests is on the rise.

Criticism of Oregon’s testing performance has simmered down since state officials announced their change.

Sen. Michael Dembrow, D-Portland, was one of 32 elected officials who signed a Nov. 16 letter to the governor urging more testing after The Oregonian/OregonLive published a front-page story revealing that state data showed hardly any gains comparing the number of people tested weekly in July to early November.

Dembrow also was one of the lawmakers who was pleased to see the Oregon Health Authority’s explanation at the news conference — that comparing Oregon’s historical testing numbers to other states wasn’t an apples-to-apples comparison.

But after learning about the agency’s unwillingness to set aside time for Sutton or another official to be interviewed, he said he hoped officials would have a more open conversation.

“I feel like we should be talking about this in a neutral, not so defensive way,” Dembrow said.

Oregon’s testing numbers will now be amplified more than ever by repeated testing of a select group of people. The state isn’t saying precisely who all of these people are or how often they’re getting tested, but in some cases it’s apparent.

Athletes in various college sports are tested at a far higher rate than the general population, for example. The more than 285 football and basketball players at the Oregon State University and University of Oregon, which are part of the Pac-12 Conference, are required to get tested at least six times a week.

That adds up to about 1,700 tests a week, or roughly 1% of the total tests now being reported by the state.

Under new government rules, about 29,000 workers at nursing homes and other long-term care facilities also must get tested at least once a month and as frequently as twice a week, depending on the severity of coronavirus spread at the county level. The requirement went into effect Nov. 1.

That equals 25,000 to 45,000 tests a week, according to a rough analysis of worker estimates and county-level testing requirements by The Oregonian/OregonLive. That’s 15% to 26% of the tests the state said it conducted in the week ending Dec. 5.

Frequent, repeat testing of specific groups will mean that the overall testing numbers released each week “will not be reflective of testing in the community,” said Rep. Christine Drazan, R-Canby, the minority leader of the state’s House of Representatives.

Drazan said aside from the questions about how the state reports testing numbers, she continues to hear stories from some constituents about how they weren’t able to get a coronavirus test.

Even though the Oregon Health Authority reported a 142% jump in tests conducted from October to December under its new way of reporting numbers, that hasn’t alleviated the need for more tests.

But some residents are still finding it challenging to get a test under the state’s stringent criteria. Some Portland area hospitals and health systems say testing capacity is so strained by overwhelming demand that individuals without symptoms but with known exposures to the virus aren’t getting tests.

By 9:30 a.m., the site had reached its testing capacity and was turning new arrivals away.

St. Helens resident Kathy Innocenti said she recently was denied a test by her doctor.Innocenti wants to get tested to minimize as much risk as possible before seeing her dad, 86, who lives in Salem and has been diagnosed with cancer.

She has seen images of the long lines of cars at Dodger Stadium in southern California, where anyone who wants a test can get one.

“It’s very discouraging to see tests being done hand over fist in one part of the country,” she said, “while I can’t hug my dad for lack of a test.”