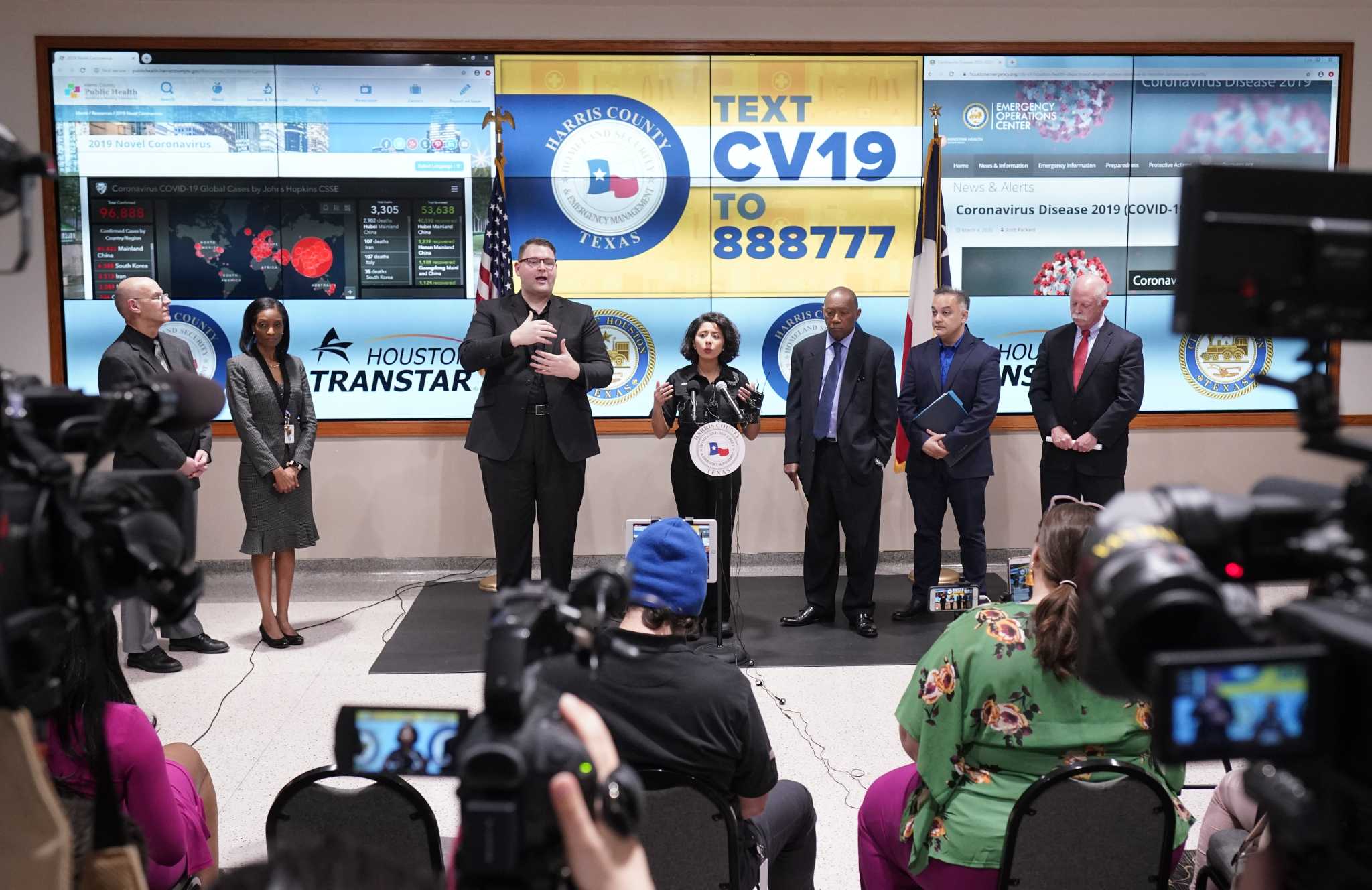 The new cases involved four people in their 60s who were exposed to the virus during a trip to Egypt last month also taken by a 70-year-old Fort Bend man whose case was confirmed Wednesday by a Houston laboratory. The five people contracted the virus independently of each other and developed respiratory symptoms after returning to Texas.

“We expect to see more cases in coming days as we receive test results back,” said Harris County Judge Lina Hidalgo. “We’re very much in the containment phase.”

At a news conference Thursday, Mayor Sylvester Turner urged people to minimize foreign travel, “the common denominator” in the cases. He said that “this would be an excellent time for people to engage in staycations, especially with spring break coming up.”

Hidalgo stressed that there is no evidence here yet of any community spread of the pneumonia-like disease, known as COVID-19. The virus that causes it, which originated in China, now has infected nearly 100,000 people and killed more than 3,300 people in at least 81 countries, including the U.S., where the number of cases has spiked significantly this week.

Four of the Houston-area patients remain hospitalized in stable condition and the fifth is self-quarantined at home with mild symptoms, according to health officials. The officials would not disclose when they developed symptoms — the period during which the disease becomes contagious — but said it was after they returned to Houston from Egypt in late February.

The new cases include a Rice employee, a woman, whose subsequent contact with 14 university faculty, staff and doctoral students currently has them in self-quarantine away from campus. The other three new cases are men whose local, post-symptom contacts are in the process of being traced by local health officials.

The four individuals include three living in unincorporated areas of Harris County and one in the city of Houston.

“We are doing everything we can to find who else was exposed to these individuals,” said Dr. Umair Shah, executive director of Harris County Public Health. “We are aware and have been investigating individuals who went on the trip to Egypt.

The five people who contracted the coronavirus all took the trip as personal travel. Egypt currently is not on the Center for Disease Control and Prevention’s restricted travel list.

Though he advised against foreign travel, Turner encouraged residents to go about their daily business, “not become paralyzed by fear.” Earlier in the day, in a show of support for Asiatown businesses that have reported declining sales and fewer patrons because of coronavirus concerns, Turner gathered a team of city leaders for a lunch meeting at Ocean Palace.

At the restaurant, Turner took out his personal bottle of sanitizer and shared it with colleagues before they dug into dim sum.

Editor’s note: This guide is intended to ensure our readers are provided the most useful information concerning COVID-19

What are the symptoms of coronavirus?

How do I avoid contracting the virus?

The CDC says that the risk of getting coronavirus is low in the U.S. People should:

Clean and disinfect objects and surfaces with household cleaning supplies

Wear a face mask only if they show symptoms of coronavirus

If I think I actually have contracted coronavirus where do I go?

He said not to show up in an emergency department, a hospital or a clinic. Contact the facility ahead of time so they know you may be sick.

Inform them of your symptoms and any recent travel to affected countries or exposure to people who have traveled to places on the CDC’s restricted travel list.

Medical experts recommend calling your doctor only if you have traveled to an area with coronavirus outbreak or been in contact with someone who recently had traveled there within the last two weeks.

How to reach the Fort Bend County where the first nonimported case in Texas was reported on Wednesday?

In the U.S., there have been more than 200 COVID-19 cases, up from 15 last week, in 19 states. Fourteen deaths have been linked to the virus, all but one in the Seattle area, an ominous trend according to one Houston expert.

“Houston has a lot in common with Seattle,” Peter Hotez, founding dean of the Baylor College of Medicine National School of Tropical Medicine, said in a telephone inteview from Washington, where he testified on the threat Thursday before a House committee. “We’re an international hub, with a diverse population, and our economies depend on that. We should expect more cases here.”

Dr. David Persse, the health authority for the city of Houston, asked health professionals to refrain from requesting testing without a legitimate reason to believe the patient has contracted the disease. He noted that local authorities have a limited ability to process tests.

Houston’s public health lab gained a single test kit to analyze samples on Wednesday, allowing the city to conduct its own tests instead of sending samples to the CDC in Atlanta. The kit has the capacity to test 700 specimens suspected of carrying the disease, enough for about 250 to 400 patients.

Local health departments expect to receive more resources to test the coronavirus and counter its spread thanks to an $8.3 billion emergency aid measure approved by the Senate Thursday and expected to be signed by President Donald Trump. Most of the bipartisan package will go to such agencies.

Gov. Greg Abbott said Thursday that six labs in the state — Austin, Dallas, El Paso, Lubbock and Fort Worth are the others — are now able to test for the virus. The state’s lab response network will be fully online by the end of the month.

Persse expressed optimism for Houston’s ability to respond to any coronavirus outbreak here, noting its “advantage of having gone through similar drills with hurricanes and flooding that have stressed our health care system.”

Though the disease can be fatal, health officials emphasize that more than 80 percent of people who have contracted the COVID-19 virus worldwide have experienced only mild to moderate symptoms and fully recover. The officials urged residents to take sensible measures to protect against the spread of COVID-19: washing hands, avoiding touching your face, avoiding close contact with people who are sick, covering your mouth when you sneeze or ocugh, and disinfecting surfaces often.