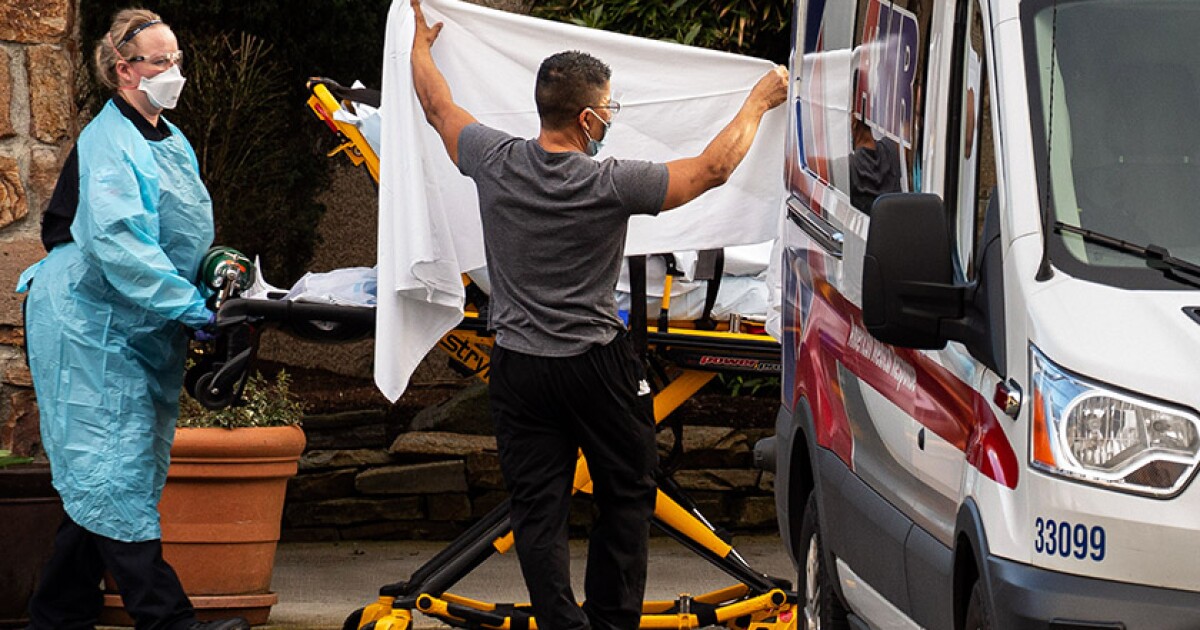 Staff members at the Seattle-area nursing home overrun by COVID-19 spread the coronavirus to other facilities where they worked, an investigation led by the U.S. Centers for Disease Control and Prevention has found.

The report published Wednesday said that as of March 9, the CDC confirmed 129 COVID-19 cases among people linked to Life Care Center of Kirkland. These comprise 81 residents, 34 staff members and 14 visitors.

Separately Wednesday, public health officials reported five more deaths associated with the facility, bringing the total number who have died to 35 — more than half of Washington state‘s known total of 66.

Dr. Dallas Weaver, 79, and his wife, Janet Weaver, 75, of Huntington Beach, walk on the Huntington pier.

Roberta Tabor, 66, of Hermosa Beach, has her ID checked by store director Dennis Sullivan at Gelson’s Market in Manhattan Beach on Wednesday. The store is doing a “seniors shopping hour” where seniors 65+ can go grocery shopping before anybody else.

Seniors shop at Gelson’s Market in Manhattan Beach on Wednesday. The store is doing a “seniors shopping hour” where seniors can go grocery shopping before the store opens to the general public.

Dr. Mark V. Morocco oversees testing at UCLA Medical Center where people can drive up and get tested if they have the symptoms. Morocco listens to a female patient’s lungs through the car window.

A nurse takes the vital signs of a woman in a medical tent outside the hospital on Catalina.

An employee of the Trader Joe’s store in Monrovia tells customers waiting in line that it would open doors to everyone at 9 a.m., not just seniors, who arrived believing doors would open earlier to older residents, as some of the people were told by employees and it was reported. Some grocery outlets were offering special morning hours of shopping to accommodate older residents.

Kevin Ezeh, protected with face mask and gloves, addresses the Los Angeles City Council meeting standing under a tent erected outside City Hall. A television livestreamed video of the meeting and the public offered comments remotely.

Orange County Undersheriff Bob Peterson listens during a board of supervisors discussion on combating the coronavirus in Santa Ana.

A large tent is installed for public attendance at Tuesday’s Los Angeles City Council meeting. The public was not allowed in the council chamber.

Shoppers queue up ahead of the Los Feliz Costco opening for business on Tuesday, March 17, 2020 in Los Angeles.

Volunteer Rachel Figueroa, serves a free lunch to go to Destiny Mendez, with her mother, Estefany, at the Dream Center in Los Angeles. LAUSD students can get free breakfast, lunch and dinner at the Dream Center, Monday through Friday.

Emma Bradley, left, and her husband, Samuel Bradley, of Palmdale are walking up the ramp to catch the Metrolink in Union Sation in Los Angeles.

Normally bustling Grand Central Market in downtown L.A. is open only for take out.

L.A. has banned restaurants from offering seating at places such as Grand Central Market.

A line at the Martin B. Retting gun store in Culver City on Sunday extends out the door and around the corner.

A guest wears a mask in front of the Sleeping Beauty Castle at Disneyland on Thursday.

Students hug as they are let out of school at Hamilton High School in Los Angeles, Calif., on March 13, 2020. The school has 2,623 students who live in 94 different zip codes, some of whom travel upwards of 30 miles to school on 24 different school bus routes. 221 school staff live in 88 zip codes. Los Angeles Unified School District Superintendent Austin Beutner announced that schools will be closed due to the coronavirus. (Gary Coronado / Los Angeles Times)

Blake Anderson, left, a freshman, walks with his father Oree Anderson, as school is let out at Hamilton High School in Los Angeles. LAUSD announced that schools will be closed due to the Coronavirus.

Students leave John C. Fremont High School in Los Angeles at the end of the school day on Friday, Mar. 13, 2020. LAUSD announced it will shut down beginning Monday.

A crew member stands on the stern of a cruise ship docked at the Port of Los Angeles.

Two children look at movie posters in the lobby of the Arclight theater Thursday in Manhattan Beach.

People shop at the Del Amo Fashion Center in Torrance.

Cab drivers wait for riders at the Long Beach Airport.

A woman claims her luggage at he Long Beach Airport.

The report urged other such facilities nationally to immediately work to prevent coronavirus outbreaks.

Of the deaths linked to the nursing home, one was a visitor and the rest were patients.

The advanced age of many long-term care facility residents, their underlying health conditions and their proximity to one another put them at risk for sickness and death, the report said.

Life Care residents infected by the virus ranged from 54 to 100 years old, with a median age of 81.

“Substantial morbidity and mortality might be averted if all long-term care facilities take steps now to prevent exposure of their residents to COVID-19,” the report said.

A spokesman for the nursing home said Wednesday that managers welcomed the CDC report, because it could alert other facilities and lead to new guidelines.

“For us this is all positive, even if there are things they found that we could have done better,” said Timothy Killian, a crisis communications specialist, on behalf of Life Care.

He said that two or three days after the outbreak was discovered, staff members were banned from working at other facilities.

“As soon as we had an idea that this was something that shouldn’t be done, we stopped,” he said.

Dr. Michael Wasserman, president of the California Assn. of Long Term Care Medicine, said that low wages in nursing homes and assisted-living centers force many staffers to work in multiple facilities. Certified nursing assistants often make no more than minimum wage, and nurses typically receive less than they do in hospitals.

In addition, a sense of duty and financial stress may tempt employees to come to work sick, endangering elderly residents who have underlying health conditions.

“This is only the beginning, and there are going to be more Kirklands,” said Wasserman, a geriatrician and former chief executive officer of Rockport Healthcare Services, a California chain of more than 70 nursing homes.

“You’re taking a lethal virus, and if it gets into the nursing-home setting, where the staff are not trained to address it, this is what you get. The majority of nursing homes in this country are not prepared.”

The Kirkland nursing home is a branch of Life Care Centers of America, a company with more than 200 skilled nursing, rehabilitation, Alzheimer’s and senior living campuses in 28 states. With more than $3 billion in annual revenue, the privately held company based in Cleveland, Tenn., has about 40,000 employees.

On March 12, the company posted a statement on its website that said the safety of its residents was a top priority and that each employee’s temperature was being taken upon arrival at work.

“If they have a fever over 100.4, we send them home and ask they visit their personal physician,” the statement said. It said the policy met guidelines of the CDC and the Centers for Medicare & Medicaid Services.

On Wednesday, an updated policy on the website said that all visitors, nonessential healthcare personnel and vendors had been restricted from entering the chain’s facilities.

The CDC conducted the investigation with the Seattle & King County Public Health agency and EvergreenHealth, the medical center that treated most of the patients hospitalized from the nursing home.

According to the report, an outbreak of respiratory illnesses began in mid-February. But tests of several residents were negative.

COVID-19 was discovered Feb. 28 in a 73-year-old with underlying health conditions. She had been hospitalized four days prior due to worsening respiratory symptoms.

Once the outbreak was discovered, investigators emailed about 100 long-term care facilities in King County to check for other clusters of the disease and visited nursing homes with suspected outbreaks to conduct emergency tests for the virus, the report said.

“As of March 9, at least eight other King County skilled nursing and assisted living facilities had reported one or more confirmed COVID-19 cases,” the report said.

Several conditions probably made these facilities vulnerable, the investigation found.

Staff members worked in more than one facility. Staffers worked while symptomatic. Workers weren’t familiar with standard precautions concerning droplets from patients, surface contacts and eye protection. Facilities had inadequate supplies of personal protective equipment and other items such as alcohol-based hand sanitizer. And supplies of test kits were limited.

“The findings in this report suggest that once COVID-19 has been introduced into a long-term care facility, it has the potential to result in high attack rates among residents, staff members and visitors,” the report said.

The report said that since the outbreak was discovered, authorities in Washington state announced new requirements for long-term care facilities, including health screening for staff members and visitors, whose presence has been limited.