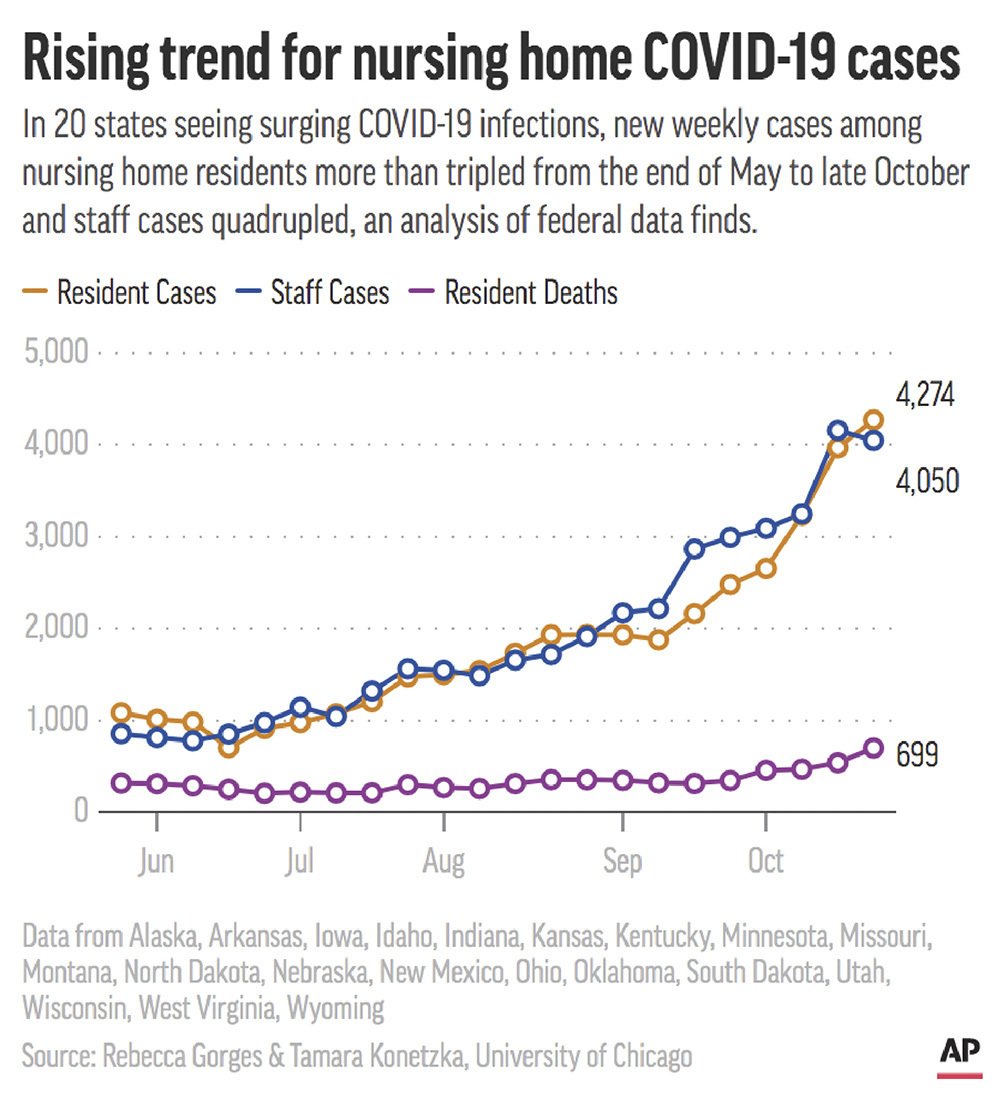 Weekly COVID-19 infections in nursing homes in 20 states have been rising since May. (AP Graphic)

Weekly COVID-19 infections in nursing homes in 20 states have been rising since May. (AP Graphic)

WASHINGTON (AP) — Despite Trump administration efforts to erect a protective shield around nursing homes, coronavirus cases are surging within facilities in states hard hit by the latest onslaught of COVID-19.

An analysis of federal data from 20 states for The Associated Press finds that new weekly cases among residents rose nearly four-fold from the end of May to late October, from 1,083 to 4,274. Resident deaths more than doubled, from 318 a week to 699, according to the study by University of Chicago health researchers Rebecca Gorges and Tamara Konetzka.

Equally concerning, weekly cases among nursing home staff in surge states more than quadrupled, from 855 the week ending May 31, to 4,050 the week ending Oct. 25. That rings alarms because infected staffers not yet showing symptoms are seen as the most likely way the virus gets into facilities. When those unwitting staffers test positive, they are sidelined from caring for residents, raising pressures on remaining staff.

The administration has allocated $5 billion to nursing homes, shipped nearly 14,000 fast-test machines with a goal of supplying every facility and tried to shore up stocks of protective equipment. But the data call into question the broader White House game plan, one that pushes states to reopen while maintaining that vulnerable people can be cocooned, even if the virus rebounds around them.

The nation is setting records for coronavirus cases heading into cold weather season when many experts expect the virus will be harder to contain. The seven-day rolling average for daily new cases stood at nearly 104,000 on Saturday, according to data from Johns Hopkins University.

Nursing homes and other long-term care facilities account for about 1% of the U.S. population, but represent 40% of COVID-19 deaths, according to the COVID Tracking Project.

In Fort Dodge, a manufacturing and transportation center in north-central Iowa, Julie Thorson said she knew she was in for a bad week when several employees at the Friendship Haven nursing home tested positive last Monday. As president of the senior living community, Thorson contacted the county health department. “They were basically not surprised because they’re seeing it all over the county,” she said.

Residents also started testing positive. The facility had 11 new cases among residents, as of Friday.

Responding to the study findings, the federal Centers for Medicare and Medicaid Services issued a statement saying that “the bottom line is that the COVID-19 pandemic’s effect on nursing homes is complex and multifactorial.”

The agency noted different ways the administration has worked to help nursing homes and said its focus now was on ensuring that residents and staff would “immediately” have access to a vaccine once approved. But it also added that facilities “bear the primary responsibility for keeping their residents safe.”

But Konetzka said her research has shown that nursing home quality has no significant effect on cases and deaths once community spread is factored in. “It’s not like the high-quality facilities have figured out how to do things better,” she said. Other academic experts have reached similar conclusions.

Highly rated by Medicare, St. Paul Elder Services in Kaukauna, Wisconsin, has had 72 COVID-19 cases among residents and 74 among staff, according to its Facebook page. The first case among residents was Aug. 19, and 15 have died, said the facility’s president, Sondra Norder.

“The outcomes are really not much different here than they were in New York back earlier in the pandemic,” Norder said. “It’s been called the perfect killing machine of the elderly, especially those who live in congregate settings.” Kaukauna is a small city about 100 miles north of Milwaukee.

The study, based on data reported by nursing homes to the government, also raised other concerns:

— For the week ending Oct. 25, about 1 in 6 nursing homes in surge states did not report having tested staff the prior week. Government requirements call for staff testing at least weekly in areas where the virus is spreading.

— During the same period, nearly 1 in 5 nursing homes reported shortages of basic protective supplies such as masks and gowns.

Most of the states in the study are in the middle and northern tiers of the country.

The Commons, a senior living community in Enid, Oklahoma, that includes a nursing home, is in a coronavirus hotspot. The oil and gas hub has a positive rate approaching 18%. A local mask mandate has twice been shot down, said Steven Walkingstick, CEO of The Commons.

“From my standpoint, a mandate unfortunately is needed,” said Walkingstick. “I don’t want the government involved, but evidence has shown we are not going to do this voluntarily.”

Walkingstick said he believes the U.S. has gotten better at saving the lives of COVID-19 patients, but not at keeping the virus out of nursing homes.

Thorson, head of the Fort Dodge facility, said it takes a lot of effort to try to keep the virus out, and it’s demoralizing to see it break through.

“Don’t forget about us, because we are still here, doing the best we can in rural areas,” she said.