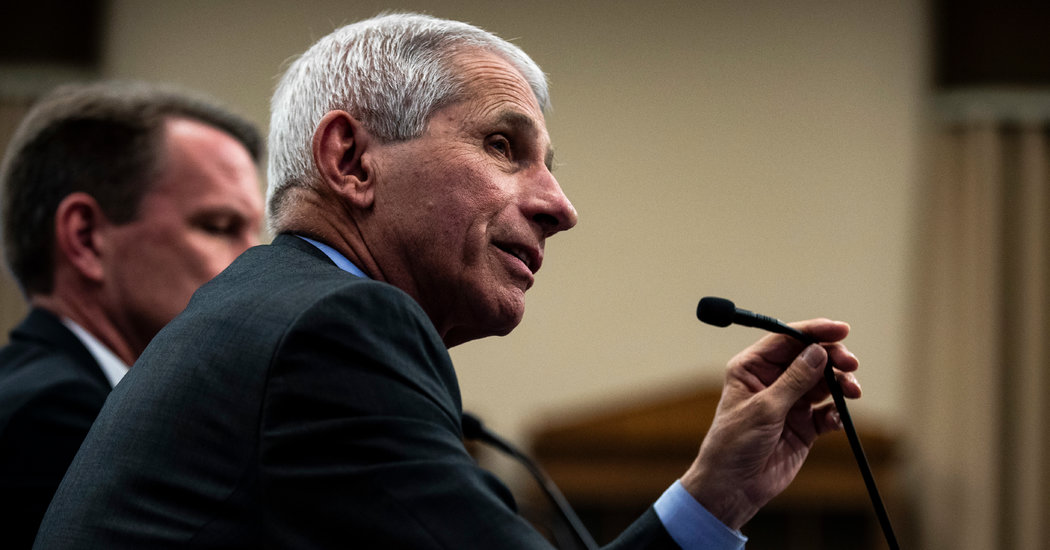 Dr. Anthony Fauci, the nation’s leading expert on infectious diseases, is widely respected for his ability to explain science without talking down to his audience — and lately, for managing to correct the president’s pronouncements without saying he is wrong.

President Trump said that drug companies would make a coronavirus vaccine ready “soon.” Dr. Fauci has repeatedly stepped up after the president to the lectern during televised briefings or at White House round tables to amend that timetable, giving a more accurate estimate of at least a year or 18 months.

Mr. Trump said a “cure” might be possible. Dr. Fauci explained that antiviral drugs were being studied to see if they might make the illness less severe. The president also said the disease would go away in the spring. Dr. Fauci said maybe so, but because it was caused by a new virus, there was no way to tell.

Experts like Dr. Fauci should be the ones who speak to the public during epidemics, said Representative Donna E. Shalala of Florida, who was his boss during the Obama administration, when she led the Department of Health and Human Services.

“I think Tony is playing the same exact role that he has in the past — to make sure the science is accurate and clear,” Ms. Shalala said. “During a health emergency, it’s the scientists and physicians that are the credible people to the American public, not politicians.”

On Sunday, Dr. Fauci appeared on at least two television news shows, warning that as the virus spread — there were more than 450 cases in at least 33 states — some stricter measures to isolate the infected might be considered. He also offered advice for older adults and those with underlying health conditions who are most at risk, saying they should avoid cruises, flights and large gatherings of people.

At a recent Congressional subcommittee hearing, one representative asked Dr. Fauci if he had a twin, because he seemed to be everywhere lately. Another offered medical advice: lemon, honey and bourbon for his voice, which has been hoarse for weeks from endless rounds of talking to lawmakers, scientists, health officials and reporters.

If Dr. Fauci has become the explainer-in-chief of the coronavirus epidemic, it is in part because other government scientists have left a vacuum, avoiding the news media spotlight or being reined in by the Trump administration and accused of exaggerating the threat from the virus. When reporters call Dr. Fauci, he calls them back.

Dr. Robert Redfield, director of the Centers for Disease Control and Prevention, is famous for being unknown: He has given few interviews or public talks outside those required by administration news conferences. Dr. Nancy Messonnier, director of the C.D.C.’s National Center for Immunization and Respiratory Diseases, who warned on Feb. 25 that the coronavirus was likely to spread in the United States, and that “this could be bad,” came under fire from the administration and has toned down her advisories.

“Nancy Messonnier told it like it is,” said Dr. Thomas Frieden, the former director of the C.D.C. “And she was 100 percent right, and they silenced the messenger.”

The C.D.C. has made few of its other scientists available for interviews about the coronavirus. And it is now facing sharp criticism for long delays in providing states with kits to test for the virus, and for setting such tight limits on the tests performed at its headquarters in Atlanta that some diagnoses were delayed or missed, possibly leaving infected people to spread the virus to others.

Get an informed guide to the global outbreak with our daily coronavirus
newsletter.

Dr. Fauci, 79, does not seem to be in the cross hairs. Although he was recently told he must clear his many TV, radio and print interviews through the White House, he has said that he has not been muzzled.

“You don’t want to go to war with a president,” Dr. Fauci told Politico. But he thinks the public needs solid, understandable medical information, especially during crises. He makes a point of not trying to “razzle-dazzle” audiences with his knowledge, he told an interviewer in 2015, adding that his education at a Jesuit high school and college taught him intellectual rigor and the value of public service. As director of the National Institute of Allergy and Infectious Diseases since 1984, Dr. Fauci has lasted through six presidents, and has declined multiple requests to lead his agency’s parent organization, the National Institutes of Health. He has led federal efforts to combat diseases caused by emerging viruses, including H.I.V., SARS, the 2009 swine pandemic, MERS, Ebola and now the new coronavirus.

He was an architect of the President’s Emergency Plan for AIDS Relief, started in 2003 by President George W. Bush, to fight H.I.V. globally.

In 2001, after anthrax was mailed to Senator Tom Daschle of South Dakota, the Bush administration tried initially to minimize the threat, but Dr. Fauci was characteristically blunt.

“This is material that is quite formidable, that is infecting people with inhalation anthrax, infecting them in the absence of direct contact,” he said. “You can call it whatever you want to call it with regard to grade and size or weaponized or not weaponized. The fact is, it is acting like a highly efficient bioterrorist agent.”

Previous disease outbreaks have kept him on the lookout for new pathogens, and in January, reports of unexplained pneumonia cases in Wuhan, China, set off alarms in his head.

“Even before we knew it was a coronavirus, I said it certainly sounds like a coronavirus-SARS type thing,” he said. “As soon as it was identified, I called a meeting of top-level people and said, ‘Let’s start working on a vaccine right now.’”

He is among the most highly paid federal employees, earning about $400,000 a year, more than the vice president or the chief justice of the Supreme Court. He oversees a 2020 budget of $4.75 billion, which is $769 million less than last year’s after being cut by the Trump administration.

Unflappable though Dr. Fauci may seem, the new coronavirus worries him, especially its spread in the Seattle area and the toll it is taking in a nursing home there. He said he thought it was still possible to stop the disease, but health authorities would have to know where it was to do that, and he said the lack of testing capacity was a huge obstacle.

Test kits sent by the C.D.C. to states were flawed, and it has taken weeks to begin replacing them. And strict regulations from the Food and Drug Administration hampered outside labs’ efforts to begin to do their own tests.

But Dr. Fauci declined to join the chorus of blame against the C.D.C.

“It’s so easy to play Monday morning quarterback,” he said. “Every element of the federal government was working full-speed to try to get this out and get things going.”

“What I really want to concentrate on is the idea of getting enough tests out there to get an evidence-based foundation of where we are in this country,” he said. “Seattle is of concern. We need to know the extent of the community spread.”

At times in the past, Dr. Frieden said, Dr. Fauci may have over-promised a bit in his enthusiasm for projects of his that have yet to pan out — an H.I.V. vaccine, and a universal flu vaccine that would provide long-lasting immunity to multiple strains so that people would not need another shot every year.

“It’s the role you have to play to get money from the Hill, and the role of a researcher to be eternally optimistic about a cure being around the corner,” Dr. Frieden said. “He’s very effective at asking for money from Congress.”

He is also a fair-minded colleague, Dr. Frieden added. During West Africa’s Ebola epidemic in 2014, after two nurses treating a patient who had traveled to the United States became infected, the C.D.C. was harshly criticized for not having helped hospitals to prepare better. Dr. Fauci did not pile on.

“Not everything we did was perfect,” said Dr. Frieden, who then headed the C.D.C. “There are many people in similar roles as Tony who might have taken advantage of that for the interest of their institution, and Tony was always honorable.”

“If we did something wrong he was frank about that,” he continued. “When we were getting attacked unfairly, he defended us. That’s very unusual behavior in the bureaucratic situation you see in Washington sometimes. I think that’s why Tony is so respected.”

During the early years of the AIDS epidemic, the U.S. government and its health agencies were a frequent target of criticism and protests, blamed for inaction on potential treatments and inadequate funding for research and medical care.

When AIDS activists demonstrated outside his institute in 1988, demanding a chance to try experimental drugs, Dr. Fauci surprised the leaders by inviting them into his office. He wound up working with them to develop new ways to expand access without compromising the clinical trials that were urgently needed to determine which drugs worked — an approach that was later applied to research in other diseases as well.

“There are a lot of world class scientists, but Tony has a special set of skills,” Ms. Shalala said. “An ability to communicate, high integrity and an understanding of politics — and to know to stay out of politics in order to protect scientists.”

Dr. Fauci acknowledged that his age puts him in one of the groups at highest risk for becoming severely ill from a coronavirus infection. But it has not slowed him down. He sleeps only about five hours a night, works most of his waking hours and jumps on the Metro to get around the Washington, D.C., area, from his office to the Capitol and the White House. Most days, he runs or power walks 3.5 miles.