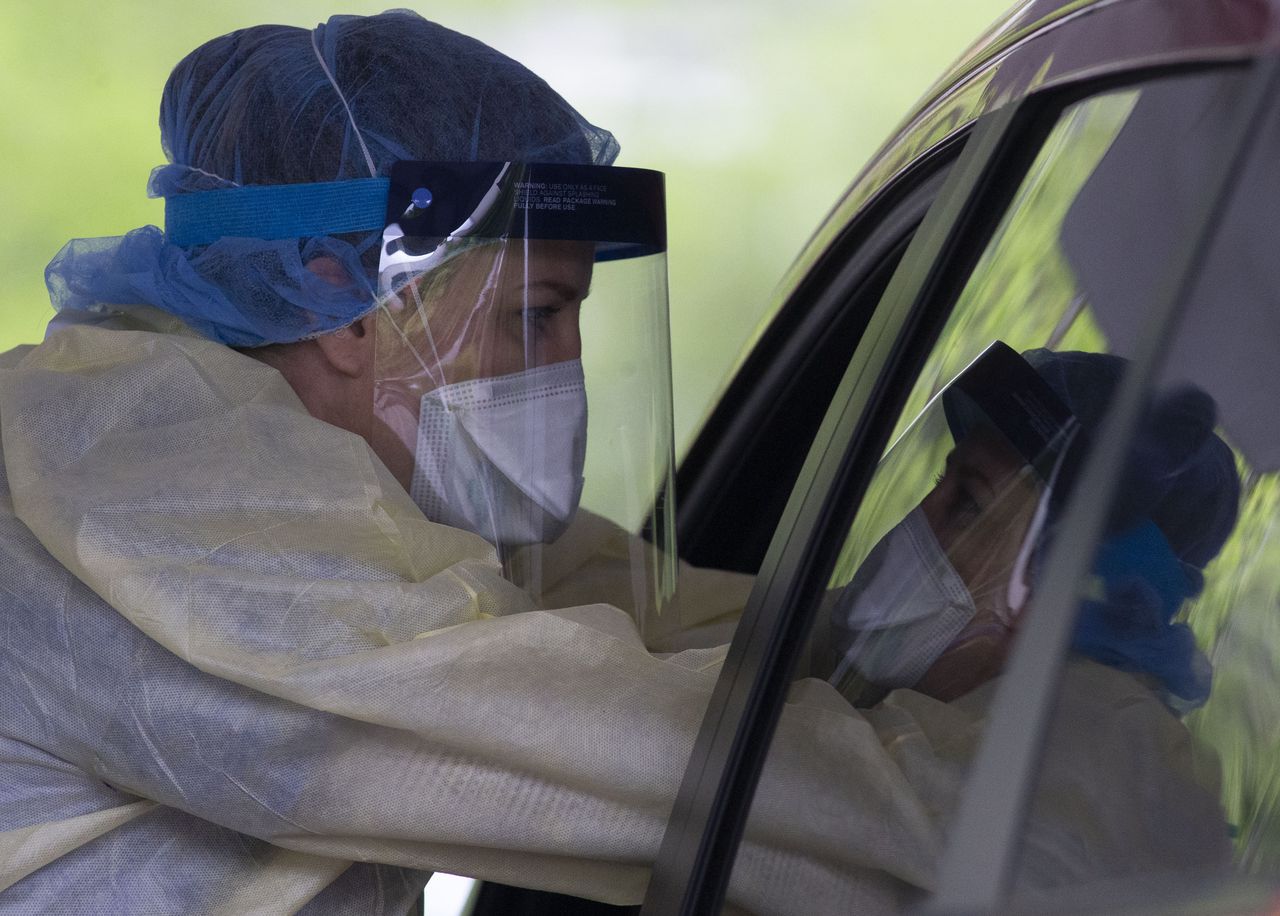 Coronavirus infections have spiked since Oregon began reopening its economy on May 15, and new state modeling of infection rates and hospitalizations released Friday predicts the pandemic could spread dramatically by the end of July.

“If transmission remains at current levels, we expect continued exponential growth in infections,” said the report from the Oregon Health Authority.

The forecast predicts that the state could see anywhere from 1,100 to 7,300 new cases per day by the end of July, depending on where infection rates head from here. The modeling suggests that only 20% to 30% of those new cases are being formally diagnosed through testing.

More importantly, the modeling shows that the number of new severe cases requiring hospitalization could jump from about 17 a day seen at the beginning of the month to as many as 76 a day if transmission rates increase by 10% – a scenario that could challenge Oregon’s hospital capacity.

Public health officials did not announce any new formal restrictions Friday to combat spread of the disease. But they said the new forecasts were “troubling,” and asked Oregonians to redouble their social distancing, hygiene and mask wearing practices. They also asked the public to voluntarily limit indoor gatherings to fewer than 10 people for at least the next three weeks, and neither host nor attend such gatherings.

Prompting that recommendation, they said, was increased spread of the disease when people gather with family and friends to celebrate birthdays, weddings and holidays.

“That’s not surprising,” said Oregon Health Authority Director Pat Allen. “People are gathering with friends and family and there’s an inherent sense of safety in that circumstance. But when people from multiple households get together there is risk, and we tend to let our guards down.”

Allen also said the state continues to see outbreaks stemming from sporadic “under the radar” cases of community spread and larger gatherings. He cited a baseball team’s trip from Yamhill County to Douglas County that has resulted in 20 positive cases to date. He also said the state is seeing increased infections among young people getting together for exercise classes, fraternity parties bachelor parties.

“Tragically Oregonians have died as a result,” he said. “We cannot stress it enough: If we don’t (downward) changes in our infection rates, our trends will push Oregon into a very unfortunate situation.”

With the current rate of spread, state epidemiologist Dean Sidelinger said there should be adequate hospital capacity for the next 60 days to accommodate new severe cases. But if transmission rates increase, he said that timeline could shorten considerably, and hospitals would be forced to take other measures to expand capacity or conserve beds, such as limiting voluntary procedures again.

The Oregon Health Authority estimates that there have been 52,400 cumulative infections in Oregon to date, but only 20% have been diagnosed. The data also shows that Gov. Kate Brown’s stay-home order, coupled with increased hygiene and other measures, were effective in decreasing transmission rates before it was partially lifted. Since May 15, however, when 31 of Oregon’s 36 counties began the reopening process, transmission rates have increased by 25%.

Oregon reported an average of 277 cases a day during the last week, and hit a record number of confirmed and presumed infections Thursday with 389. Using the multipliers in the study, that suggests that the actual number of infections in Oregon could be as many as 1,400 a day. The state also reported Thursday that the number of Oregonians currently hospitalized with COVID-19 reached the highest level since April 15.

The Oregon Health Authority modeled three scenarios for the month of July:

Transmission rates remain the same: Under this scenario, the number of new daily infections more than triples by July 30, from 1,100 at the beginning of the month to 3,600. It shows a similar increase in the number of new hospitalized cases per day, from 17 to 49. This scenario projects 110,600 cumulative cases by July 30, which would equate to about one in every 38 residents having been infected.

Transmission decreases by 10% staring July 3: This is the optimistic scenario, yet even a 10% reduction in transmission rates would not stop growth of the pandemic. This scenario projects 1,600 new infections per day by the end of the month, and 87,000 total cases by July 30, with new hospitalizations increasing from the current rate of 17 to 24.

Transmission increases by 10%: Under this model, the number of new daily infections grows to 7,300 per day and the number of new cases hospitalized per day jumps to 76 by July 30. This forecast would result in 152,600 cumulative infections by July 30, which equates to about one in every 25 Oregonians infected.

The Oregon Health Authority ran the forecasts 11 times using software from the Institute for Disease Modeling. The estimated transmission rates and resulting projections were based on hospitalizations and diagnosis data. The modeling did not take into account the governor’s order requiring residents to wear face masks.

[ad_1] Nearly one year into the pandemic, Covid-19 is spreading at record high rates …