Two weeks ago, the United States Department of Health and Human Services began releasing weekly hospital statistics, allowing us to examine how individual hospitals are doing. Since we last examined the dataset on December 8th, the situation appears to have stabilized: total spare bed capacity has increased from about 17% to 23%, and spare ICU capacity has increased from 17% to 21%. These numbers include only the hospitals that provided enough information for us to complete the calculations, and include data only through Friday, December 18th. 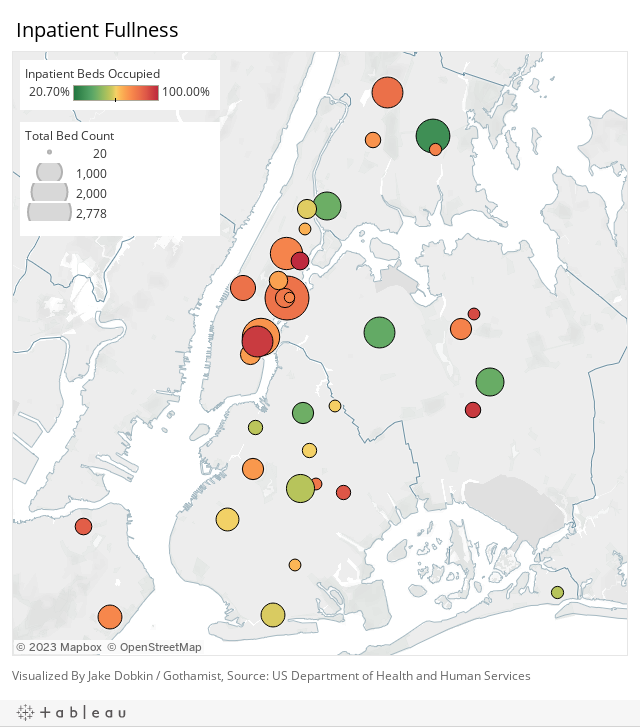 Most hospitals have spare capacity, at least for the adult inpatient beds that this map charts. Some city hospitals report total fullness above 90%, including Bellevue, at 95%, Jamaica at 96%, and Flushing at 91%. Only one hospital reports being above its total adult inpatient bed capacity: Metropolitan Hospital in Harlem, at 115%. Note several hospitals report having plenty of spare beds available. Maimonides is at 60% fullness, and Elmhurst at only 40%. Both were hit hard during the first wave.

Total bed capacity doesn’t matter as much as ICU capacity, however, because COVID patients often require treatment that can only be given in the ICU, such as ventilation. Let’s look more closely at that: 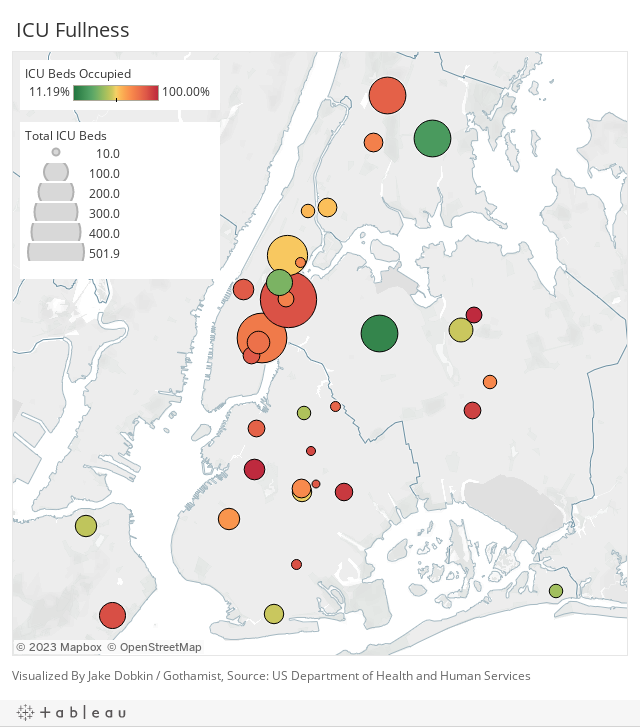 Here the story looks worse. Two hospitals report being over their total adult staffed ICU bed capacity: Methodist in Brooklyn, at 105% and Flushing in Queens at 150%. Note that these numbers, like the others in this story, are all 7-day averages for the week beginning on December 11th, so it’s not clear if either of these hospitals has been above capacity on every day of the week. Other hospitals report being over 90% ICU capacity, including Staten Island University, Jamaica, Interfaith, and Brookdale. Note that hospitals try to keep their staffed ICU beds at high capacity, because staffing empty beds costs money, so high capacity rates are not necessarily bad if spare capacity still exists; it depends on how quickly that spare capacity is forecast to be used.

Next, let’s look at what percentage of total beds are taken up by COVID patients: 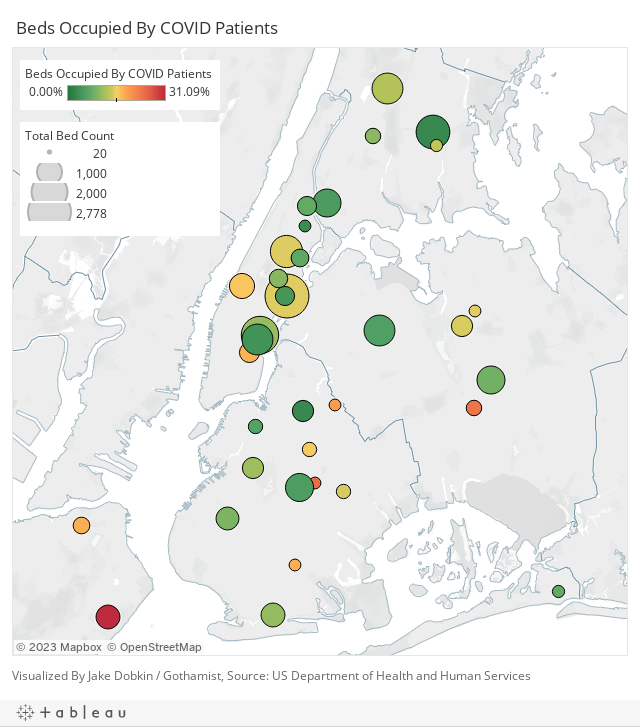 Here the situation seems less dire, because as a city we have plenty of adult inpatient beds, and so far, during the second wave, they have not been filled. Here Staten Island University Hospital stands out, with a reported 31% of its total beds taken up by COVID patients. Larger hospitals in Manhattan, with far more beds, have lower percentages, such as NYU at 11% and New York Presbyterian at 15%.

Finally, let’s look at the percent of ICU Beds taken up by COVID patients: 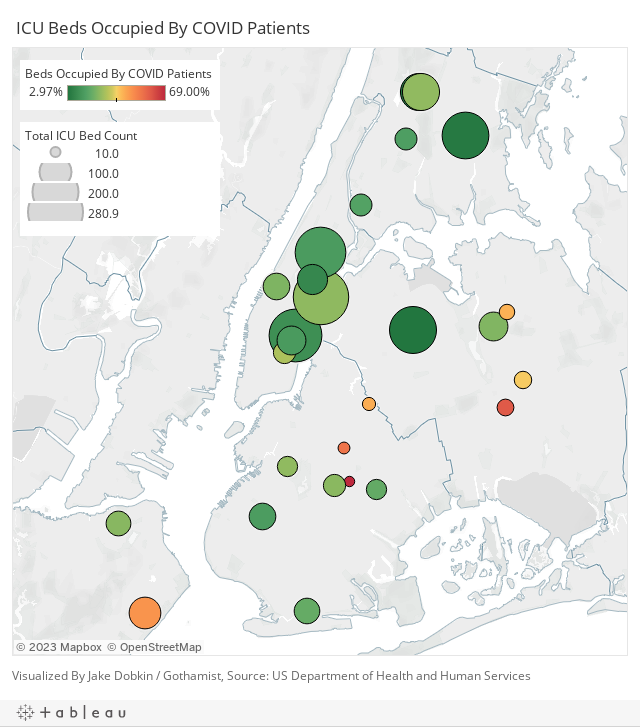 This analysis must be caveated by with several notes. As we mentioned in our first examination of the data, hospitals are reporting this data themselves, and if they report erroneous bed counts, it most likely will not have been caught by HHS unless the error was very obvious. Not all hospitals have reported all the required data for us to compute these maps: on some of the smaller hospitals you’ll see negative counts of “-999,999” for some figures, which indicate the hospital did not report them, citing privacy. Finally, not all hospitals in the city are included in this data set: it excludes veterans hospitals and certain speciality hospitals. For the hospitals that did report the necessary data, here are the trend lines, first for the city as a whole and then for the boroughs: 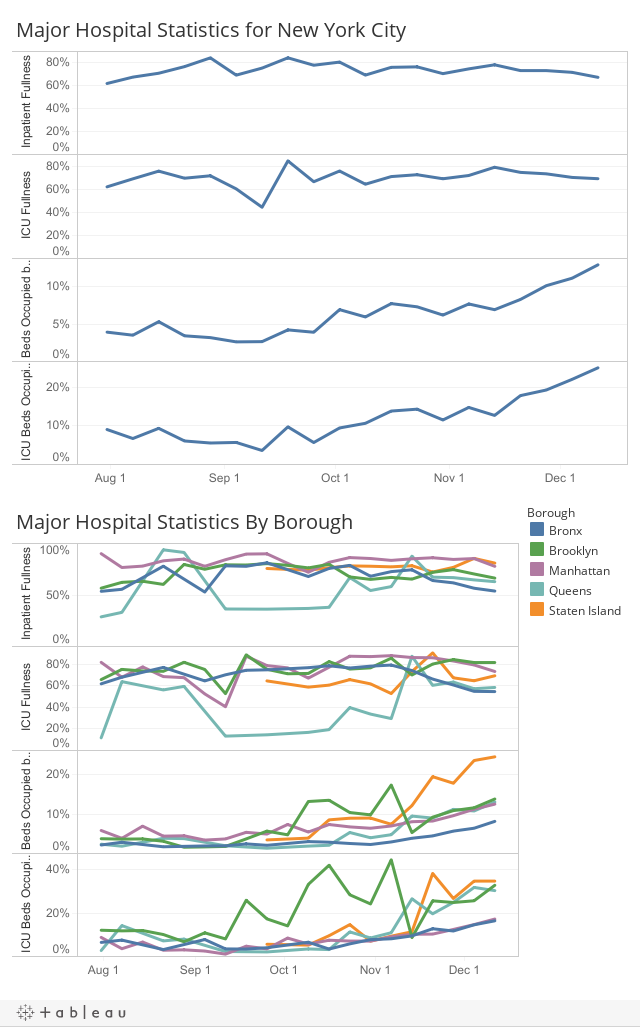 Here we see a mixed trend: total spare capacity and ICU capacity across the city has increased over the last few weeks (because “fullness” has decreased), but the percent of beds being taken up by COVID patients has increased. This could represent the hospitals clearing bed capacity by postponing certain procedures, or fewer sick patients avoiding the hospitals because of the news coverage of the second wave. It is hard to discern clear trends at the borough level, except to note the increase in beds filled by COVID patients in Staten Island since the beginning of November, and the Bronx seeming to do better in most of the statistics than the other boroughs.

We’ll continue to examine the data set as it is revised each week- let us know if you have specific questions or notice obvious irregularities in the data.