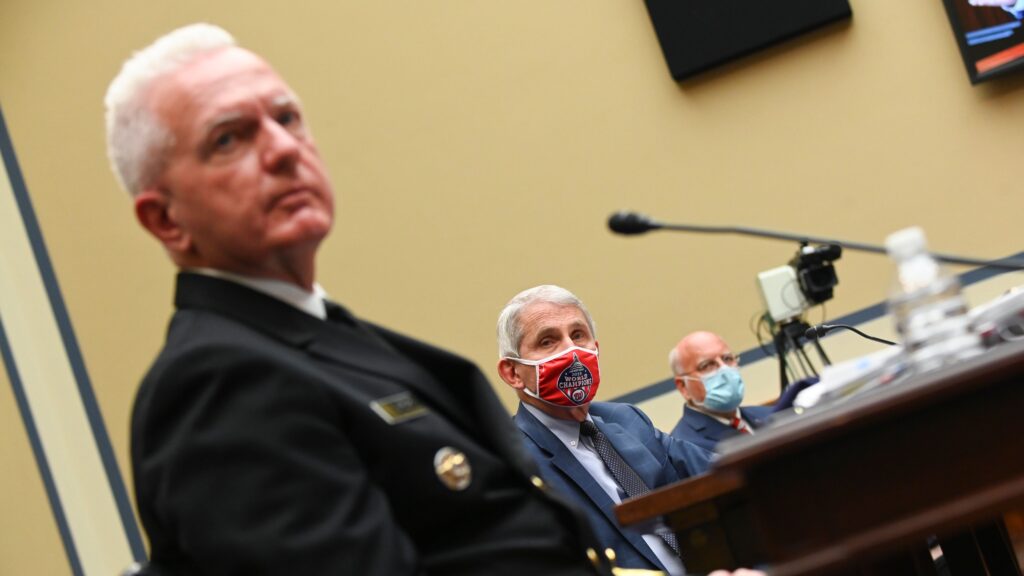 Public health experts reacted with alarm Wednesday to new Covid-19 testing guidelines issued by the Centers for Disease Control and Prevention, guidance that they said will make it harder to find and isolate people spreading the SARS-2 virus early and will undermine efforts to control transmission.

The guidance recommends against testing people who have been in contact with confirmed Covid-19 cases but who don’t yet have symptoms — even though such people can be infectious. It was crafted not by the CDC but by the White House coronavirus task force, and the nation’s best-known infectious disease expert, Anthony Fauci, didn’t sign off on it.

Critics see this as the latest in a string of events where the Trump administration has overridden its science agencies in a bid to boost the president’s public standing and re-election chances. They fear these brazen political incursions into public health policy are setting the stage for a premature approval of one or several Covid-19 vaccines before the election — and before ongoing clinical trials have gathered enough evidence to prove they work.

“This is a collective experience that grows more concerning each day. It is substituting potential partisan policy for good regulatory and public health science,” said Michael Osterholm, director of the University of Minnesota’s Center for Infectious Diseases Research and Policy.

“The two foundational organizations in this country for public health really have been the CDC and the FDA” — the Food and Drug Administration — and the credibility of both has just really been undercut,” Osterholm said.

Admiral Brett Giroir, assistant secretary of health and human services and the administration’s testing tsar, told reporters Wednesday that “all the docs” on the task force signed off on the new guidelines.

It quickly became apparent that was not true. When the guidance was finalized last Thursday, Fauci, a task force member and director of the National Institute of Allergy and Infectious Diseases, was undergoing surgery to remove a polyp from his vocal cords.

Fauci was not given clearance to speak to STAT on Wednesday. But a source familiar with the situation said Fauci had not voiced support for the final document.

“I am concerned about the interpretation of these [CDC] recs and worried it will give people the incorrect assumption asymptomatic spread is not of great concern. In fact, it is,” Fauci told CNN.

A senior official of the Department of Health and Human Services said it was clear over the five weeks of debate that led to the changes that some members of the committee had concerns with the revised guidelines, mentioning Fauci and Dr. Deborah Birx, the White House coronavirus response coordinator. The official spoke on condition of anonymity.

But Giroir cast the recommendations as having been approved by the entire task force.

Hahn is the commissioner of the Food and Drug Administration. Atlas, a public policy fellow at Stanford University’s Hoover Institute, and a critic of the lockdowns used to slow transmission of the SARS-2 virus, is a recent addition to the task force.

When asked directly if Fauci had signed off on the final version of the new guidelines, Giroir paused noticeably. “The only reason I’m hesitant is because I don’t want to talk about internal deliberations,” he said. “But yes, all the docs signed off on this before it even got to the task force level.”

The public health community has been vocal in its dismay over the new recommendation — both because it overrides CDC’s original guidance and because it risks turning testing into a diagnostic tool rather than a surveillance tool needed to track and try to suppress spread of the virus.

Some see it as the task force acting on President Trump’s oft repeated criticism that the country was conducting too much testing — that excessive testing was why the country leads the world in Covid-19 cases and deaths. “I said to my people: Slow the testing down, please,” Trump now famously said at a June 20 rally.

Ashish Jha, director of the Harvard Institute of Global Health, said if there was new evidence that justified changing the testing recommendations, it should be brought forward. But no scientific justification has been offered, and he is not aware of any.

Giroir said the intent of the new guidelines was not necessarily to decrease the number of tests being conducted in the country.

“It literally cannot be interpreted that we are inhibiting local public health. In fact, the goal is to put … more authority in the hands of the public health officials,” he said.

Testing asymptomatic people who have been in contact with confirmed cases can identify these people early and ensure they are both isolated, so they cannot transmit the virus, and monitored, in case they go on to develop severe disease.

The Infectious Diseases Society of America and the HIV Medicine Association called Wednesday for the reversal of the new guidance, saying it is critical to identify people infected with the disease, even if they are asymptomatic.

“In addition to individuals with known contact with someone who has tested positive, other groups of asymptomatic individuals are also important to test, such as those who work in nursing homes or in other industries with high risks of transmission. Testing of asymptomatic children may also be critical to support safe reopening of schools,” the organizations said.

The decision comes days after Hahn, the FDA commissioner, issued a controversial emergency use authorization for convalescent plasma, an antibody-rich infusion that is being widely used to treat severe Covid-19 cases.

The treatment has not been proved to be useful in a placebo-controlled clinical trial, but Trump called a Sunday evening news conference — on the eve of the start of the Republican National Convention — to trumpet the treatment as a major breakthrough. Hahn suggested it had been shown to reduce mortality by 35%, later walking that claim back.

An earlier emergency use authorization for hydroxychloroquine — also heavy touted by the president — was later rescinded when trials showed it didn’t improve survival and may have been harmful for some patients who received it.

At the CDC, time and again science-based guidance written by the agency has been revised in Washington by political staff. For instance, when churches were allowed to reopen for in-person services, the CDC had recommended against the resumption of choirs. That and other parts of the church guidance were ordered changed, reportedly by the office of Vice President Mike Pence.

“There is a pattern here that has occurred over a number of topics for both agencies over the period of recent weeks that is making a lot of people in the public health community at state and local and federal levels doubt the scientific integrity of these agencies — which is the worst thing that we can have happen to us in terms of public health credibility,” Osterholm said.

[ad_1] If you want your children to eat more fruits and vegetables, then you’re …