Nevada man, 25, becomes the first known case in the US of coronavirus reinfection

By Mary Kekatos Senior Health Reporter For Dailymail.com and Reuters

Researchers have identified the first case of an American patient who was reinfected with the novel coronavirus.

According to the report, the unnamed 25-year-old man, from Reno, Nevada, tested positive in April after showing mild illness.

He got sick again in late May and developed more severe COVID-19, the disease caused by the virus.

Forty-eight days after his first positive test, he received a second one.

‘This study likely represents a clear example of reinfection…reinfections are possible – which we already knew, because immunity is never 100 percent,’ Dr Kristian Anderson, professor of immunology and microbiology at Scripps Research in La Jolla, California told Reuters.

Health experts are concerned that a future vaccine may not be very effective if reinfection is possible over such a short amount of time. 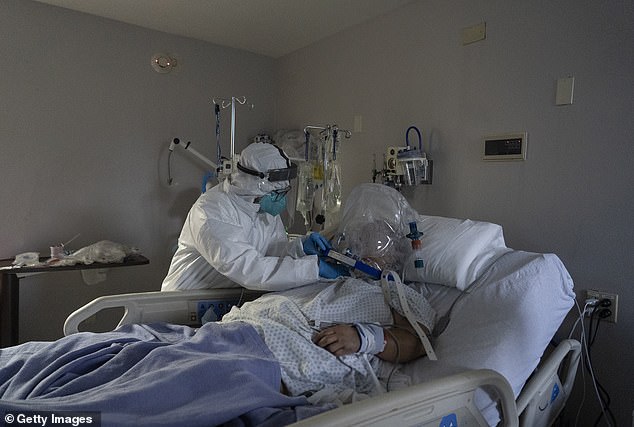 Researchers say the first known case of US coronavirus is a 25-year-old man from Reno, Nevada, who first tested positive in April after developing a mild illness and then later fell ill in May. Pictured: A member of the medical staff treats a patient in the COVID-19 intensive care unit at the United Memorial Medical Center in Houston, Texas, July 28 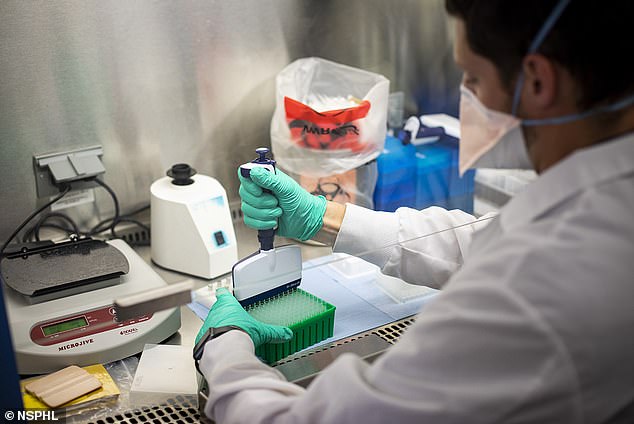 He had to be hospitalized and tested positive on June 5, marking 48 days after his first positive test. Pictured: A scientist at the Nevada State Public Health Laboratory running tests 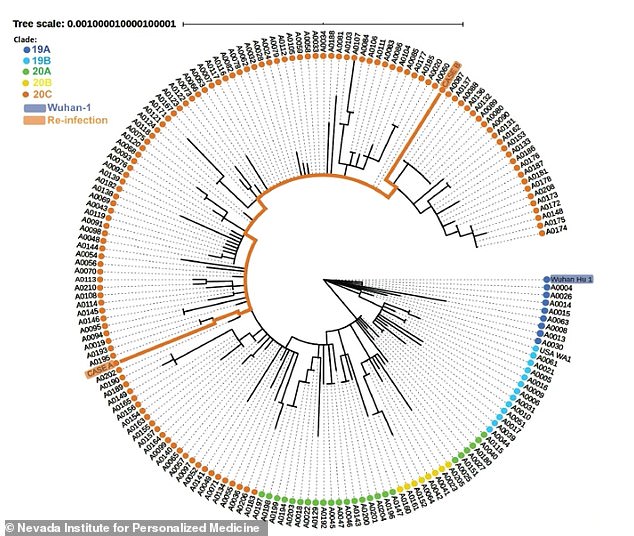 Lab tests determined the strains of the virus from each illness were slightly different , indicating a true reinfection (above)

During the first illness, the individual had symptoms including a sore throat, nausea, headache and diarrhea, according to the pre-print study.

He tested positive on April 18. His symptoms resolved by April 28 and he received two two negative tests on May 9.

Just a few weeks later, on May 31, the man reported symptoms including all the symptoms he had before as well as a fever and feeling dizzy.

Five days later, the patient’s condition worsened so much that he was hospitalized, and tested positive for SARS-CoV-2.

Bloodwork run by hospital staff showed that the man had antibodies against the virus.

Researchers say the man was neither immunocompromised nor was he taking immunosuppressant drugs.

A team at the University of Nevada, Reno School of Medicine and the Nevada State Public Health Laboratory said they were able to show through sophisticated testing that the virus associated with each instance of the Reno man’s infection represented genetically different strains.

Because the genetic make-up of the strains are different enough, this represents a true reinfection.

Researchers worked with the Washoe County Sheriff’s Office Forensic Sciences Unit to determine that the samples were from the same patient.

They emphasized that reinfection with the virus is probably rare, but said the findings imply that initial exposure to the virus may not result in full immunity for everyone.

‘We don’t know at what frequency reinfections occur and how that might change over time,’ Anderson said.

‘Before we have broader studies illuminating these questions, we can’t conclude what a single case of reinfection means for longevity and robustness of COVID-19 immunity and relevance for a future vaccine.’ 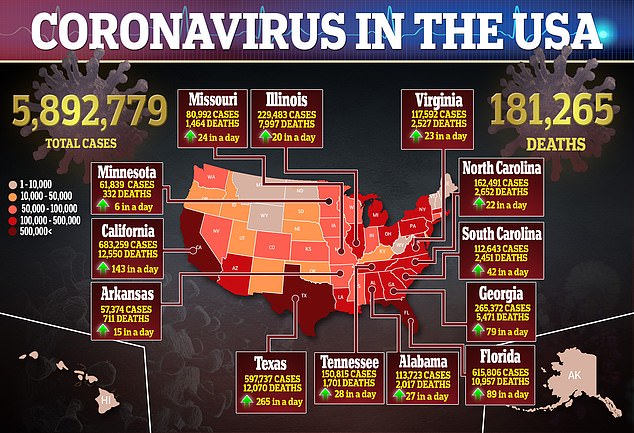 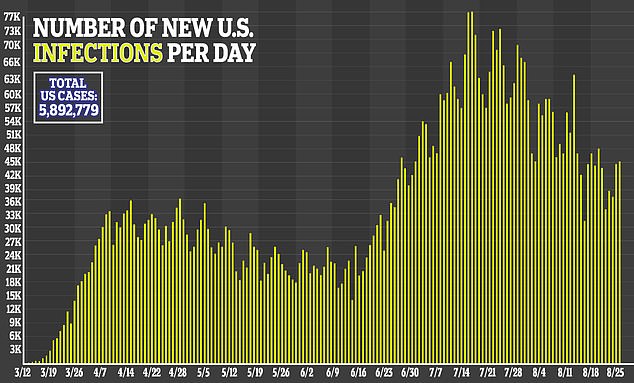 Mark Pandori, director of the Nevada State Public Health Laboratory, said that this finding does not reinfection is likely to occur again.

‘It is just one finding, but it shows that a person can possibly become infected with SARS-CoV-2 a second time,’ he said in a statement.

Cases of presumed reinfection have cropped up in other parts of the world, but questions have arisen about testing accuracy.

Earlier this week, University of Hong Kong researchers reported details of a 33-year-old man who had recovered in April from a severe case of COVID-19 and was diagnosed four months later with a different strain of the virus.

Additionally, two European patients, one in Belgium and one in the Netherlands, were reported to have been reinfected with the virus. 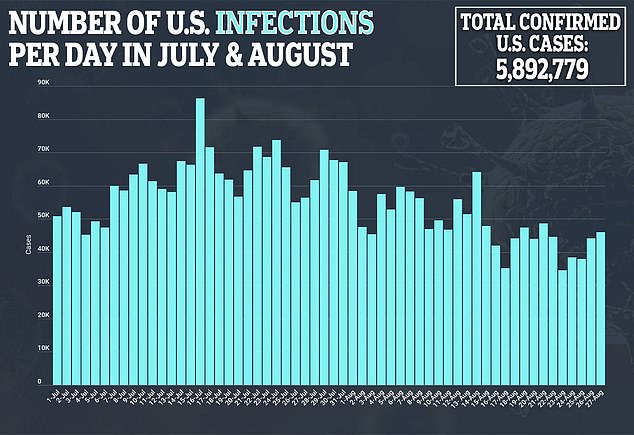 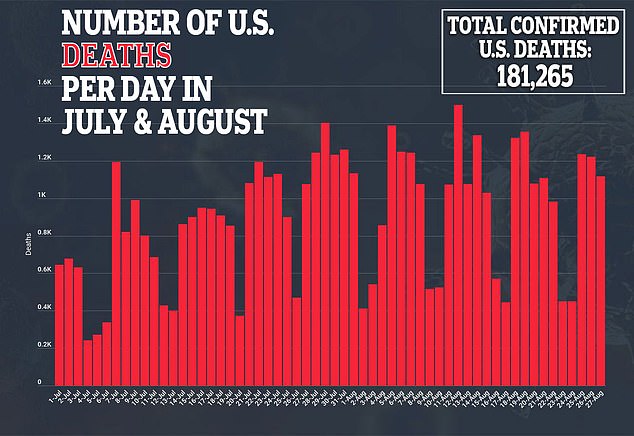 However, unlike the American man, the other patients developed mild cases of the virus during their second time with the infection.

‘You’d expect the second time around people to have much milder or ideally no symptoms,’ Dr Ashish Jha, director of the Harvard Global Health Institute, told NBC News.

This is because the immune system should recognize the virus and be able to respond much more strongly than it did the first time around.

Jha says the case of the Hong Kong patient is ‘completely consistent with that.’

Pandori urged caution considering the many unknowns that still surround our knowledge about the immune responses to COVID-19.

‘After one recovers from COVID-19, we still do not know how much immunity is built up, how long it may last, or how well antibodies play a role in protection against a reinfection,’ he said in statement.

‘If you’ve had it, you can’t necessarily be considered invulnerable to the infection”  a second time. 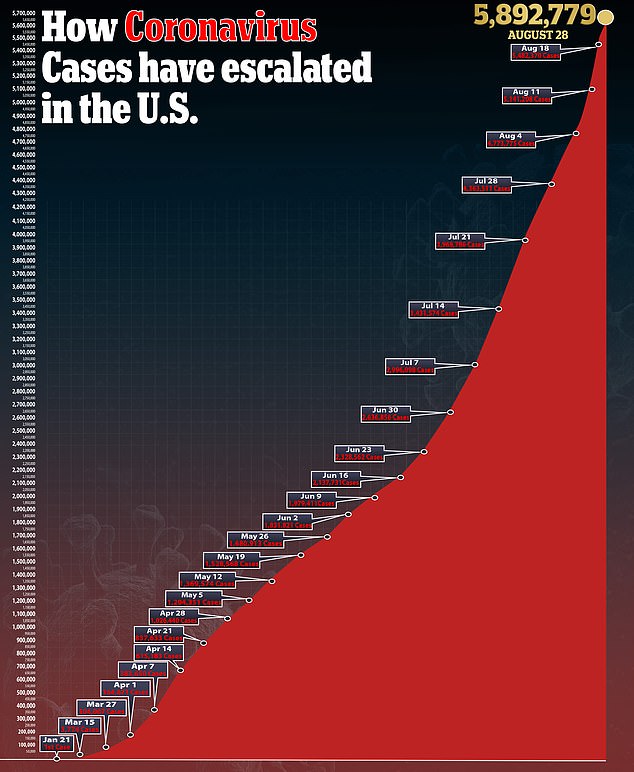