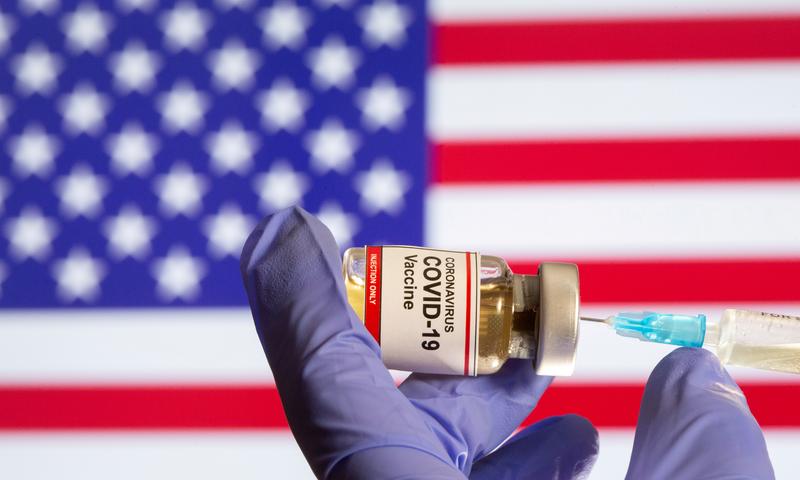 NEW YORK (Reuters) – American women, who traditionally make most of the healthcare decisions in their families, are more wary than men of the new, rapidly developed COVID-19 vaccines, according to a Reuters/Ipsos poll, presenting a potential challenge to efforts to immunize the public.

The Dec. 2-8 national opinion survey showed that 35% of women said they were “not very” or “not at all” interested in getting a vaccine, an increase of 9 points from a similar poll conducted in May when vaccines were still being developed.

Some 55% of women said they were “very” or “somewhat” interested in getting vaccinated, a drop of about 6 percentage points in the same time span. Meanwhile, 68% of men said they would get vaccinated, which is unchanged from May.

Overall, 61% of Americans said in December that they are open to getting vaccinated – a 4 point decline since the May poll. The latest survey also recorded a sharp drop in the number of parents willing to give their children the vaccine – 53% versus 62% in May.

Convincing women to accept the vaccine will be critical for slowing the spread of the novel coronavirus because mothers tend to be the ones who make doctor’s appointments and keep up with immunizations, said Rupali Limaye, director of behavioral and implementation science at Johns Hopkins Bloomberg School of Public Health.

“Women just tend to be more careful. They tend to do a lot more reading,” Limaye said, so assuring them that no shortcuts were taken in the vaccine approval process will be crucial.

Mothers make about 80 percent of health care decisions for their children and are more likely to be the caregivers when a child falls ill, according to the U.S. Department of Labor.

Among women who said in the Reuters/Ipsos survey they were not interested in the vaccine, 60% said they were “nervous about getting vaccinated right away with a new vaccine that has been approved so quickly.” And 48% of those disinterested women said “the risks of taking a new vaccine outweigh any benefits.”

Another 38% said they were not interested in the vaccine because they do not trust the companies making them and 27% said they do not think a vaccine will adequately protect them.

Britain this week began inoculations with a vaccine developed by Germany’s BioNTech and Pfizer – less than a year after the genetic code of the new coronavirus was first published. A panel of outside advisers to the U.S. Food and Drug Administration on Thursday gave a green light to emergency use of the Pfizer vaccine and FDA authorization was expected within days.

Scientists believe that “herd immunity” against the virus could be achieved once about 70% of the population has been exposed to it, either through natural infection or a vaccine.

One of the respondents in the Reuters/Ipsos poll, was Alice Bayless, a 56-year-old nurse in Merritt Island, Florida, who said she does not plan to get the COVID-19 vaccine even if the hospital where she works makes it available.

“They rushed it through so quickly they are barely getting FDA approval on it,” she said. “I just want to wait and see what happens.”

Bayless said older people and those with underlying health conditions should be vaccinated, but there is no rush for people not at high risk of severe COVID-19, the disease caused by the virus that has killed 290,000 people in the United States, the most in the world.

Tameka Dumas, 47, of Grenada, Mississippi, said she, as did many poll respondents, would like to first see how someone fares in the year following the vaccination.

“I think it has been rushed to get on the market too fast,” she said.

Politics also comes into play. According to the poll, Republicans, who have been generally less likely than others to wear protective face masks or express concerns about the virus, also appeared to be less likely to get vaccinated: 53% said they were interested in a vaccine, compared with 75% of Democrats.

The Reuters/Ipsos poll was conducted online, in English, throughout the United States. It gathered responses from 4,419 U.S. adults, including 1,216 who said they were not interested in getting a coronavirus vaccine. The poll has as credibility interval, a measure of precision, of about 2 percentage points for the entire sample and 5 points for smaller groups like African Americans.