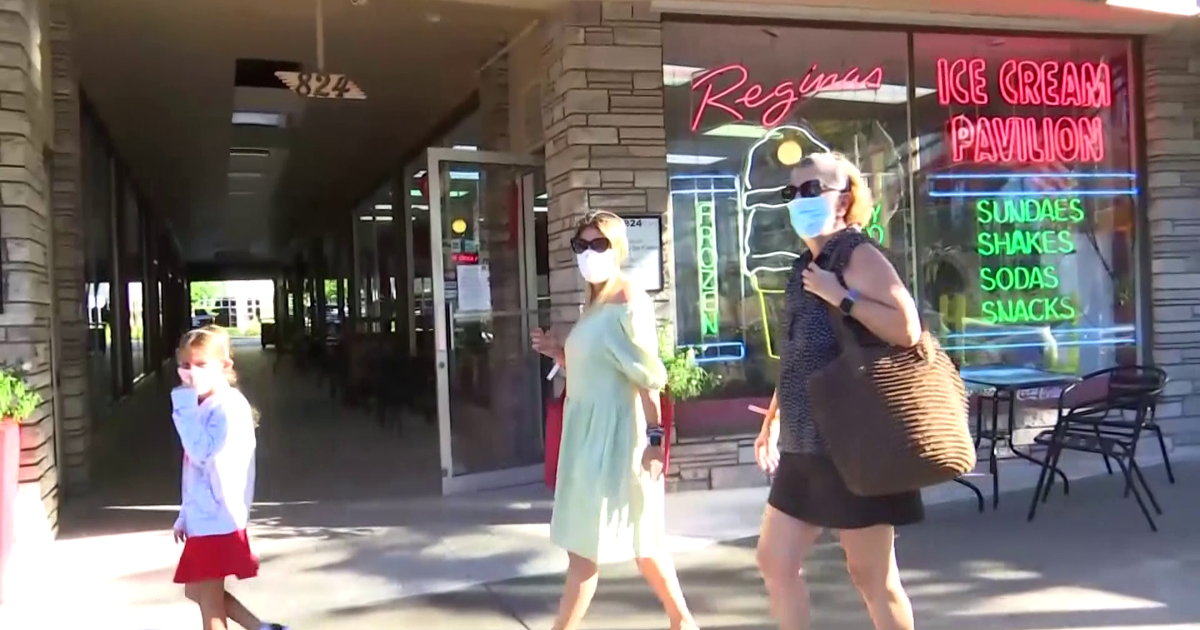 For the first time in more than two weeks, Florida reported fewer than 9,000 new coronavirus cases, but it’s no reason for anyone there to let down their guard. In Miami-Dade County, the number of COVID-19 hospitalizations went up Monday.

The news comes as Florida surpassed New York in confirmed coronavirus cases. Florida has no mandatory mask order, but one in Palm Beach County survived a legal challenge on Monday.

“They can’t tell me I have to wear a mask,” Florida resident Drew Read told CBS affiliate WINK-TV. “I’m not going to wear a mask to make somebody feel comfortable.”

At a Minnesota Walmart, a couple protested by wearing masks with the Nazi symbol. They have since been banned from the store.

Also sparking debate are plans to reopen schools in just a few weeks continues, there’s new concern about cases in children. Florida reported a 34% increase in total cases in those under 17 over an eight-day period and a 23% jump in hospitalizations.

The ripple effect is already putting the new season in question, with the league reportedly scrambling to trace the team’s movements and contacts. “[It] really stinks, not going to lie and sugarcoat it, not good for anybody,” Nationals’ manager Dave Martinez said.

The Philadelphia Phillies game against the New York Yankees was also called off Monday night because the Marlins had used the dugout.

In a glimmer of hope, the final phase of testing in the world’s biggest COVID vaccine study launched Monday. The first of 30,000 participants are now receiving experimental shots.

The vaccine was developed by the National Institutes of Health and the Massachusetts biotech company Moderna. It’s one of several possible vaccines — showing some progress — yet with no real promise of being effective.

Dawn Baker, a TV anchor at CBS affiliate WTOC-TV in Savannah, Georgia, is one of the people who took part in the vaccine trial.

“I feel like nothing happened today, even though I know something very big did,” she said. “I got tired of sitting here worried that I can’t do any more than wear a mask and try to stay away from people.”

Each participant will receive a second dose 28 days later and will be monitored to see if the vaccine can effectively prevent infection. Half of the patients received the vaccine and the others will get a placebo.

The Moderna vaccine is a new kind of technology that uses a piece of RNA or genetic code that tells the cells in the body to make a modified “safe” version of viral protein. In turn, that protein triggers an immune response to fight the coronavirus.

Across the country, social interactions appear to be fueling the spread. Nearly three dozen lifeguards in two New Jersey towns tested positive after gatherings, while 10 firefighters and 13 lifeguards tested positive in California’s Newport Beach. Forty members of a church in Alabama became infected after attending services.

[ad_1] Despite early worries, flu patients are not competing with Covid-19 patients for ventilators, …