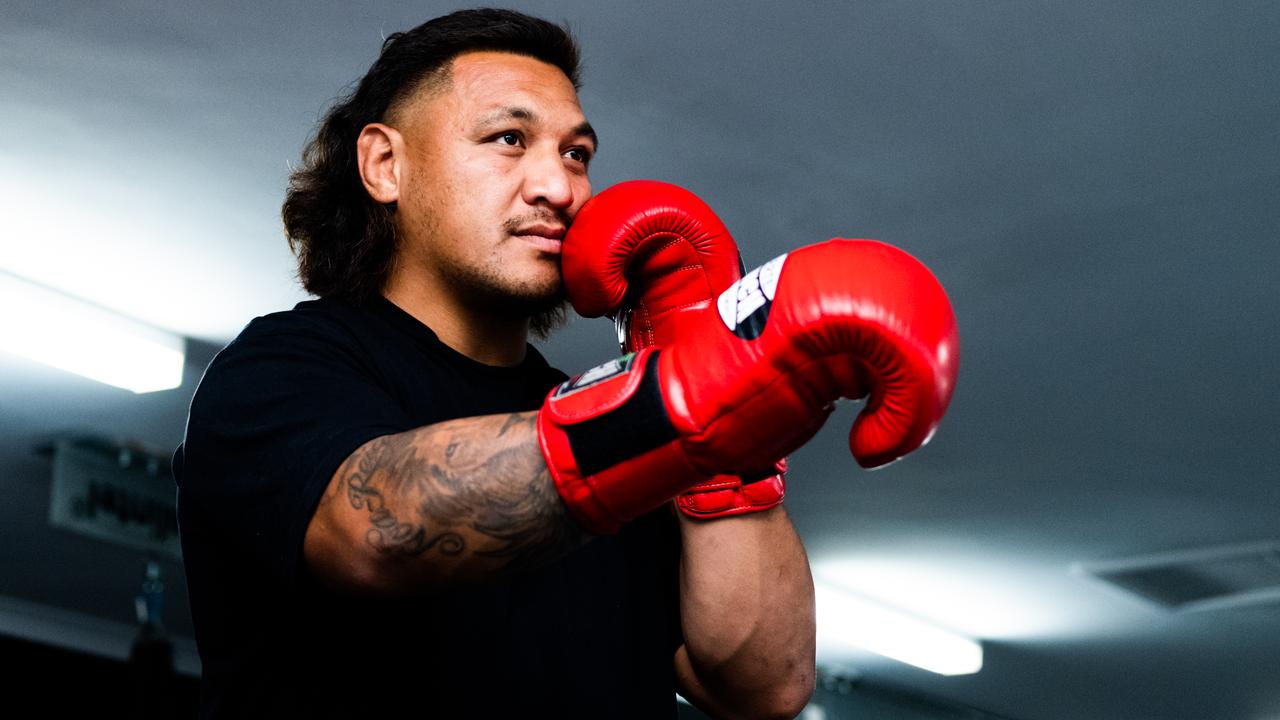 Josh Papalii will enter the 2021 premiership in the best shape of his career after a punishing pre-season of boxing training has seen the Queensland Origin enforcer shave a whopping 15kg from his frame.

One of the most feared defenders in the NRL, Papalii will test his hitting power in the ring when he squares off against former Maroons prop Ben Hannant in the All Stars boxing event in Townsville on Friday night.

At 36, Hannant will be eight years older than Papalii, but the 247-game NRL veteran is arguably fitter in retirement, having won the Noosa triathlon in the 100kg-plus division five years ago.

Papalii is notoriously guarded about his true weight, but it is understood the Maroons hardman has dropped more than 30 pounds in the past two months as he braces for his boxing debut.

“It’s a bit different to my usual training for rugby league.

“It’s something I am really enjoying. It has taken my mind away from football and it’s made me a bit hungrier than most pre-seasons.

“I think this boxing training will be good for my football this year.”

Papalii is the main attraction on a six-fight card that includes current and former NRL stars.

But all eyes will be on big ‘Papa’, whose cousin Alex Leapai famously fought for the heavyweight world title in his loss to Wladimir Klitschko in Germany in 2014.

“Just because my cousin fights, doesn’t mean I will be a good fighter,” Papalii said.

“I always get nervous before NRL games and this is all new to me so it’s going to be a unique experience. I want to make sure I’m ready for it.

“Ben Hannant will give me a run for my money. He was always fit for a prop and post-football he is keeping fit doing triathlons and stuff like that.

“The hardest thing about boxing is that it’s a lonely journey. For seven weeks now, I’m training to go into the ring on my own.

“I’m not sure about knocking him out. I haven’t dropped anyone yet in training so there will be no one else to help me when I get in the ring.”

Wests Tigers may have landed their long-term choice at fullback a little earlier than expected, but Daine Laurie faces some stiff competition for the role in 2021.

The death of a man who fell from a balcony at one of the most famous hotels in Surfers Paradise on Friday night is believed to be the result of an accident.

The death of a pregnant woman, her partner and a motorcycle rider is forcing the Queensland government to change its youth bail laws.

A police officer and close friend have spoken out about the ‘broken’ Youth Justice System that they believe lead to Jennifer Board’s death.

A Twitter user has snapped a horror picture of a children’s pool littered with bluebottles at Australia’s most iconic beach.

A young woman allegedly found with a 22-calibre loaded firearm, a silencer and $100,000 has been arrested in a quiet residential street on the Sunshine Coast.