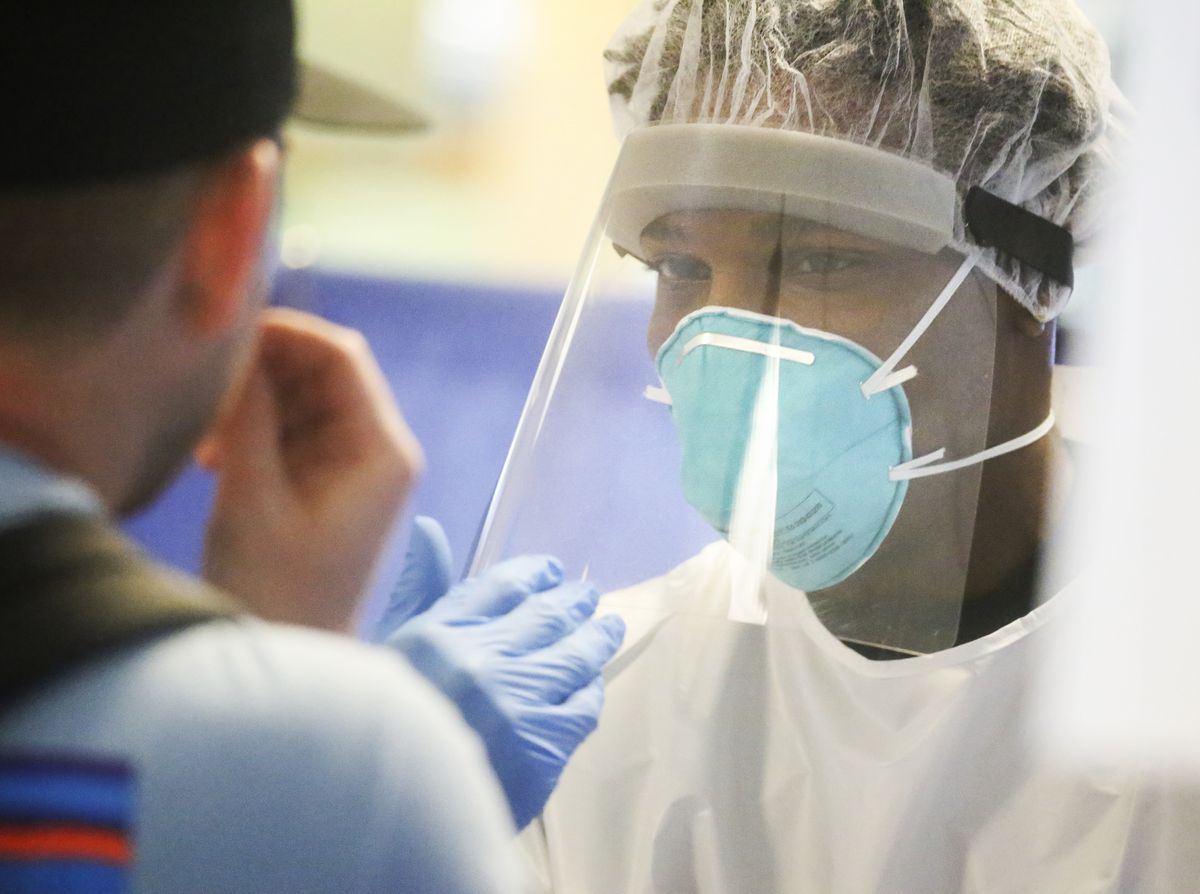 We’re making coronavirus coverage available without a subscription as a public service. But we depend on reader support to do this work. Please consider joining others in supporting local journalism in Alaska for just $3.23 a week.

In a separate announcement, Fairbanks Memorial Hospital reported that a 67-year-old man died Sunday at the hospital. The death was not included in the state’s statistics on Sunday but will be reported the following day. Additional details about the death were not immediately available.

The 231 new cases reported by the state include 186 Alaskans and 45 non-residents, according to the Department of Health and Social Services. Five more people were hospitalized with COVID-19, with a total of 35 people hospitalized with confirmed cases statewide and another eight under investigation.

Of the new cases announced in residents Sunday, there are 154 cases in Anchorage, nine in Fairbanks, three in Eagle River, two each in North Pole, Palmer, Juneau, Wrangell and an area in the Yakutat plus Hoonah-Angoon area, and one case each was reported in Chugiak, Homer, the Yukon-Koyukuk area, Houston, Wasilla, Ketchikan, Prince of Wales-Hyder area, Sitka and Unalaska.

Thirty-five people with COVID-19 are currently hospitalized and another eight people who may have the virus are in the hospital.

As of Sunday, Alaska had reported 3,102 confirmed cases of COVID-19 in Alaska, according to the DHSS coronavirus dashboard. More than two-thirds of the cases are currently active.

Twenty-one Alaskans have died of the virus since the beginning of the pandemic. There have been 115 Alaskans hospitalized because of COVID-19 since March.

Officials reported 34 non-resident cases Sunday in Seward, three in Fairbanks and one in Ketchikan. Seven of the cases were marked as “unknown” by DHSS.

As of Sunday, 950 people in the state have recovered from the virus since the pandemic began, although 2,132 COVID-19 cases are active.

The state has conducted more than 207,000 tests since March, according to DHSS. Roughly 1.9% of all COVID-19 tests were positive during the last three days.

The Anchorage Health Department announced Saturday that there was a COVID-19 exposure on July 17 at the Anchorage Samoan Assembly of God in the Mountain View neighborhood. The department advised people who were at the church on that day should monitor for symptoms for 14 days following the exposure and get tested if they experience even mild symptoms.

This is the first church to be added to the health department’s list of potential exposures. The list also includes bars and restaurants.

Cases have continued to drastically rise throughout Anchorage, statewide and throughout the country. Anchorage Mayor Ethan Berkowitz restricted capacities on bars, restaurants and entertainment facilities Friday in an attempt to curb the virus from further spreading. The restrictions also limit the number of people allowed to gather in groups.

Sunday marks the city’s highest increase in cases reported in a single day. In the Anchorage Borough, 958 people were currently infected with the virus as of Sunday.

Anchorage’s most recent restrictions were put in place out of concern that hospitals may not be able to keep up if case counts continue to rise. The state’s intensive care unit beds were nearly half full Sunday, with 86 out of the 169 units open. More than half of the state’s 1,400 inpatient beds were filled Sunday, with 850 occupied.

The virus was introduced to the processing plant by an employee who contracted COVID-19 through community spread, the city wrote.

The seafood employees are all in isolation and contact investigations are ongoing, the city said. The city did another round of testing on the 100 employees on July 22.

Officials in Juneau also announced 16 people tested positive for the virus unrelated to the seafood processing plant Saturday. The cases are likely due to community spread travel and secondary transmission, health officials in Juneau said.

Outbreaks of COVID-19 in the seafood industry have multiplied in previous weeks. Ninety-six seafood workers in Seward tested positive for the virus last week. A factory trawler carrying 85 infected crew members traveled to Seward from Unalaska last week to dock before sending the infected employees to Anchorage to quarantine.

In states such as Florida, California and Texas, hospitals have become overwhelmed by enormous spikes in COVID-19 patients. The case numbers have continued to rise throughout the country during the last month. More than 4 million Americans have contracted COVID-19 and over 145,000 have died of the virus as of Sunday, according to the Centers for Disease Control and Prevention.

[ad_1] In a year of endless viral outbreaks, the details of the Diamond Princess …