The chance to get the first dose of a COVID-19 vaccine will be at a premium in Los Angeles County next week as a continuing supply crunch and a hefty queue of those needing a second shot will leave few opportunities for those looking to start their inoculations, a top health official said Friday.

Most appointments offered at the major county-run vaccination sites will be needed for second doses, according to Dr. Paul Simon, chief science officer for the L.A. County Department of Public Health. At the county’s five mega-PODs, or mass points of distribution, only a very limited number of people will be able to receive their first doses Monday.

“We’re just struggling with the supply, the limited supply, and feeling an obligation to make sure that people that had a first dose are able to get their second dose,” he said during a briefing. “But we know, just based on the numbers, next week at least in our sites, beyond Monday, we really have to stick with the second doses. When we get to the following week, it may be a slightly different story if we are able to get a larger supply of a vaccine. But we’ll have to wait and see.”

In the face of constrained and inconsistent supplies, the county is reserving sufficient doses to ensure there is enough for everyone who has already received the first shot of either the Pfizer-BioNTech or Moderna vaccines.

Because of that, residents who receive their initial dose need to get back in line weeks later. When the county’s total vaccine supply remains flat, or goes down, that leaves little wiggle room to also offer first doses.

Here’s the latest on second-dose vaccine appointments in L.A. County 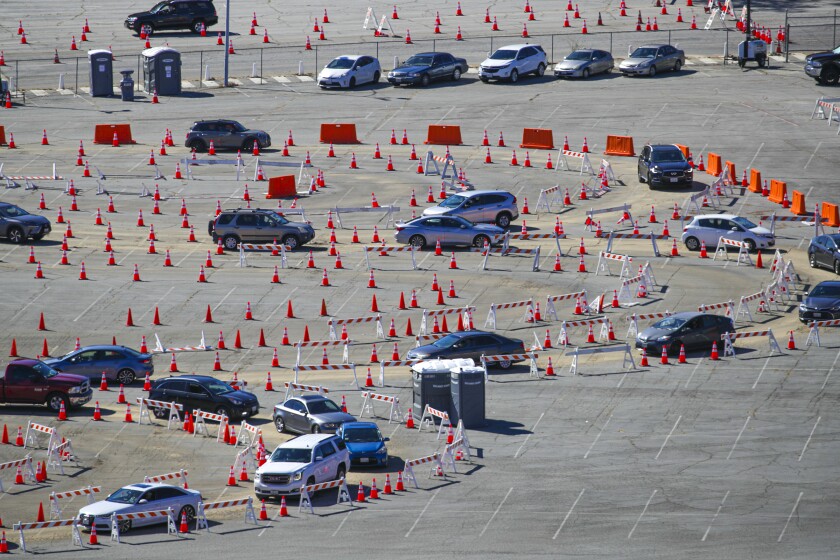 Here’s the latest on second-dose vaccine appointments in L.A. County

Wondering about how to get your second dose appointment? You’re not alone. L.A. County has updated its guidance again. Here’s what you need to know.

County officials said 184,625 doses arrived this week. While a boost from last week’s total, shipments need to be much larger to keep up with demand and allow additional pools of Angelenos to receive their first shots.

“If we do continue to receive increasing supplies, obviously we’ll be able to expand and continue to offer first doses,” Simon said. “Certainly, we want to do that.”

Cumulatively, more than 1 million doses of COVID-19 vaccine have been administered in L.A. County, and nearly 850,000 people — or about 11% of the population of those 16 and over — have received first doses. Roughly 2.6% of Angelenos in that age range are fully vaccinated.

The bottleneck isn’t unique to L.A. County. Regions throughout California have reported similar problems and have had to take similar steps to make sure people don’t miss out on the second shots.

First-dose clinics have been paused in Napa County as officials catch up on giving second inoculations.

“Although it’s amazing that the vaccine is here now, we just don’t have enough of it,” said Dr. Karen Relucio, Napa County’s public health officer. “Supplies are unpredictable. We’re running on thin margins.”

So far, more than 4 million COVID-19 vaccine doses have been administered throughout California. 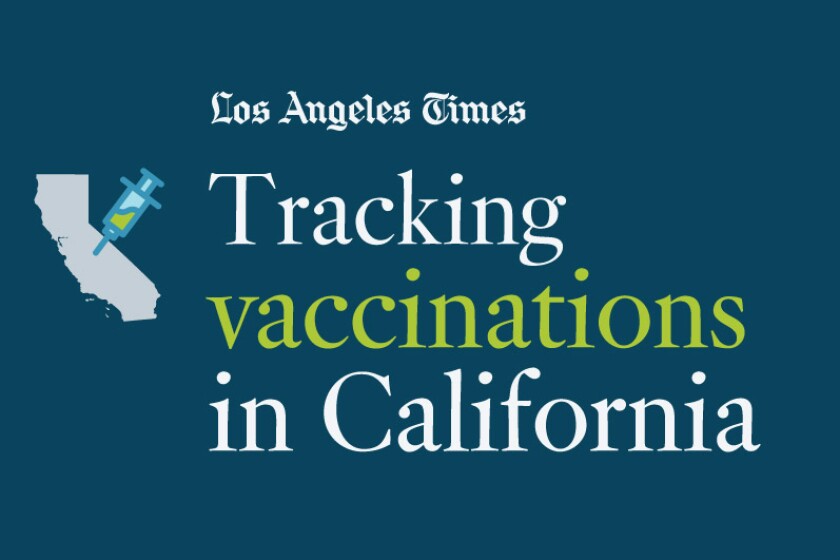 Experts say about most Americans will need to be vaccinated to bring the coronavirus pandemic under control. Track California’s progress toward that goal.

According to the Centers for Disease Control and Prevention, nearly 7 million doses of the vaccine have been shipped, and 6.8 million have been delivered to health providers in the state. That means, nearly 62% of the available supply has been used.

Officials said the state is expecting a vaccine allocation of more than 1 million doses next week, and a similar amount the week after. Previously, the state had been allocated roughly 300,000 to 500,000 doses per week.

The supply, while increasing, remains low compared to what’s needed, and eligibility is limited. California health departments can currently administer vaccines to healthcare workers, first responders, staff and residents at long-term care facilities such as nursing homes and adults who are at least 65 years old.

They also have the option of doling out doses to those who work in the fields of education, emergency services and food and agriculture — but many counties have yet to open eligibility to those groups, given supply constraints.

L.A. County, for instance, is accepting appointments only for healthcare workers, residents of long-term care facilities and adults who are at least 65 years old.

Together, those groups comprise about 2 million people, meaning 4 million doses would be needed to fully vaccinate those who are currently eligible — to say nothing of the millions more Angelenos who still need to be inoculated.

“Unfortunately, the biggest issue we continue to face in our ability to vaccinate is a scarcity of supply and variability in the amount of vaccines we receive from week to week,” Simon said. “This has been an issue across the country, and it makes planning very challenging.”