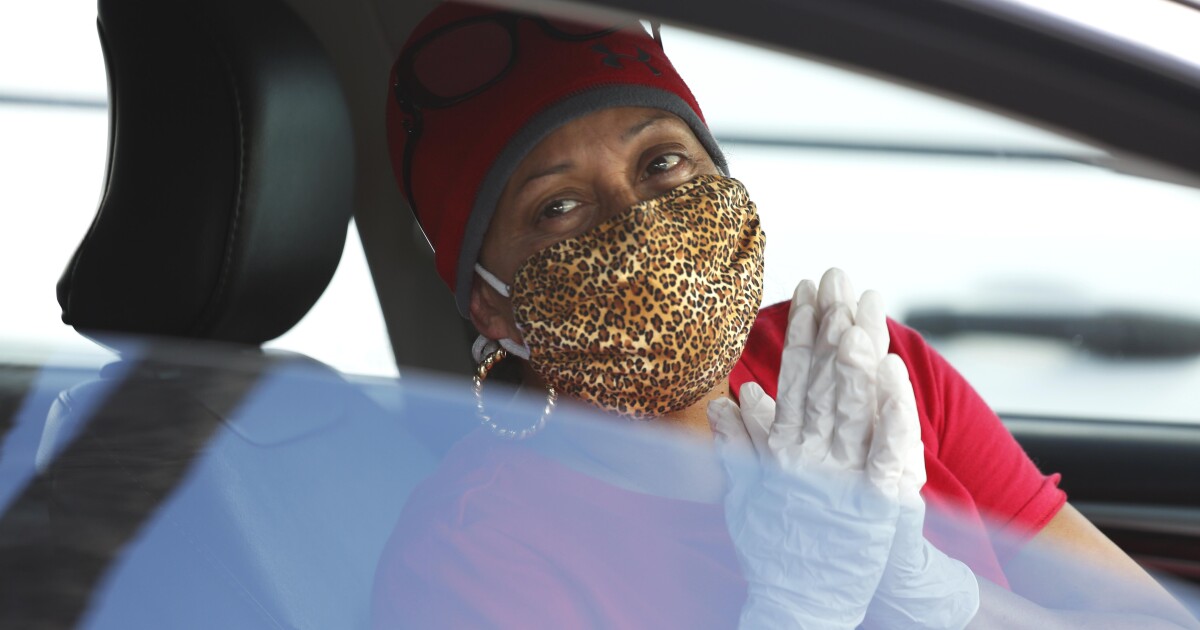 Officials did not disclose any information about the people who died because in some cases their family members were still being notified, they said. In addition, they said that two deaths previously reported by the county have been dropped from the total because one was found to be a resident of a different county and the other, a Lancaster teenager, may be attributed to other causes pending investigation by the Centers for Disease Control and Prevention.

L.A. County reported an additional 421 confirmed cases of the virus for a total of 1,229, including 54 in Long Beach and nine in Pasadena. A total of 253 people were at some point hospitalized, which amounts to about 21% of all positive cases, said Barbara Ferrer, director of the L.A. County Department of Public Health.

The number of coronavirus cases in California has surged past 3,000, and officials say the COVID-19 growth rate is such that it could overwhelm hospitals in the coming days and weeks.

Meanwhile, President Trump wrote Thursday in a letter to governors that the federal government is working on new standards for categorizing counties as high, medium or low risk.

“There is still a long battle ahead, but our efforts are already paying dividends. As we enhance protections against the virus, Americans across the country are hoping the day will soon arrive when they can resume their normal economic, social, and religious lives,” he wrote.

The letter is a further sign that Trump is eager to relax federal guidelines on school closures and limiting social gatherings in order to boost the stalled economy. Public health experts have warned that the president is moving prematurely and there’s not enough information to show that the pandemic has been slowed.

Trump said the plan would involve “robust surveillance testing” to “monitor the spread of the virus throughout the country.”

California’s death toll inched closer to 80 by midday Thursday, still far fewer than the 285 deaths in New York, which has become the national epicenter of the coronavirus crisis. But officials said California needed to brace itself for far more cases and deaths.

“The worst days are still ahead,” Los Angeles Mayor Eric Garcetti said Wednesday. “We’ve taken actions earlier and swifter [than other cities], but no one is immune from this virus.”

California’s top medical advisor said Wednesday that COVID-19 cases in the state continued to double every three to four days.

That pace, he said, is on par with that of New York, where some hospitals are packed.

If that rate holds, California hospitals could see a surge in patients in one to two weeks, Dr. Mark Ghaly, the state’s secretary of Health and Human Services, said during a Facebook news conference.

“We originally thought that it would be doubling every six to seven days; we see cases doubling every three to four days,” Ghaly said. “[We’re] watching that trend very, very closely.”

San Francisco leaders said Wednesday it was plausible the city could face a crisis similar to that of New York City and fall short 1,500 ventilators and 5,000 hospital beds.

“It is not even a question as to whether we will need more,” Mayor London Breed said during an hourlong news conference.

Nicholas Jewell, a biostatistics researcher at UC Berkeley who has been tracking the pandemic, said the coronavirus was spreading rapidly throughout the U.S., at a rate quicker than or on par with countries hit the hardest.

While the state continues to try to gain a clear picture of the outbreak, Jewell said the expected surge in the coming weeks did not mean social-distancing and shelter-in-place orders were not working.

“We knew going in we will not see any impact of shelter in place for at least two to three weeks,” he said. “We have to be patient at this point and stay the course.”

Gov. Gavin Newsom echoed that message and said the state had early data indicating the measures might be slowing the virus’ spread.

“We know it’s had an impact on bending that curve and buying us time,” Newsom said. “Every day, that is another day that we’re getting more assets, more physical and human resources, prepared for a worst-case scenario.”

Across the state, public health officials reported a continued increase in COVID-19 cases, including in Los Angeles County, where the county health officer on Wednesday ordered that all those who tested positive for COVID-19 self-isolate, along with those in close contact with the infected.

They include 12 cases among members of the Los Angeles Police Department, which had 11 officers and one civilian employee test positive, as of Tuesday. Three members of the LAPD command staff are among the dozen identified as having contracted the virus.

The faculty member, who is being treated in a hospital, worked in the child development department and had not been on campus since March 13, Los Angeles Valley College President Barry Gribbons wrote in a letter to the campus community this week.

Cases of the virus continued to tick upward elsewhere in the state.

San Bernardino County recorded 54 COVID-19 cases and two fatalities from the disease as of Thursday. The number of confirmed cases has tripled in less than a week; on Monday, there were only 17.

Two men — a 50-year-old and 46-year-old — died of the coronavirus this week. Both had underlying health conditions, according to the county. Acting County Health Officer Dr. Erin Gustafson said in a statement that the deaths were a “sad reminder of the seriousness of this pandemic.”

“At the same time, for all of us,” she said, “it emphasizes the importance of staying at home when we can and practicing good hygiene and social distancing.”

In Riverside County, 107 COVID-19 cases were confirmed as of Thursday, an increase of 37 from the day before.

Eight people died this month in Riverside County because of the virus. All of those individuals were 70 or older and some had underlying health conditions, said county spokeswoman Brooke Federico. Seven of those deaths were in the Coachella Valley, and one was in the mid-region of the county.

Statewide, more than 3,100 of those tested have been confirmed to have infections.

Public health officials emphasized that the actual number of people infected is almost certainly higher, but an accurate count is impossible because so few tests have been given.

Newsom announced that testing in the state had been conducted on more than 66,800 people but said that was insufficient to give an accurate picture of what was happening.

There were at least 22 state laboratories, seven hospitals and two private outfits conducting tests, as of Tuesday.

UCLA Health sent a message to patients in its network Thursday announcing its capability to administer 500 COVID-19 tests daily “in different clinic locations throughout the region and within our hospitals.” Test results will be available in two to four days, according to the message.

So far in L.A. County, more than 6,300 people have been tested for the virus. Of those, 11% have tested positive. Officials said 160 people who tested positive had been hospitalized at some point for the illness. There are currently 44 hospitalized individuals, including four who are in their 30s.

Roughly 1% of those who have tested positive in the county have died. The United States’ mortality rate for COVID-19 is 1.5%, a rate higher than that for the flu.