With intensive care units full and projections showing big increases in hospitalizations through New Year’s Day, Southern California’s medical system is faced with the prospect of not being able to provide critical medical care to everyone who needs it, which would significantly increase the chances of patients dying as they wait for help.

Already, hospitals are juggling resources to keep up, placing the overflow of ICU patients in other parts of hospitals not designed for them, clearing out critical care wards of patients who can survive elsewhere and in some cases keeping patients on ambulances for as long as eight hours until space is available.

But much more wrenching choices could be ahead as the COVID-19 surge shows no signs of slowing down, and there is little hope for the arrival of an army of additional medical professionals who can greatly expand intensive care unit availability through the end of the year.

Many hospitals are preparing for the possibility of rationing care in the coming weeks as the number of patients exceeds their staffs’ abilities to care for them. A document obtained by The Times outlining how to allocate resources in a crisis situation was recently circulated among doctors at the four hospitals run by Los Angeles County.

The guidelines call for a shift in mindset that is unfamiliar to many medical providers.

Coronavirus Today: The rich want to jump the line 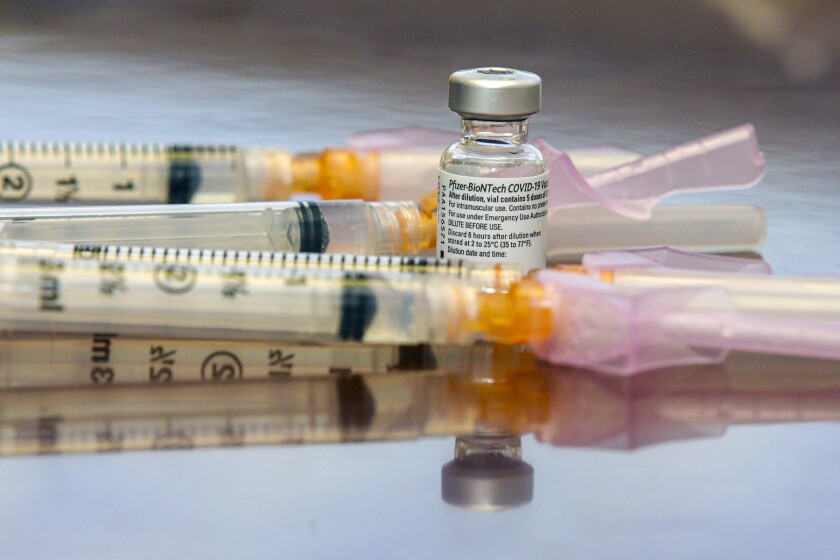 Coronavirus Today: The rich want to jump the line

Hoping to get a vaccine, they’re making their assistants pester doctors daily and exploring five-figure gifts to hospitals.

Instead of trying everything to save a patient, their goal during a crisis is to save as many patients as possible, meaning those less likely to survive will not receive the same level of care they would have otherwise. Doctors will no longer be pulling out all the stops to save a life but instead strategizing about how to keep as many people as possible from perishing.

“Some compromise of standard of care is unavoidable; it is not that an entity, system, or locale chooses to limit resources, it is that the resources are clearly not available to provide care in a regular manner,” the document reads.

L.A. County Health Services Director Dr. Christina Ghaly said in an email that the guidelines were not in place as of Friday night but that they were essential to develop given the surge has arrived and “the worst is yet to come.”

“We have enough beds, supplies, and equipment for now, but we don’t have enough trained staff for the number of patients who need care. We have brought in new staff, retrained and redeployed staff from other areas of the system, and have requested additional resources from the state,” Ghaly wrote. “But these measures are not anticipated to be enough to meet the continuously escalating number of patients that are presenting across the county for care.”

Across the nation, it has already become harder to get admitted to the hospital with COVID-19 symptoms today than it was a couple of months ago, said Dr. Kirsten Bibbins-Domingo, UC San Francisco chair of the department of epidemiology and biostatistics.

This sets up the potential for a deadly Catch-22 already seen in hard-hit places in China, Italy and New York earlier in the pandemic — hospitals so crowded that people have to be extremely sick before they’re admitted, by which time, it may be too late to save them.

Earlier in the pandemic, some less critically ill patients in hot zones were asked to return home instead of being admitted to an overcrowded hospital. Some people deteriorated at home and later died. Had they been admitted earlier, as would have been the case if the hospital were less crowded, they’d have a much higher chance of surviving.

In Wuhan, China, a steelworker this year recounted to The Times about how, by the time his father got a hospital bed, it was outside the ICU, and no nurses were available. His father died a week after he was admitted. In April, an emergency room physician in New York City told The Times that patients were advised to stay away from the hospital until the last minute, but then it would take three to four hours for an ambulance to arrive. A patient’s condition can decline precipitously in that time.

“When hospitals start to to get full … we subtly change our thresholds for admitting someone to the hospital,” Bibbins-Domingo said. “So maybe last month, we might say, ‘Wow, you’re not getting enough oxygen. Let’s admit you to the hospital because we want to be more cautious.’ And when a hospital is full, that is a time when we might … say, ‘Well, why don’t we wait another day and see how you do?’”

Symptoms can worsen so quickly that it may be too late to seek help by the time a person realizes something is seriously wrong, or, having been turned away once, some sick patients may second-guess whether they should return to the hospital when they should.

“We want to have a system functioning such that anyone who is sick enough that should be in the hospital is able to find a place in the hospital, and if they are severely ill, to have a bed available in the ICU,” said Dr. Robert Kim-Farley, medical epidemiologist and infectious-diseases expert at the UCLA Fielding School of Public Health.

A study published in the summer in the journal JAMA Internal Medicine found that patients admitted to hospitals with fewer ICU beds had a higher risk of death.

The county memo said the shortages are unlikely to be of tools like ventilators but instead of highly trained staff, specifically respiratory therapists, ICU nurses and critical care physicians. Decisions would be made by an appointed triage officer. For patients who receive a scarce resource, they will be given up to two days to see if it is helping, at which point they should be reassessed to determine whether the treatment should continue.

If the patient has not shown improvement or has gotten worse, the resource may be reallocated to someone else.

“The ethical justification … is that in a public health emergency when there are not enough critical care resources for all, the goal of maximizing population outcomes would be jeopardized if patients who were determined to be unlikely to survive were allowed indefinite use of scarce resources,” the document states.

Meanwhile, patients waiting for these resources may move up in the queue if their condition deteriorates and they are determined to be more in need, according to the guidelines. The decisions will be made by the triage officer and potentially the facility chief executive if there is a dispute.

The chief medical officer of L.A. County’s flagship public hospital warned that although the county has not yet suffered catastrophic consequences, it “is now moving towards becoming the epicenter of the pandemic … and if we don’t stop the spread, our hospitals will be overwhelmed.”

“If you have a heart attack, if you get into a car accident, if you fall off a ladder, or have a stroke, we may not have a bed for you,” said Dr. Brad Spellberg, chief medical officer of L.A. County-USC Medical Center.

He added: “I’m not going to sugarcoat this: We are getting crushed.”

The spring surge in New York overwhelmed the medical infrastructure and caused a huge increase in deaths because some people simply could not get the care they needed. Treatment of COVID-19 has advanced considerably since then, with new procedures that have reduced mortality rates and new drugs that are helpful for the sickest patients. Hospitals have more supplies and have better techniques for increasing the level of oxygen in patients.

The autumn surge, however, has been much worse than anyone imagined in California, caused in part by many Californians deciding they were done with social distancing and mask-wearing guidelines, and ignoring pleas by officials to cancel large Thanksgiving gatherings.

If Californians did stop meeting with other people around the time the new state stay-at-home order went into effect for most of the state just before midnight Dec. 7, the state still could avoid the fate of New York, according to some experts.

Dr. George Rutherford, an epidemiologist and infectious-diseases expert at UC San Francisco, said if Californians are heeding that order, the earliest signs of a leveling off in new daily cases could be seen by Monday and in the days thereafter. “I’d say we have three more weeks of pressure on the hospitals,” Rutherford said. “Hopefully, some of the vaccines can take some of the pressure off from nursing homes.”

Rutherford said he suspects “people are going to do the right thing.” But anything is possible. “What’s gonna happen with Christmas? You saw how convincing we were with Thanksgiving.”

Los Angeles County’s chief medical officer, Dr. Jeffrey Gunzenhauser, said he is closely watching the number of people hospitalized with COVID-19, distraught at the rapid rise. He said he is waiting for the inflection point, the moment when the rate of growth begins to flatten out.

“We have not hit it. It is still picking up faster. The number of people going into the hospitals is pretty much growing more and more every day. It’s not just getting bigger — it’s getting bigger faster,” he said.

On Friday, 87 deaths were reported in L.A. County, which is now averaging 79 deaths a day over the past week, a record and more than double the figure from Thanksgiving.

As of Friday at 9 a.m., fewer than 70 ICU beds were available across L.A. County, a point-in-time daily tally recorded that actually fluctuates from hour to hour, a significant drop from the midmorning tally of about 100 earlier in the week.

Pleas for further reinforcements of additional medical staff desperately needed have so far largely gone unanswered because, as state officials have warned, there is virtually no more extra medical staff available nationwide to help treat the tsunami of COVID-19 hospitalized patients.

California on Friday broke a record for most coronavirus cases in a single day with 53,326, topping the high last set Wednesday, when 52,330 cases were reported, according to The Times’ county-by-county survey. The state is now averaging more than 40,000 new coronavirus cases a day over the last week, a new record and 10 times the figure from Halloween.

The record for the number of Californians hospitalized for COVID-19 has been broken for 20 days in a row, rising to 16,019 by Thursday, including 3,447 people in intensive care units. COVID-19 hospitalizations have multiplied sevenfold since late October.

A doctor at an L.A. County public hospital said this week that there were zero ICU beds left for patients, forcing the hospital to move into surge mode. The hospital was also asking staff to postpone any vacations in the next six weeks, the physician said. The doctor anticipates that deaths will double by January and that the hospital will be treating patients in the hallways with one staff member caring for too many patients.

Most of California bans vacation stays, but travelers, lodgings aren’t in line 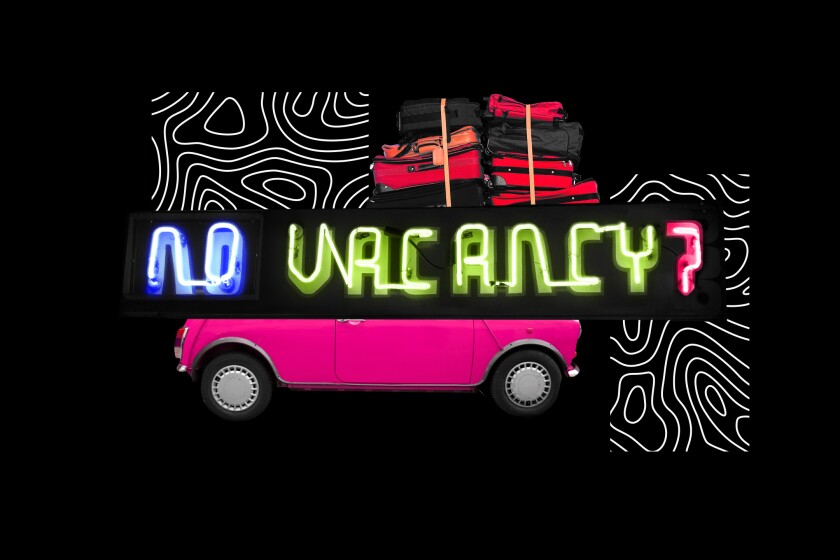 Most of California bans vacation stays, but travelers, lodgings aren’t in line

Some hotels and rental hosts may still be taking bookings that California has banned. Enforcement is a question.

“With the continued rise in cases and the steep slope of the trajectory that shows no sign in bending, we’re essentially screwed,” the doctor said. “We’re afraid that California is heading towards New York spring status at this rate.”

A nurse at a Kaiser Permanente hospital in L.A. County said his facility is rapidly running out of beds, as he and other staff work six days a week to keep up. Patients without COVID-19 are being put wherever possible to make room for the crush of coronavirus patients.

“We are supposed to be getting the vaccine soon, but no word exactly when,” he said. “It is insanely busy and stressful with constant changes day by day.”

[ad_1] Today, Jeff is alive, one of millions of people who have recovered after …