December 03, 2022
Home Health News How The Pandemic Could Hobble The Fight Against AIDS : Goats and Soda – NPR 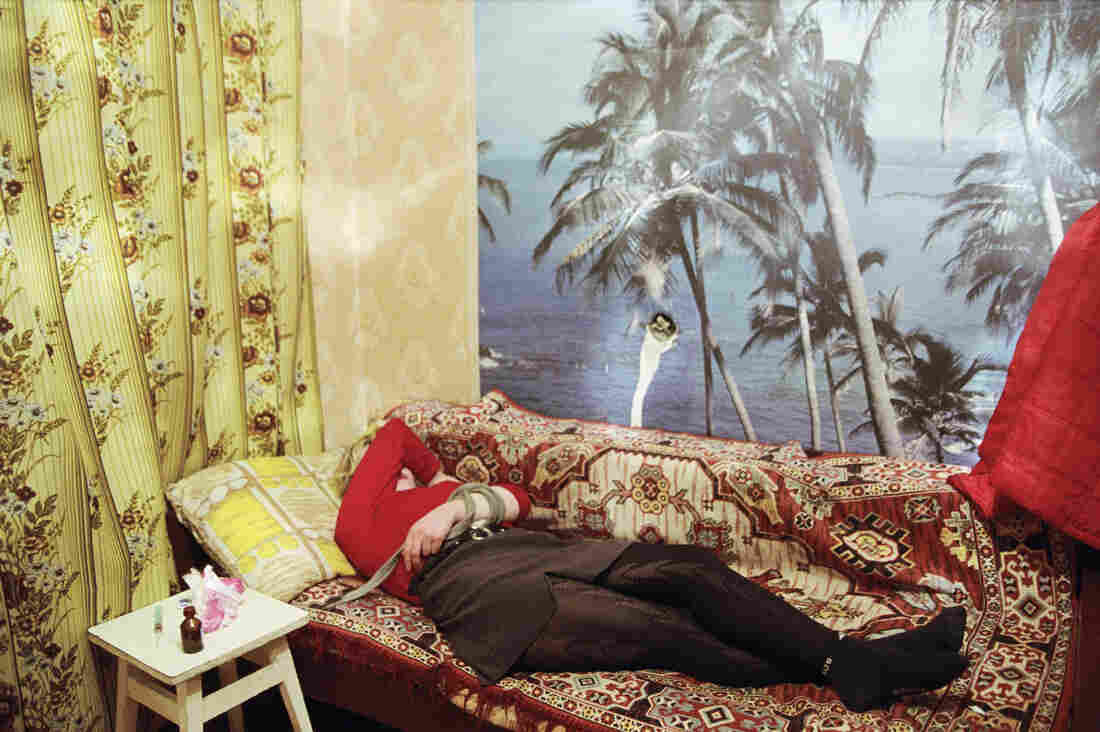 A drug user in a Kyiv apartment. She benefited from a needle exchange program aimed at reducing HIV transmission among intravenous drug users in Ukraine. Participants in such programs face such obstacles as transportation shutdowns and stay-at-home orders during the coronavirus pandemic.

Anton Besenkois worried. He fears all the hard-won progress made in fighting the AIDS epidemic is on a collision course with the urgent needs of the COVID-19 pandemic.

“For people with HIV, it’s double, triple the crisis since the start of the lockdown,” says the Ukrainian AIDS advocate. “I have a bad feeling that organizations and governments are so concentrated on COVID that they are completely forgetting about HIV. For marginalized people, it’s a question of life and death.”

Besenko is no stranger to health crises. After years of injection drug use, he contracted HIV (which he now lives with) and hepatitis C (he’s now cured). He got clean in 2004.

Today, he works for the International HIV/AIDS Alliance Ukraine as a coordinator for harm reduction programs that help IV drug users get clean needles or safer alternative drugs like methadone.

On July 10, he led a session at the 23rd (virtual) International AIDS Conference on the impact of COVID-19 on AIDS.

Suddenly, he and other AIDS advocates, researchers, doctors and patients have a 40-year-old epidemic and a brand new pandemic to worry about. “The concern is that AIDS is already being set back by COVID-19,” says Dr. Monica Gandhi, director of the University of California San Francisco Center for AIDS Research.

At just about the time in January that Gandhi and other scientists, doctors and patient advocates were submitting abstracts for the AIDS conference, ominous reports were coming out of Wuhan, China, that a cluster of pneumonia cases were caused by a novel coronavirus. The disease triggered by the virus became known as COVID-19. Within weeks, it began spreading around the world and just as quickly dominated the world’s attention.

AIDS experts have a litany of fears about how the COVID-19 pandemic could affect continuing progress in the fight against AIDS.

Perhaps the biggest worry is that patients won’t be able to get the AIDS drugs they need because closed borders can interfere with drug shipments; or because quarantines have slowed down work in industries including drug manufacturing; or because economic losses will threaten funding for AIDS prevention programs from some governments.

The drug shortage concern is overriding because, while AIDS pharmaceutical treatment is highly effective, it comes with a catch, says Dr. Roger Shapiro, associate professor of immunology and infectious disease at the Harvard T.H. Chan School of Public Health. Patients on antiretroviral therapy, or ART, must stick to their drug regimen every single day.

But on July 6, WHO reported results of a surveyshowing that 73 countries are at risk of running out of antiretroviral therapy drugs and that 24 countries report critically low supplies.

In the best of circumstances, patients on ART can see the amount of the AIDS virus in their blood go down to levels no longer detectable by tests. Of the world’s nearly 38 million people living with HIV, more than 25 million are on ART, according to the World Health Organization. They can live fairly normal lives and are no longer at risk of spreading the disease, says Shapiro.

But if they stop treatment, the virus will likely mutate in ways that can lead to changes in certain enzymes. The mutated HIV can block AIDS drugs from working against the HIV enzymes they were designed to target. This can happen in a matter of days or weeks. And then, if patients try to restart the same ART regimen it may no longer be effective.

Not only that, if they spread the mutated virus to another person, that person will be infected with the drug-resistant strain of HIV.

“This is the biggest problem with HIV,” says Shapiro. “You need a constant supply of drug. If countries cannot get ART, then that’s when the really dire scenario becomes possible.” It would be like going back to the old days of AIDS, he says, before successful treatment was widely available.

A modeling group set up by WHO and UNAIDS have estimated that if COVID-19-related interruptions in antiretroviral therapy for AIDS patients last for six months, it will result in 500,000 additional deaths in sub-Saharan Africa alone.

It’s not just drugs for treatment that are at risk. The same drugs are used to help prevent infection in people at high risk. Researchers at Fenway Health, a Boston community health center, examined electronic records of its patients in March and April of 2020 and found a drop in the number of people refilling prescriptions for preventive drugs, called PrEP, or pre-exposure prophylaxis. And 72% fewer than expected new patients started PrEP during those two months, probably because people are afraid to go to health care centers, says Gandhi.

That’s bad news, because fewer people at risk of contracting HIV will be taking preventive drugs, says Shapiro. Though there might be a silver lining to lockdown orders and social distancing, he says. “When people are social distancing, there may be less HIV transmission,” he says. “Transmission could decrease when bars are closed. We don’t know yet.”

Different kinds of drugs are needed for a subset of HIV patients — those infected through IV drug use. “Before the epidemic, 220,000 people in Ukraine were on harm reduction strategies,” says Besenko. Those strategies include needle exchange services so IV drug users don’t contract AIDS through contaminated needles or spread the disease if they’re already infected. And they also include substitute drugs, like methadone or buprenorphine that treat opioid addictions.

A host of obstacles could stand in the way of patients getting clean needles or substitute drugs in Ukraine. “Mass transit shut down, routine patient appointments were stopped, at times you could not exit your home at all,” says Besenko.

Experts are also worried that fears of catching COVID-19 are stopping people from getting tested for HIV “In San Francisco, we’re down 90 percent in HIV testing since COVID,” says Gandhi.

“The message to come in early and get tested for HIV has changed. Now, people are told to stay away,” says Gandhi. HIV screening tests were also down in Boston by 85%, according to a study done at the Fenway Institute in March and April 2020 and presented at the AIDS conference.

Some organizations are beginning to help people in low-income countries get tested without risking exposure to COVID-19. “We’ve been active in promoting self-testing in Vietnam, Ukraine, Democratic Republic of Congo, Indonesia, Uganda, Kenya and India,” says Kimberly Green, global director, HIV & TB, of PATH, a non-profit organization that works on global health challenges. “People can go online, order a self-test kit and it’s delivered safely.” After the test, there are people available for them to call for information and support, she says — all without face-to-face contact.

Her organization is also working to increase home delivery of AIDS prevention and treatment drugs in some low-income countries. “Mass transportation was shut down in Kenya and Vietnam, so we set up a courier system to deliver ART,” says Green.

The ability of the world to mobilize quickly in the fight against COVID-19 owes a lot to the groundwork laid in the fight against HIV, said Dr. Deborah Brix, U.S. Global AIDS Coordinator and U.S. Special Representative for Global Health Diplomacy. She is a member of the White House Coronavirus Task Force. “It’s the platforms that we’ve built together and the relationships that are going to be our solutions not only for HIV but our response to COVID-19 around the world,” she said in remarks at the virtual AIDS conference.

COVID-19 is not the world’s first pandemic, and the global response to it owes a lot to what the world learned from AIDS.

“HIV taught us how to do clinical trials in the middle of a pandemic with a new urgency,” Shapiro says. “I believe Tony Fauci [director of the National Institute of Allergy and Infectious Diseases and a member of the White House Coronavirus Task Force] thinks about that everyday when thinking about how fast he can push the vaccine trials but still be sure they’re of good scientific quality. The people leading the vaccine efforts for COVID, including Dr. Fauci, cut their teeth in HIV.”

Susan Brink is a freelance writer who covers health and medicine. She is the author of The Fourth Trimester and co-author of A Change of Heart.

[ad_1] Shipments of the first COVID-19 vaccine could arrive in Minnesota next week, and …