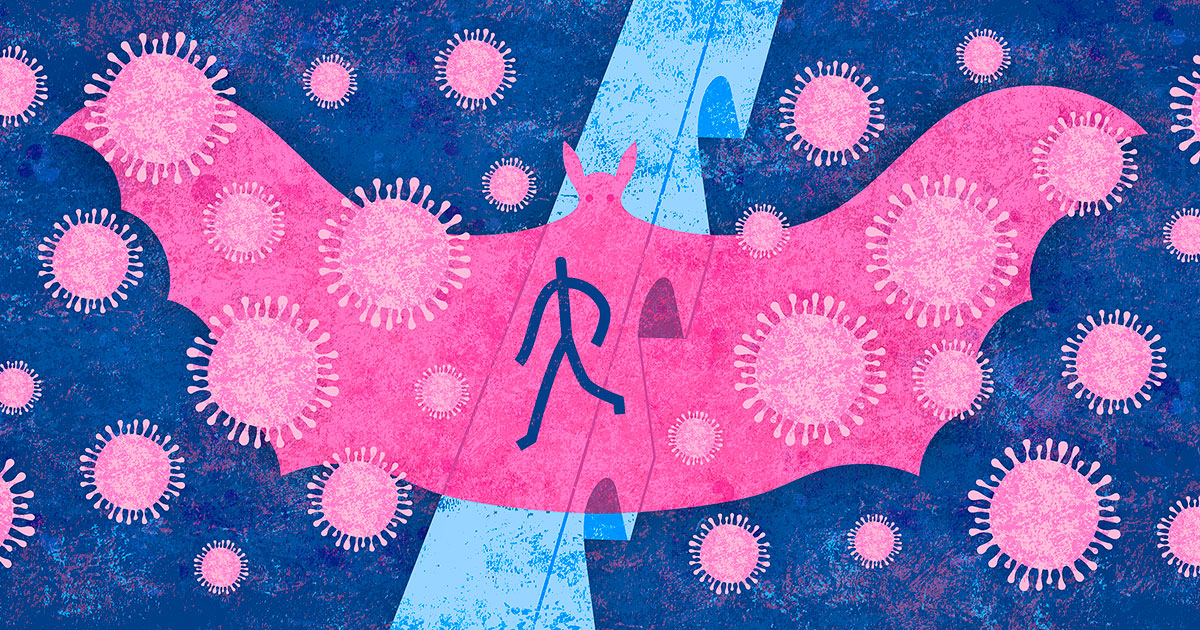 China is in the midst of an epidemic caused by an emergent strain of coronavirus. The World Health Organization formally named the disease COVID-19, and the Coronavirus Study Group named the underlying virus severe acute respiratory syndrome coronavirus 2, or SARS-CoV-2. A cluster of unusual pneumonia patients was first detected in late December, and the novel coronavirus was officially identified as the reason on January 8. To date, it has caused over 78,000 confirmed cases and 2,445 confirmed deaths, primarily in the Hubei province of China. It has spread to 29 countries or territories so far, including the United States, which has 14 diagnosed cases, and an additional 21 cases in individuals who were flown back to the U.S. after infection. One U.S. citizen has died of the virus in Wuhan, China. Naturally, the disease has left a lot of questions in its wake.

Yes. In fact, SARS-CoV-2 is the third pathogenic novel coronavirus to emerge over the past two decades. The first, discovered in 2003 and named SARS-CoV, caused SARS, a serious and atypical pneumonia. The second, MERS-CoV, emerged a decade later in the Middle East and caused a similar respiratory ailment called Middle East respiratory syndrome (MERS). Since its identification, 2,494 cases of MERS-CoV infection and nearly 900 deaths have been documented. The SARS-CoV epidemic proved larger but less deadly, with approximately 8,000 cases and nearly 800 deaths.

Where do these viruses come from?

MERS-CoV and SARS-CoV appear to originate in animals, and the same is likely true of SARS-CoV-2. This makes them zoonoses, diseases that can jump between humans and other animals. MERS-CoV and SARS-CoV were originally bat viruses that spread to an intermediate animal (camel and civet cat, respectively), which then exposed humans to the viruses. Genetic analysis of SARS-CoV-2 sequences shows that their closest genetic relatives appear to be bat coronaviruses, with the role of intermediate species possibly played by the pangolin, an endangered species trafficked in China for its scales and meat. There are four coronaviruses that cause colds in humans — known as HCoV-229E, HCoV-NL63, HCoV-OC43 and HCoV-HKU1 — and these also seem to have zoonotic origins.

How do these viruses accomplish these inter-species jumps?

While the specifics differ, the mechanism relies on the same fundamental premise: access and ability. Can a virus reach the cells of its host? And can the virus’s proteins recognize and bind to structures, known as receptors, on those cells? If so, that’s all it takes — the virus can now enter the cell and begin to replicate, infecting the host.

Coronaviruses have become quite adept at figuring out how to use these receptors to gain entry to their host’s cells. The viruses use a surface glycoprotein — a protein with sugars attached — called the spike (S) protein to bind to host cells. (This protein gives the virus a crownlike appearance, which is where the “corona” in its name comes from.) The part of the protein that does the actual binding, called the S1 subunit, can vary considerably, allowing the virus to bind to many different mammalian host species.

Most coronaviruses that infect humans appear to latch onto one of three specific host receptors on mammalian cells. SARS-CoV and NL63 use a human receptor called angiotensin-converting enzyme 2 (ACE2), MERS uses dipeptidyl peptidase 4 (DDP-4), and 229E uses aminopeptidase N (APN). These proteins are all present on epithelial, or surface, cells of the human airway, presenting easy targets to any airborne virus. Two recent studies of SARS-CoV-2 suggest that, like SARS-CoV, it uses ACE2 as a receptor.

Any other zoonoses we should worry about?

While it isn’t necessarily a cause for worry, there is another virus that commonly emerges from animal reservoirs: influenza. Almost all known influenza viruses originate in waterfowl such as ducks, geese, terns, gulls and related species. Many viruses move from birds into other species (including humans). Often, the new species is a dead end; the avian influenza virus can jump from birds to humans, for instance, but not between humans. But occasionally, a novel virus can also spread efficiently among people. We saw this most recently in 2009 with H1N1, a swine virus that spread among humans, eventually causing a pandemic. And an avian H1N1 virus was responsible for the global pandemic of 1918.

To gain access to a host’s cells, influenza uses its own viral glycoprotein, hemagglutinin (H). Like the coronavirus spike protein, H is a spiky-looking surface protein that sticks out from the virus. It binds to cells in the upper respiratory tract that have sialic acid residues — sugar chains attached to the ends of proteins and lipids. These sialic acids can come in different forms, with different types of linkages (ways that the atoms of the sialic acid bind to the sugar). Avian influenzas prefer a linkage known as an α2,3 linkage, in which the sialic acid binds to the sugar galactose via a specific carbon atom. This type of linkage makes the sialic acid and galactose stick straight up. Human-adapted influenza viruses seem to prefer an α2,6 linkage, which uses a different carbon atom and has a more bent appearance. This sialic acid preference is thought to be the major factor in determining which species a virus can infect, and it limits the ability of purely avian influenza viruses to infect and spread in human populations.

What other factors influence which animal diseases can jump to humans?

Recent work has shown that the host-virus interaction can also be modified by host proteases — enzymes that break down proteins — so it is not solely the makeup of the spike protein that determines which hosts are vulnerable to which viruses. These proteases can cut parts of the spike protein and alter how it binds to host cells, so viruses that normally might not infect human cells can do so after a protease treatment.

The role of intermediate species may also be more complex than scientists thought at first. Researchers initially suspected that such species were necessary for coronaviruses to move from the primary reservoir species into humans. Perhaps the virus evolved and adapted to the intermediate species, making it more efficient at binding to human cells. However, recent studies have shown that some bat coronaviruses can infect human cells without passing through an intermediate host — meaning a significant reservoir of undiscovered coronaviruses may lurk out there. Similarly, we once believed pigs might serve as a “mixing vessel” where avian influenza strains would become better adapted to mammals, since pigs seem to have both α2,3- and α2,6-linked sialic acids on the cells of their trachea, allowing human and bird strains to mix and produce novel human-adapted viruses. But while pigs may serve this function, we now know that such mixing is not required, and that avian viruses can infect humans without a pig intermediate.

Both virus species thus present an ongoing challenge due to their diversity and their proclivity for jumping hosts. In fact, that diversity likely allows these jumps in the first place, since a large, diverse population may be more likely to contain viruses that can bind to a variety of host receptors than a more homogeneous population. Because of this, coronaviruses and influenza both have pandemic potential.

What can we do to protect ourselves?

First of all, keep yourself safe by washing your hands, and avoid touching your face and eyes — practices that help avoid infection with either virus. You can catch a virus by directly breathing in virus-laden droplets in the air or by touching contaminated surfaces and then infecting your nose and eyes, whose mucous membranes serve as entry sites.

Researchers develop flu vaccines every year, and scientists are working toward that holy grail of influenza research, a universal vaccine that protects against all strains of the virus. With coronavirus, we’re not quite as far along. The sporadic nature of serious outbreaks means funding and expertise are minimal. A number of laboratories are currently devising a SARS-CoV-2 vaccine, but it takes time to carry out animal and human clinical testing.

Researchers will also continue their surveillance of emerging influenza and coronaviruses, examining their genomes for hallmarks of adaptation to humans. We may have been too late to catch SARS-CoV-2, but we can still prepare for the next one.