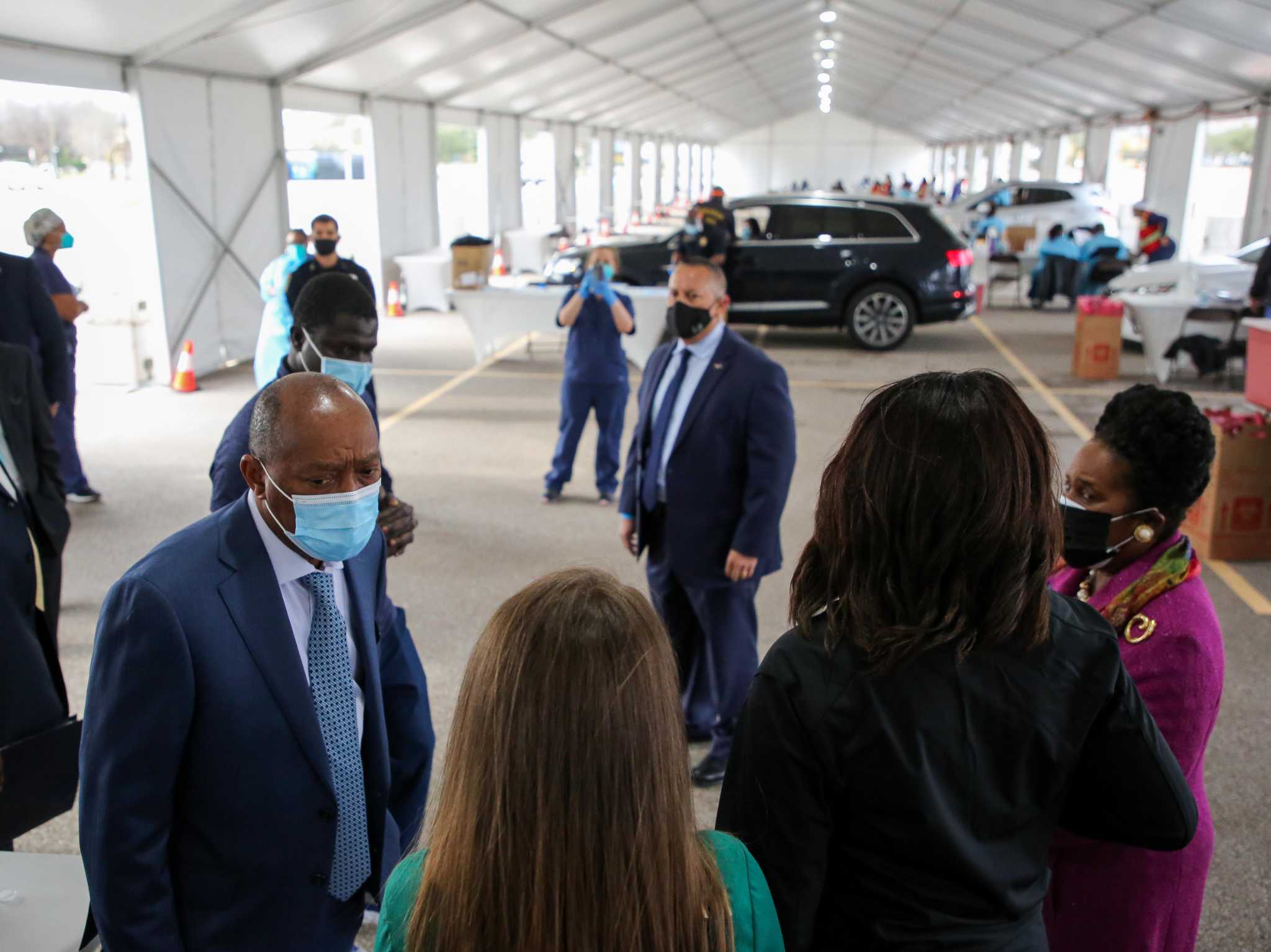 The city will ditch mega COVID-19 vaccine sites for smaller, more efficient clinics until the supply coming from the federal and state governments significantly increases, Mayor Sylvester Turner said Monday as local leaders adjust their strategies to get shots in residents’ arms as quickly as possible.

Turner toured a new drive-thru site the city set up Monday at Delmar Stadium with United Memorial Medical Center, where health workers will aim to inoculate 1,000 people a day. The city was able to vaccinate some 6,100 people when it last held a mega clinic at Minute Maid Park on Jan. 16, but the operation led to long wait times and other logistical hurdles.

The Delmar site allows for shorter wait times and represents “a smoother way to go” while the city only receives about 9,000 doses per week, Turner said.

“Until the supply exponentially increases, we decided to kind of stand down from that for the time being,” Turner said of the mega sites. “It was creating more inconvenience to set up that bigger site and have a lot of people go through, and then you have those standing wait times and what have you. This is just a better way to go.”

Meanwhile, Harris County announced it would launch a new waiting list for the vaccine Tuesday, instead of doling out appointments on a first-come, first-served basis. The change aims to make signing up easier and more equitable for residents not accustomed to reacting speedily on computers or mobile phones when health agencies announce the availability of limited numbers of new vaccination appointments.

Older residents will be made a priority, and the county’s system will randomly choose recipients for appointments, health officials said. The county then will reach out only to those select individuals when new appointments become available, avoiding a scramble for the slots.

“Let me put it bluntly: Getting the COVID-19 vaccine shouldn’t be like the ‘Hunger Games,’” County Judge Lina Hidalgo said. “It shouldn’t be about who can hit refresh on a browser the fastest.”

Houston is not adopting a similar enrollment program, though leaders said seniors are eligible for a waiting list to get city appointments as well. Turner said no one strategy will be able to make up for the limited supply of vaccine.

“The flip side of that: You could establish a wait list, and you could have 100,000 people on your wait list,” Turner said. “The question people will be asking is, ‘When will we get it?’ Let’s say their time could be some time in February, or March, but people don’t want to wait that long. It just varies.”

How do I sign up for a COVID-19 vaccine?

Houston: No appointments currently are available. To get email or text notifications when new appointments become available, sign up for the HoustonRecovers options at houstonemergency.org/alerts. Seniors may also call 832-393-4301 to get on a waiting list.

Harris County: Beginning Tuesday, register at readyharris.org or call (832) 927-8787 to get on the waiting list.

The city and county have said they will not turn away non-residents.

No appointments currently are available for city clinics. The Health Department has been opening new appointment slots often on Friday afternoons, and they are claimed within minutes. Residents can get text and email notifications about new appointments by signing up for the “HoustonRecovers” option at houstonemergency.org/alerts.

Seniors also may call the Harris County Area Agency on Aging at 832-393-4301 to get on the city’s waiting list. When the city opens new appointments, it will reserve a certain number of slots for those people.

The city and county have said they will not turn away non-residents.

Appointments have been hard to come by for most, an indication that the supply of vaccine pales in comparison to overwhelming demand.

The city and county clinics make up only a small part of the region’s vaccination campaign, with hospitals, pharmacies and medical providers playing more significant roles.

Houston has given roughly 31,000 shots and Harris County 27,000. That accounts for about 14 percent of the 408,671 doses given out in Harris County, according to a Chronicle analysis of data from the Texas Department of State Health Services.

Texas remains in Phase 1B of its vaccine distribution plan. That means eligible residents are limited to front-line workers, people 65 and older, and those with certain high-risk medical conditions.

As of Monday, the Houston region has had 452,585 cases of COVID-19 and 5,577 deaths. The city reported Monday its largest-ever number of cases in one day, 3,039, though Turner said that was due mostly to system corrections.

The statewide positive test rate for COVID-19 infections stood at 14.75 percent, down from 16.57 percent on Friday.

Stephanie Lamm contributed to this report.