January 29, 2023
Home Health News Half of US states are reporting increased Covid-19 cases and some leaders push new measures – CNN 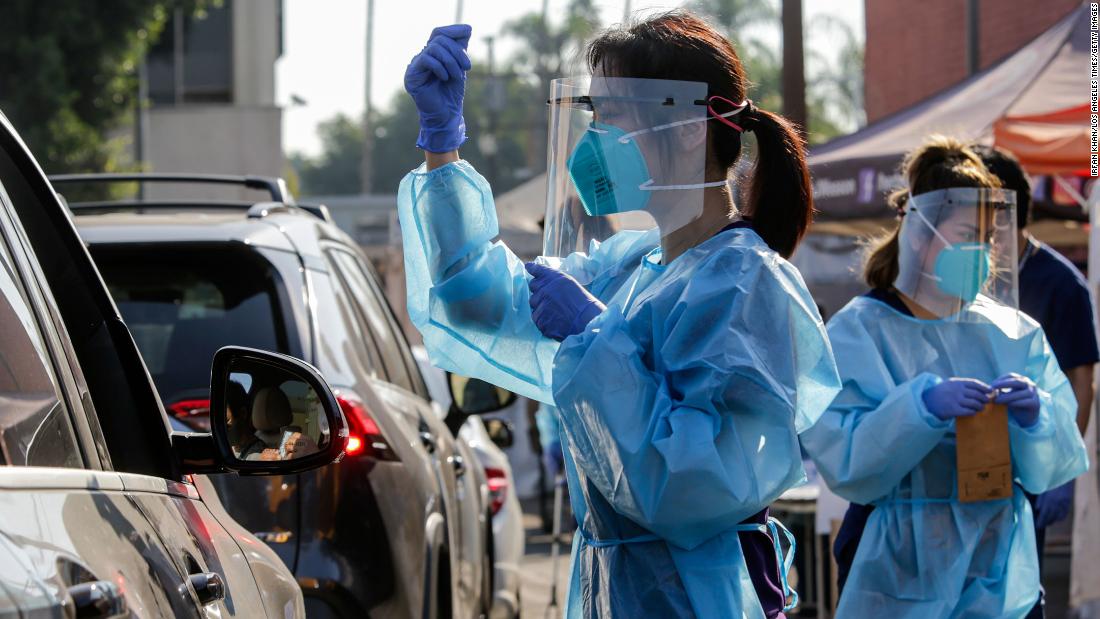 Wisconsin issued an emergency order Tuesday limiting public gatherings to no more than 25% of a room or building’s total occupancy, the governor’s office said.
“We’re in a crisis right now and need to immediately change our behavior to save lives,” Gov. Tony Evers said in a statement.
Evers’ response follows grave milestones for his state: Wisconsin reported its highest daily cases, highest death toll and record-high hospitalizations in the past days.
Meanwhile in Kentucky, which Gov. Andy Beshear says is seeing the third major escalation of Covid-19 cases, authorities were instructed to step up mask enforcement.
“I have seen some things floating around about how we can’t enforce this because it’s an executive order,” the governor said. “They have the force of law [under] Kentucky statute.”
In New York, officials have reported several clusters of Covid-19 cases and the governor laid out a new plan this week on how the affected communities will move forward.
Areas where clusters are occurring will have to close schools and essential businesses except for take-out dining, limit gatherings at houses of worship to 25% with a maximum of 10 people and prohibit mass gatherings, the governor said.
The announcements are the first sign of tightening restrictions across the country as the US approaches a season experts have warned will be challenging — and deadly.

Kentucky and New York are among the 25 states reporting more new cases than the previous week.
Alaska and Montana reported record-high daily case counts this week. In Ohio, the governor said new cases are “trending upward.”
At least a dozen states reported more than 1,000 new cases Monday. Four of them — California, North Carolina, Tennessee and Texas — had more than 2,000 infections.
Across the US, only three states report a decline in cases — Hawaii, Iowa and South Carolina.
“Instead of going into the fall and the winter on a sharp decline down to a low baseline, we’re actually going into the fall and the winter with some parts of the country ticking up, which will ultimately lead to not only more infections, but more hospitalizations and then community spread, which will ultimately lead to morbidity and mortality,” Dr. Anthony Fauci told students at American University this week.
Experts have warned the rise in cases will be followed by an uptick in hospitalizations and deaths. Researchers with the University of Washington’s Institute for Health Metrics and Evaluation project the US could see more than 2,900 deaths each day by January. And in total, more than 360,000 Americans could be killed by the virus by the new year.
So far, more than 7.5 million infections have been reported — more than any other country. More than 210,900 Americans have died, according to Johns Hopkins University.

Meanwhile, as health officials track the spread of the virus, many continue to research its effects on the body.
A new study suggests neurological symptoms occur in most hospitalized Covid-19 patients.
The study “highlights the high frequency and range of neurologic manifestations, which occurred in more than four fifths of Covid‐19 patients hospitalized in our hospital network system,” the researchers wrote in the study, published in the journal Annals of Clinical and Translational Neurology on Monday.
The researchers, from Northwestern University Feinberg School of Medicine, found that at any time during the course of their Covid-19 illness, 82% of the patients who were studied had neurological symptoms such as headaches or encephalopathy, altered brain function or structure.
Researchers also found patients with any neurological symptoms tended to be younger than those without.
“The fact that any neurologic manifestations as a whole were more likely to occur in younger people is surprising, and could potentially be explained by greater clinical emphasis on the risk of respiratory failure than other symptoms in older patients,” the researchers wrote in their study. “In contrast, encephalopathy was more frequent in older patients.”

The US Food and Drug Administration also issued guidance Tuesday for companies hoping to get emergency use authorization (EUA) for a Covid-19 vaccine.
The FDA said companies will have to include at least two months of follow-up after volunteers get their second dose of the vaccine. That would mean no company could seek an EUA before mid-November, because the vaccines furthest along in clinical trials — those made by Pfizer and Moderna — both require waiting either 21 or 28 days between doses.
“Being open and clear about the circumstances under which the issuance of an emergency use authorization for a COVID-19 vaccine would be appropriate is critical to building public confidence and ensuring the use of COVID-19 vaccines once available,” said Dr. Peter Marks, who directs the FDA’s Center for Biologics Evaluation and Research.
The guidance comes weeks after a poll found the majority of Americans believed political pressure would cause the FDA to rush a Covid-19 vaccine. But health officials have forcefully pushed back saying science will be what leads the way.
Fauci said earlier this week it’s likely US health officials will know whether a vaccine is safe and effective as early as next month.
“I think comfortably around November or December, we’ll know whether or not the vaccine is safe and effective,” he said.

[ad_1] Anita Herbert stunned many of her 2.4 million Instagram followers on Monday, December …