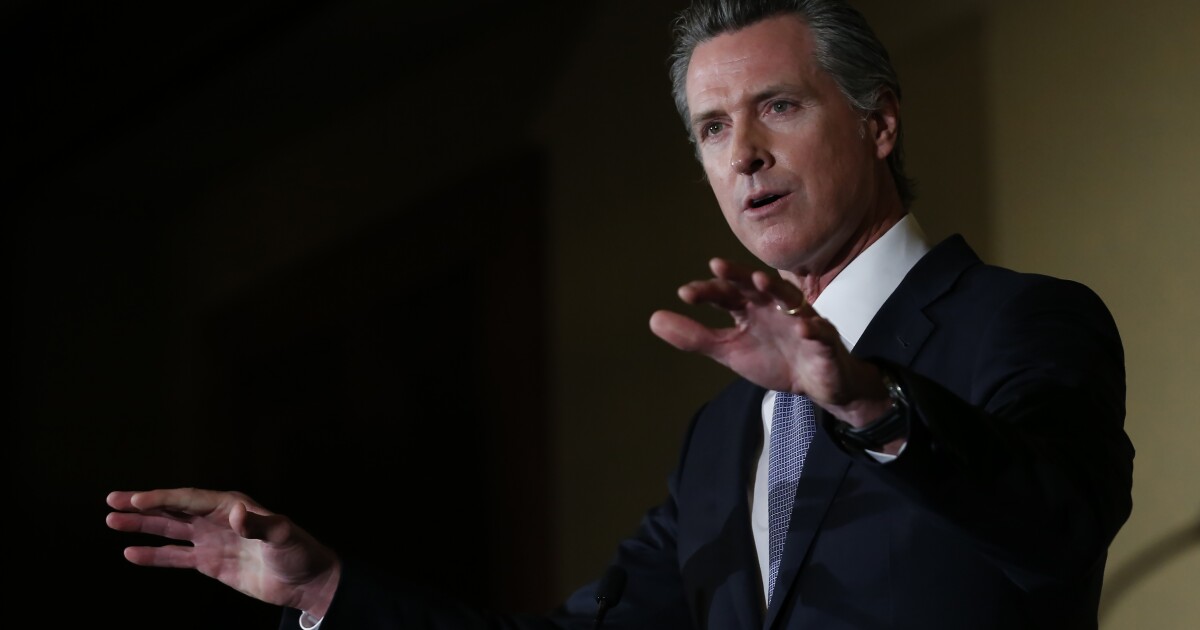 “We are currently in deep partnership with the CDC on one overriding protocol that drives our principal focus right now, and that’s testing,” Newsom said, calling expanded testing “our top priority, not just in the state of California but, I imagine, across the United States.”

Such an expansion includes both broadening the criteria that a person must meet to be tested for COVID-19, as well as getting more coronavirus test kits sent to California, he said. The state has 200 kits for both diagnostic and surveillance purposes, but federal officials say more will arrive in the coming days, he said.

In his first news conference to address the coronavirus issue, the governor sought to calm concerns and reassure Californians that the state will be prepared if the virus spreads. Despite two communities having declared local emergencies over the outbreak, Newsom said there are currently no plans to declare a statewide emergency.

“We’re meeting this moment,” Newsom said. “We have been in constant contact with federal agencies. We have history and expertise in this space. We are not overreacting, but nor are we underreacting to the understandable anxiety that many people have as it relates to this novel virus.”

The announcement comes after a Solano County woman became the country’s first coronavirus case in a patient who neither recently traveled out of the country nor was in contact with someone who did, raising the possibility that the virus is already spreading within the community. The woman was not tested for several days until after she was hospitalized because she did not fit the Centers for Disease Control and Prevention criteria, which include both symptoms of the virus and either a recent history of travel to China or close contact with another coronavirus patient.

The case demonstrates the need for more rapid testing of all coronavirus patients, Sen. Dianne Feinstein (D-Calif.) wrote Thursday in a letter to Vice President Mike Pence, who has been appointed the Trump administration’s coronavirus czar.

“I understand the newly diagnosed patient was not tested immediately for coronavirus, despite the request by her attending physicians at the University of California-Davis Medical Center,” she wrote. “It is unclear whether the delay was caused by overly restrictive CDC testing criteria or whether the CDC was unable to process the diagnostic test faster.”

A total of 33 people have been diagnosed with coronavirus in California, and five have since left the state, Newsom said. Of the confirmed cases, 24 were either evacuated from the Diamond Princess cruise ship or returned on repatriation flights from Wuhan, China — the epicenter of the coronavirus outbreak.

Newsom said more than 8,400 people are being monitored in 49 local jurisdictions.

The state is “doing those protocols and monitoring as it relates to more traditional commercial flights that came in from points of concern and potential points of contact, particularly in Asia,” he said.

COVID-19 has infected more than 80,000 people in about three dozen countries since it was discovered in late December. More than 2,700 have died, most of them in mainland China.

There are currently 60 confirmed cases in the United States, and officials continue to stress that the risk to the general public remains low. Still, they are warning people to be prepared to see more U.S. cases.

“Ultimately, we expect we will see coronavirus spread in this country,” CDC Director Nancy Messonnier said Tuesday. “It’s not so much a question of if, but a question of when.”

The warnings already are scaring away visitors to California. On Thursday, Microsoft and Epic Games announced they were pulling out of next month’s Game Developers Conference in San Francisco.

Facebook also announced it has canceled the in-person portion of its annual F8 software developer conference, which was scheduled to take place May 5-6 in San Jose.

UC Davis officials said the Solano County coronavirus patient arrived at its medical center from another hospital Feb. 19 but was not tested until Sunday. The hospital said that precautions had been put in place because of healthcare workers’ concerns about the patient’s condition, but that it has asked a “small number” of employees to stay home and monitor their temperature.

The woman was “in her community” for a number of days before accessing care, California Health and Human Services Agency Secretary Dr. Mark Ghaly said Thursday.

Investigators are now working to find and contact any individuals who may have come in contact with the woman. The CDC has sent 10 staffers to help trace her contacts, Newsom said.

Sacramento County health officials said that dozens of people might be quarantined at home based on contact with the woman. UC Davis spokesman Steve Telliano disputed that the number could be higher than 70, but refused to say if more or fewer people were quarantined.

Sacramento County Director of Health Services Peter Beileson said the patient had been transferred to the hospital with virus containment protocols, but additional measures, such as isolation in a negative pressure room, which prevents air from escaping, were now in place. Beileson said he did not expect additional cases of the virus based on those in contact with the patient in Sacramento, where she is receiving treatment, but did expect more cases in Solano County, where she is from.

Solano County is also home to Travis Air Force Base, where several hundred people were quarantined after returning on repatriation flights from Wuhan and the Diamond Princess cruise ship in Japan. Multiple positive coronavirus cases have been reported among those groups. But Dr. Sonia Angell, director of the California Department of Public Health, said there is no evidence of a connection between the woman and the returning travelers.

Newsom said the state expected that the virus would transmit within the community.

“What happened in Solano County did not surprise anybody,” Newsom said. “I think the only thing … that surprised folks was it didn’t happen sooner.”

On Thursday, Solano County announced that it had issued a proclamation of local emergency due to the virus.

“We are taking this situation seriously and are taking steps necessary to protect the health and safety of Solano County residents,” Dr. Bela Matyas, Solano County health officer, said in a statement. “It is important to recognize that we have moved from containment to mitigation. We are investigating potential exposures and ensuring that proper evaluation and care are provided if they become sick.”

The county has activated its Department Operations Center to bolster its efforts in identifying, screening and contacting people who were exposed to the virus. The declaration allows the county to better collaborate with local, state and federal agencies to implement containment efforts, officials said.

Some other local governments have also declared states of emergency amid coronavirus fears, including Santa Clara County on Feb. 10, San Diego County last week, San Francisco on Tuesday and Orange County on Wednesday.

Such a declaration creates a mechanism for officials to ask for mutual aid from state and federal partners in the event that resources are exhausted, Orange County health officer Nichole Quick said Wednesday.

There is no defined criteria, such as a certain number of coronavirus cases, for what merits an emergency declaration, said L.A. City emergency management department General Manager Aram Sahakian in a meeting with City Council members on Wednesday.

“If the core group preparing for this incident feels and sees the need for additional resources and additional multiagency coordination, they can pull the trigger on it,” he said. “It doesn’t mean it’s out of control. It doesn’t mean we’re going to panic.”

The last time L.A. County declared a public health emergency was in 2017 during a Hepatitis A outbreak.

The Hepatitis A outbreak required extraordinary measures because the disease was difficult to contain and required widespread vaccination efforts, said L.A. County health department epidemiologist Dr. Prabhu Gounder in a meeting with City Council members on Wednesday. California officials declared a state of emergency at that time as well.

“At the time, there was a shortage of Hepatitis A vaccine. We would not have been able to get this additional vaccine for the response without the state declaration,” Gounder said.