The combined 189 boxes of vaccine vials are expected to arrive in all 50 states on Monday, and another 3,900 vials are expected to ship later Sunday to United States territories. In addition, 400 boxes packed with about 390,000 vials will ship Monday to arrive on Tuesday.
The landmark moment in the pandemic comes after the vaccine received the US Food and Drug Administration’s emergency use authorization, and in the coming days, the vaccines will arrive to hundreds of facilities across the US.
“We expect 145 sites across all the states to receive the vaccine on Monday, another 425 sites on Tuesday, and the final 66 sites on Wednesday, which will complete the initial delivery of the Pfizer orders for the vaccine,” said Gen. Gustave Perna, chief operating officer of the federal government’s vaccine initiative Operation Warp Speed. 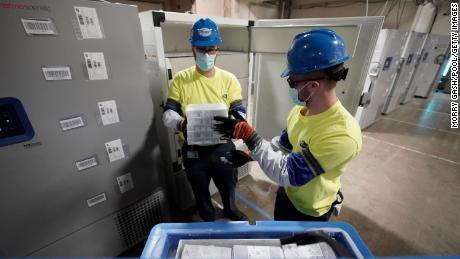 The FDA granted approval Friday for the drug company’s Covid-19 vaccine candidate, and the US Centers for Disease Control and Prevention’s Advisory Committee on Immunization Practices (ACIP) voted on Saturday to recommend it for people age 16 and older in the US.
CDC Director Dr. Robert Redfield must accept the ACIP recommendation before vaccinations can begin. The CDC vaccine advisory committee also recommended that health care workers and long-term care facility residents be first in line to receive the shot. 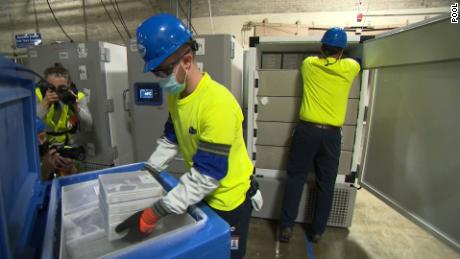 The vaccine arrives at a critical moment for the US. Hospitalizations due to Covid-19 hit record highs for the seventh day in a row Saturday, and with the winter holidays still ahead, experts warn that the pandemic could continue to get worse before the larger public receives the vaccination. 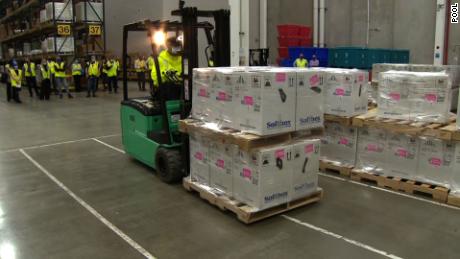 Experts including FDA Commissioner Dr. Stephen Hahn and members of the CDC’s ACIP have said they have faith in the evaluation of the vaccine.
“I do believe that the process that we have used here in the ACIP to reach this decision is transparent, is science based, keeps equity in mind and is, for this moment, the absolute best that we can do,” said ACIP member Dr. Beth Bell, a clinical professor of global health at the University of Washington.
American Medical Association President Dr. Susan Bailey said in a statement Saturday the biggest obstacle to the vaccine is people’s willingness to be vaccinated.
“To be clear, these vaccines will reduce death and severe illness. They have been rigorously evaluated, and if enough of us roll up our sleeves and get vaccinated, we can eventually reclaim normalcy,” she said.
Advisers to the CDC have recommended that health care workers and long-term care facility residents be first in line to get the injection.

Surge on top of surge

Most Americans will have to wait months before they can get the vaccine, and until then many states are experiencing unprecedented numbers of new infections.
Arizona reported its second highest number of new cases Saturday with 8,076, and reached a new record positivity rate at 25%, indicating that the viral transmission is increasing faster than the case counts indicate, according to an ongoing study by the University of Arizona’s Zuckerman College of Public Health.
The California Department of Public Health (CDPH) reported 35,729 new coronavirus cases on Saturday, breaking the previous record set on Friday of 35,468 new cases.
And for three days in a row, Florida has reported more than 10,000 cases a day, a CNN tally shows.
With the fallout of Thanksgiving travel and gatherings still unfolding, health officials warn the impacts to communities could soon get worse.
Los Angeles County Public Health Director Barbara Ferrer issued a grim warning about the coming weeks, after announcing Friday that the county has doubled its number of daily new cases in about 10 days.
“The issue right now is what we call the Thanksgiving surge,” Ferrer said. “We had a surge, and now we have a surge on top of a surge, and it’s really hard for us to calculate exactly what we’re going to see in the next week or two.”
“We’re on a very dangerous track to see unprecedented and catastrophic suffering and death here in L.A. County if we can’t stop the surge,” Ferrer said.

Overburdened hospitals across the US

The average number of new daily cases over the last week was 210,764, another pandemic high, according to a CNN analysis of Johns Hopkins data.
Hospitals in nearly every corner of the country have felt the impact. Data from the Department of Health and Human Services shows more than 85% of hospitals nationwide had more Covid-19 patients last week than they did a month ago and overall, about one in five hospital inpatients were confirmed to have Covid-19 last week — nearly double the number from a month earlier.
In the country’s 10 largest cities, the share of hospital patients who had the virus ranged from about 9% in New York to 23% in Chicago. In El Paso, Texas, more than 50% of patients in city hospitals had Covid-19 between November 27 and December 3. That’s nearly double the national average for that period.
As of Saturday, there were more than 13,000 Covid-19 patients in California hospitals, a record for the state and a 3.5% increase compared to the day before, according to the California Department of Public Health. The state also reported a record 35,729 new cases.