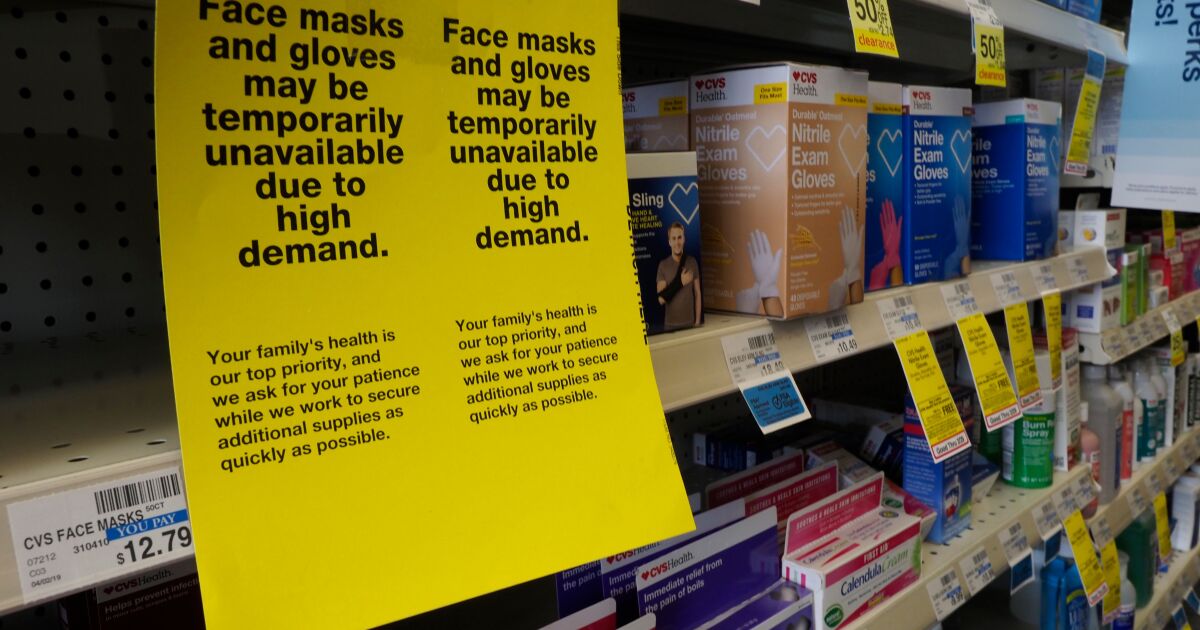 Get up to speed with our Essential California newsletter, sent six days a week.

You may occasionally receive promotional content from the Los Angeles Times.

Standing in a state Capitol media briefing room flanked by health officials, Gov. Gavin Newsom officially declared a state of emergency in California over the novel coronavirus on Wednesday afternoon. The governor’s declaration came hours after California had announced its first death from the illness, which has now been reported in 12 counties in the state and sickened more than 50 people.

The first coronavirus death in the state occurred in Placer County. The individual, whose name has not been released, was a 71-year-old man with multiple underlying medical conditions. He first developed symptoms while on a Princess cruise from San Francisco to Mexico that returned to San Francisco on Feb. 21. He was hospitalized in Roseville last Thursday and tested for COVID-19 on Sunday. The results came back positive on Tuesday, and he died the next morning.

[Read the story: “What we know about the first Californian to die from coronavirus” in the Los Angeles Times]

Princess Cruises said it was notified by the Centers for Disease Control and Prevention that they are investigating a small cluster of coronavirus cases in Northern California among individuals who were also on that cruise to Mexico, which ran from Feb. 11 to Feb. 21.

It’s possible that other cruise passengers may have been exposed, officials said. Placer County Public Health is working closely with Sacramento County Public Health and the U.S. Centers for Disease Control and Prevention to identify and contact other cruise passengers. By one estimate, more than 50% of the roughly 2,500 passengers who traveled from San Francisco to Mexico and back on the cruise ship with the Placer County victim are Californians, Newsom said.

But Newsom said he felt confident that the state could contain the spread of the virus by passengers of the cruise who had already returned to California. “We have the resources,” Newsom said. “We have the capacity. By this evening, we will have contacted every county health official that has someone who came off this cruise. They will have their contact information and begin a process to contact those individuals.”

All of this brings us back to the Grand Princess — that 17-deck cruise ship, which you’ll probably be hearing a lot more about in the coming days. After most of the passengers disembarked in San Francisco, the Grand Princess embarked on its next voyage, a 15-day trip to Hawaii. But not all the passengers got off in San Francisco: Sixty-two passengers from the Mexico trip remained aboard for the next leg of the cruise.

That voyage has since been cut short, and the ship is headed back to the California coast, where it will be held offshore after it arrives.

In an abundance of caution, the 62 guests who were also aboard for the previous leg of the trip, along with other possible close crew contacts, have been asked to remain in their staterooms until screened by the ship’s medical team. Several passengers and staff aboard the ship have exhibited possible coronavirus symptoms.

“The ship will not come on shore until we appropriately assess the passengers,” the governor said Wednesday. The governor said that public health officials plan to airlift test kits to the ship to test passengers.

More on the coronavirus

Coronavirus today: Get the latest coronavirus updates from our staff in California and around the world.

Inadequate staffing, poor communications and balky technology turned election day in Los Angeles County into an anxious quagmire for many voters. Their complaints triggered calls by one member of the Board of Supervisors for a “forensic autopsy” on what went wrong. Los Angeles Times

An expert tip for amateur pundits watching the local L.A. County races: Vote counts in many down-ballot races are far from final. But if you want to see the latest L.A. County results as they roll in, bookmark this live county primary results page from our data team. Local election officials will be releasing updated totals through Friday (the releases will switch to twice a week after that), and those updates will automatically populate on our results page.

After 80 years, Art’s Famous Chili Dogs will close this weekend. The final day of service at the legendary South L.A. spot is this coming Sunday, March 8, beginning at 10 a.m. Expect the stand to close up by 5:30 p.m., if not before. Eater LA

Curious how your neighborhood voted in the California Democratic primary? As results trickle in, The Times is assembling the most complete map possible of block-by-block results from the state’s 58 counties. Los Angeles Times

Weeks before his sentencing, former Rep. Duncan Hunter filed court papers asking a second time for a judge to throw out the indictment against him — or recuse prosecutors from the case in light of new evidence that Hunter says indicates a conflict of interest. Los Angeles Times

HEALTH AND THE ENVIRONMENT

San Diego faces critical earthquake danger from a fault long believed to be inactive: The conventional thinking has long been that the San Diego region faces less danger from a devastating earthquake than the Los Angeles or San Francisco areas. But a new landmark study shows how a fault running through the heart of San Diego poses a much more serious threat than believed a generation ago. Los Angeles Times

Sacramento Mayor Darrell Steinberg is working to form a local ownership group that could purchase the Sacramento Bee, separating the 163-year-old publication from its parent company, McClatchy, which filed for bankruptcy last month. The mayor compared the effort to the city’s successful years-long campaign to keep its NBA team, and said he speaking with a group of deep-pocketed investors about a potential purchase. Sacramento Bee

Cowboys will drive a few hundred cattle through the main drag of a small Central Valley town this weekend during the annual Chowchilla Western Stampede Cattle Drive. Madera Tribune

Where to eat and drink at Milpitas Square, a Chinese mall in the heart of Silicon Valley. A 160,000-square-foot outdoor mall with everything from Shaanxi-style noodles to Shanghainese pan-fried buns. Eater SF

“My first trip to California was in 1962. We were taking a six-week travel trailer trip around the U.S. (joys of a self-employed father). My Dad decided to keep the trailer at a park in San Bernardino and drive the car into L.A. proper, rather than fight traffic with the trailer. Every evening, after touring around, we’d drive the San Bernardino Freeway back out to the trailer. We were there in spring, so I would ride out the whole way with my head out the window, like a dog, inhaling as much as I could of the heady scent of orange blossoms in the surrounding orchards — a continuous blanket of heavenly odor all the way out there!”

If you have a memory or story about the Golden State, share it with us. (Please keep your story to 100 words.)

Please let us know what we can do to make this newsletter more useful to you. Send comments, complaints, ideas and unrelated book recommendations to Julia Wick. Follow her on Twitter @Sherlyholmes.