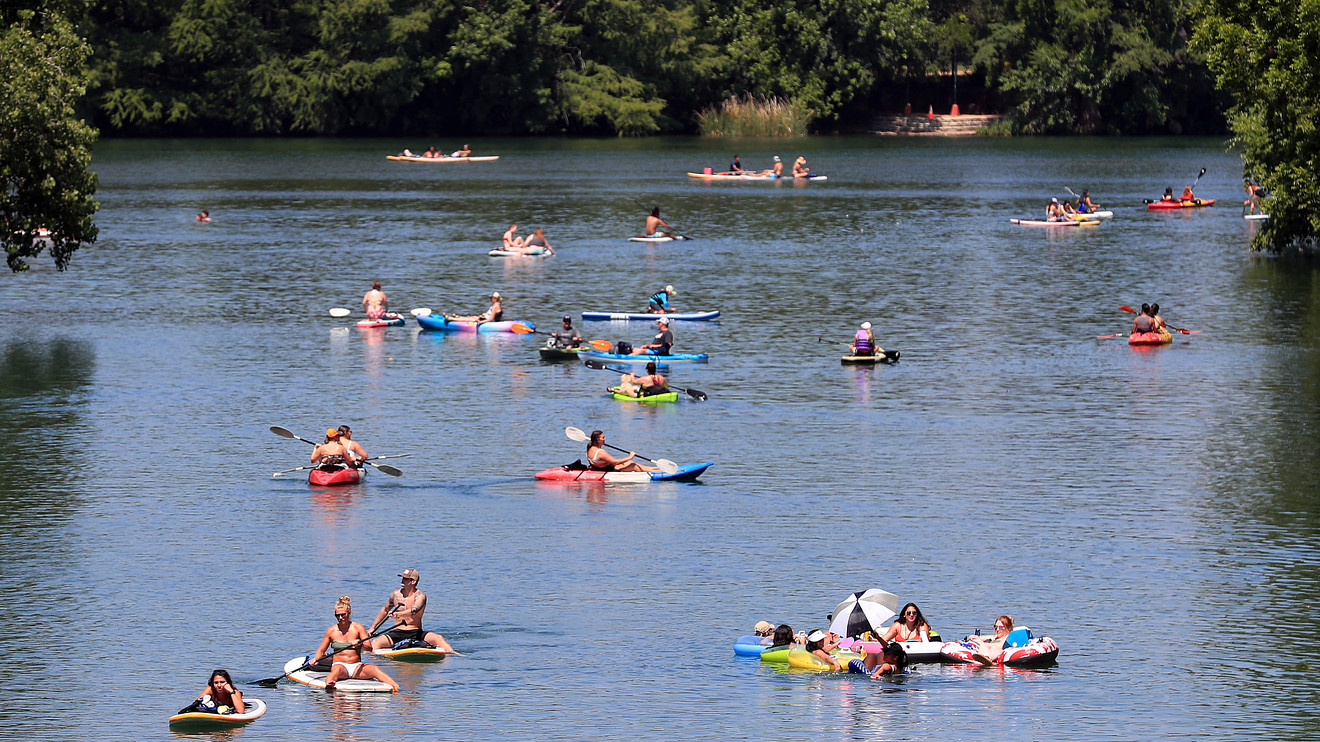 The number of new confirmed cases of the coronavirus illness COVID-19 set another fresh record in the U.S. on Friday, according to data aggregated by Johns Hopkins University, sending state officials scrambling to revisit reopening plans.

Texas, Florida and Arizona had paused their efforts to reopen as hospitals approach full capacity on Thursday and Texan Gov. Greg Abbott reimposed a ban on elective surgeries, to keep space for COVID-19 patients.

On Friday, Abbott went a step further, issuing an executive order that closes all bars, further limits restaurant capacity and restricts certain outdoor activities, including tubing and rafting, that are popular with Texans.

“As I said from the start, if the positivity rate rose above 10%, the State of Texas would take further action to mitigate the spread of COVID-19,” the governor said in a statement. “At this time, it is clear that the rise in cases is largely driven by certain types of activities, including Texans congregating in bars.”

Shortly after the Texas news, Florida banned alcohol consumption at its bars.

The mayor of Miami-Dade County in Florida said he would sign an emergency order on Saturday that will close beaches starting July 3 through July 7.

“The closure may be extended if conditions do not improve and people do not follow New Normal rules requiring masks to be worn always inside commercial establishments and outdoors when social distancing of at least 6 feet is not possible,” Mayor Carlos Gimenez said in a statement.

California Gov. Gavin Newsom said he was reimposing restrictions on Imperial County because of a spike in cases.

The Centers for Disease Control and Prevention (CDC) said this week that an estimated 20 million Americans, about 6% of the population, have likely been infected with COVID-19, according to a nationally representative survey it conducted using blood samples.

This figure, which takes into account asymptomatic people and those who were sickened but did not get tested for COVID-19, is more than eight times larger than the estimated 2.3 million tests that have been performed in the U.S.

The administration of President Donald Trump is considering a new approach to testing, using a pooled strategy that could help find infected patients faster and quickly isolate them, the Washington Post reported.

Dr. Anthony Fauci, head of the National Institute for Allergies and Infectious Diseases, told the paper that health officials are in “intense discussions” on pool testing. The strategy involves testing samples from many people all together. If the tests are negative, the group can be considered to be infection-free. If the test is positive, only then would individual tests be needed, he said.

“What you need to do is find the penetration of infected people in your society,” Fauci told the paper. “And the only way you know that is by casting a broad net.”

Germany, Israel and other countries are using pool testing.

The White House Task Force created to manage the pandemic held its first public briefing in two months on Friday, but took very few questions from reporters. Vice President Mike Pence said the U.S. had succeeded in slowing the spread and flattening the curve, even though the data shows otherwise.

Pence acknowledged that the surge in cases in the South is of concern, but said half of new cases are patients below the age of 35, “which is very encouraging, because younger people are less susceptible to serious outcomes.”

Pence did not wear a mask like the other members of this task force.

Fauci emphasized that the virus poses a special challenge in the high number of carriers that have no symptoms, which makes them unlikely to seek testing and enable health officials to trace and isolate their contacts. He called on young people in particular to understand their individual responsibility as well as their societal one.

In a move that bewildered many, the Trump administration on Thursday urged the Supreme Court to overturn the Affordable Care Act, a move that would strip more than 20 million Americans of health coverage. The administration made the filing with the high court in a continuation of the 10-year battle that Republicans have fought over the act known as “Obamacare” ever since its passage in 2010.

House Speaker Nancy Pelosi slammed the administration for the move, coming in the midst of the worst public-health crisis since the 1918 flu outbreak.

Pelosi is planning a floor vote early next week on her own bill to expand the ACA.

“There is no legal justification and no moral excuse for the Trump administration’s disastrous efforts to take away Americans’ health care,” she said in a statement.

Billionaire philanthropist Bill Gates, whose foundation has long funded global fight against infectious diseases, also criticized the government on Thursday, for failing to manage the crisis. In a virtual town hall on CNN, Gates said the U.S. is “not even close” to doing everything it can to battle the pandemic, and said the global response is worse off because of a lack of leadership

There are now 9.8 million confirmed cases of COVID-19 worldwide and at least 495,079 people have died, the Johns Hopkins data shows. About 4.9 million people have recovered.

The U.K. has 43,498 fatalities, the highest in Europe and third highest in the world.

China, where the illness was first reported late last year, has 84,725 cases and 4,641 fatalities.

The European Union is expected to announce a decision later Saturday on which countries citizens will be allowed to enter the trading bloc starting July 1, and the U.S. is not expected to make the cut, the Wall Street Journal reported.

A final decision is yet to be taken on the list, but diplomats said they were reasonably confident it would be approved unchanged. Member states have been asked to approve it by Saturday evening.

A number of small biotechs were heavily traded Friday on COVID-19-related news.

Vaxart Inc. stock
VXRT,
+28.43%
skyrocketed 77%, on the news that its oral COVID-19 vaccine has been selected to take part in a non-human primate challenge study funded by the U.S. government’s ‘Operation Warp Speed’ program, that aims to accelerate development of a vaccine.

The study is designed to evaluate the efficacy of the candidate. Chief Executive Andrei Floroiu said it’s the only oral candidate in the program.

“SARS-CoV-2, the coronavirus that causes COVID-19, is primarily transmitted by viral particles that enter through the mucosa – nose, mouth or eyes – strongly suggesting that mucosal immunity could serve as the first line of defense,” he said in a statement. “In addition, our vaccine is a room temperature-stable tablet, an enormous logistical advantage in large vaccination campaigns.”

Inovio Pharmaceuticals Inc. shares
INO,
-4.06%
rose nearly 4%, erasing an earlier loss of as much as 21%, after a Stifel analyst downgraded the stock to hold from buy, while raising his stock price target to $24 from $19. Stifel’s Stephan Willey said the risk-versus-reward investment scenario “seems less palatable” at current prices.

Don’t miss: Race for a COVID-19 vaccine has drug makers scaling up manufacturing — before one is developed

What are companies saying?

There was grim news for sporting goods maker Nike Inc.
NKE,
-7.62%
after it swung to a loss for its fiscal fourth quarter and sale sales fell a whopping 38% despite a big surge in online shopping. The Dow Jones Industrial Average component saw its shares slide 6% in early trade.

Nike pinned the 38% drop on store closures due to the coronavirus pandemic and fewer shipments to its wholesalers, which increased inventory.

Analysts polled by FactSet had expected Nike to report a GAAP loss of 8 cents a share on sales of $7.3 billion.

The company vowed to continue to invest more in online sales.

“We are uniquely positioned to grow, and now is the time to build on Nike’s strengths and distinct capabilities,” Chief Executive John Donahoe said in a statement. “We are continuing to invest in our biggest opportunities, including a more connected digital marketplace, to extend our leadership and fuel long-term growth.”

Here are the latest things companies have said about COVID-19:

• Big Lots Inc.
BIG,
+27.14%
has seen a continuation of the strong demand that began in mid-April during the pandemic, putting its same-store sales in the second quarter-to-date “well ahead of expectations.” Columbus, Ohio-based Big Lots is now expecting second-quarter same-store sales to be up in a mid-to-high twenties percentage, which reflects some moderation from current trends. That is far ahead of the 13.3% FactSet consensus. It expects second-quarter adjusted per-share earnings to range from $2.50 to $2.75, excluding a gain of about $11 a share on the sale of four distribution centers in a sale and leaseback transaction. That will be up from 53 cents in the same period a year ago. The FactSet consensus is for EPS of 84 cents. The company has cash of about $890 million and has not tapped its $700 million revolving credit facility. The cash position does not include about $170 million relating to the sale/leaseback deal.

• The Kroger Co.’s
KR,
-0.30%
board approved an increase in its quarterly dividend to 18 cents a share from 16 cents. The new dividend will be payable Sept. 1, to shareholders of record as of close of business Aug. 14. The supermarket chain posted better-than-expected first-quarter earnings last week as consumers stocked up for in-home dining during the pandemic.

• Office Depot Inc.
ODP,
-11.57%
is planning a 1-for-10 reverse stock split effective June 30. The Boca Raton, Florida-based office goods retailer said shareholders approved the move at its May 11 annual meeting. The company will not issue any fractional shares in connection with the move, but shareholders who would have been entitled to them will receive a cash payment in lieu.

• Progress Software Corp.
PRGS,
-0.55%
hiked its outlook for the year even as earnings fell short of Wall Street estimates. “We had solid performances across our segments and products, and our business has proven to be extremely durable, despite the ongoing economic disruption caused by COVID-19,” said Progress Chief Executive Yogesh Gupta in a statement. “Our confidence in our ability to execute is reflected in our increased full-year guidance for revenue and EPS.”

• Spectrum Brands Holdings Inc.
SPB,
-4.07%
launched a $300 million offering of 10-year bonds on Friday, joining the many companies issuing debt during the pandemic. The company, which owns a portfolio of brands including George Forman, Russell Hobbs and Remington, said the proceeds will be used to repay part of a revolving credit facility.

[ad_1] INGLEWOOD, Calif. (KABC) — Coronavirus is challenging all of us in different ways, …