Los Angeles County on Thursday hit another daily record for COVID-19 deaths, underscoring the increasingly dangerous conditions as another holiday arrives and hospitals struggle to deal with an onslaught of patients.

The county reported 148 deaths, a new daily high that comes as officials fear Christmas gatherings will cause infections to spread even more. More than 13,000 new coronavirus cases were also reported.

The worsening numbers come as hospitals to divert ambulances and leave patients in the lurch for hours. It is also prompting officials to warn healthcare providers to not send patients to the emergency room unless absolutely necessary.

County health officials sent a memo to doctors and nurses across the county Wednesday evening reiterating that hospitals were reaching a breaking point.

“Hospitals have implemented their surge plans and are adjusting staffing and space to try to meet the needs of their community,” wrote Dr. Sharon Balter, the county’s chief of communicable disease control and prevention, in the memo. “It is critical that as a healthcare community we look at all available opportunities to help decrease the surge on hospitals and our 911 system, where possible.” 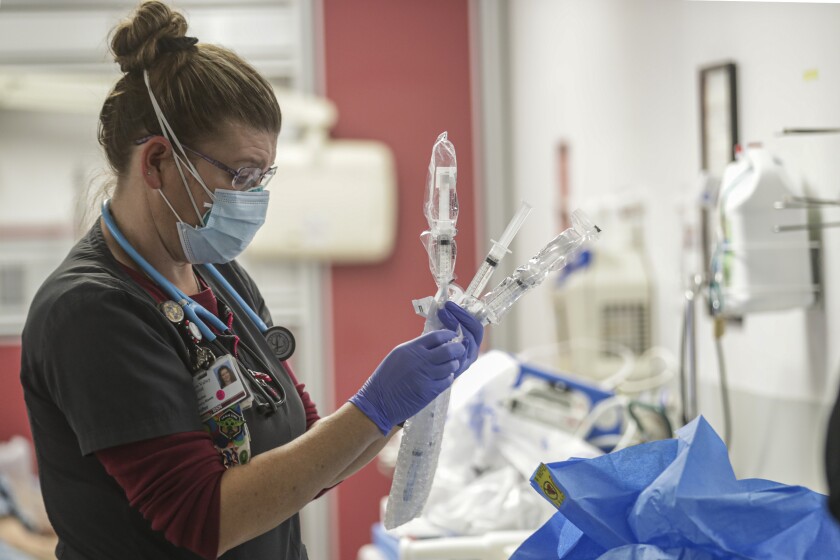 Balter asked providers to talk to patients suffering from ongoing medical problems about when it was appropriate to visit the ER or call 911, and to only do so when it is a true emergency. She also encouraged the quick discharge of hospitalized patients to try to create as much space as possible on wards, citing a “steep increase” in COVID-19 cases and hospitalizations.

In a grim recommendation, Balter also asked providers to reach out to patients who had serious illnesses or were medically frail to review their advanced-care directives and ensure forms detailing their end-of-life care were on file.

The memo drives home what officials have been warning about for weeks: The surge in COVID-19 patients also is affecting other ill people who need medical care.

“There are very limited hospital and ICU beds available and emergency departments are strained to capacity,” Balter wrote.

Dr. Brian Gantwerker, a neurosurgeon in Santa Monica, said he dreaded what the next several weeks would hold for Los Angeles. Already, the community hospital where he works is “swamped by COVID cases,” with physicians fearing they will soon have to ration care due to a shortage of beds and staff.

Each day that the number of COVID-19 patients grows also increases the likelihood that more neurosurgery patients may have to wait for care or find it elsewhere, he said.

This puts doctors in the uncomfortable position of determining who receives the limited resources remaining at the hospital. A large brain tumor would likely be operated on immediately, he said, but surgery for a smaller, less dangerous one might have to be delayed.

“Then it becomes a question of, ‘Where is the breaking point? When do we have to start sending patients out to other places?’ And the nightmare scenario is: ‘What happens if there are no beds available in the county?’” he said. “Everything we’ve worried about and talked about and warned people about since February is coming to fruition — we’re at that point now.”

Tracking the coronavirus in L.A. County 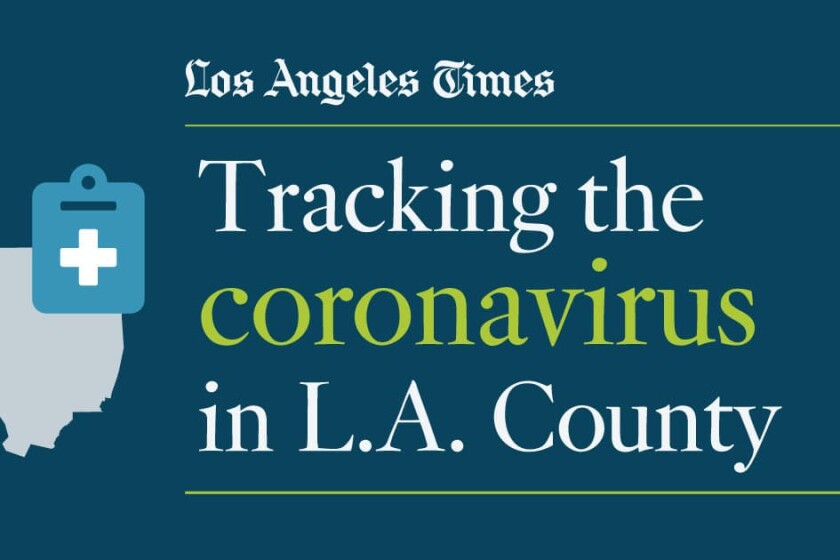 Tracking the coronavirus in L.A. County

The latest maps and charts on the spread of COVID-19 in Los Angeles County, including cases, deaths, closures and restrictions.

The dire and deteriorating conditions in California’s most-populous county come as a giant wave of new coronavirus infections continues to wallop the region, leaving in its wake unprecedented numbers of Angelenos hospitalized or dead.

“We’re in the middle of a horrific surge, and we all need to take the hard steps and the wise steps to reduce transmission and exposures now, during the holidays and as we begin 2021,” said L.A. County Public Health Director Barbara Ferrer. “The sooner we all take these vitally important steps, the sooner we can stop the rise in cases that is overwhelming our hospital care system.”

Right now, she added Wednesday, “it’s time to double or triple all of our efforts to keep each other safe.”

Officials, however, say they fully expect the situation to get worse before it gets better.

Because of the lagging nature of the coronavirus, it typically takes two to three weeks from when someone is infected to when they may fall ill enough to require hospitalization. The patients needing care today, in other words, were largely exposed to the virus weeks ago — when case rates throughout the county and state, though high, were significantly lower than they are now.

Over the last week, L.A. County has reported an average of 13,970 new coronavirus cases per day, a roughly 60% increase from two weeks ago, according to data compiled by The Times.

That average includes 16,974 new infections that were reported Wednesday — the county’s second-highest daily total ever.

Officials are also concerned that the surge in cases and hospitalizations could bring a major spike in deaths. Los Angeles County reported one of its deadliest days yet in the COVID-19 pandemic Wednesday, when 134 people died.

Too many people have seen “loved ones whose symptoms got worse, or loved ones who became hospitalized, loved ones who were moved to the ICU or, even worse, they received the news that their loved ones won’t be coming home — not for these holidays and not ever,” said L.A. Mayor Eric Garcetti.

“We know that this emergency is our darkest day, maybe the darkest day in our city’s history,” he said. “But we must find the fortitude, we must summon the strength to make sure that we save lives.” 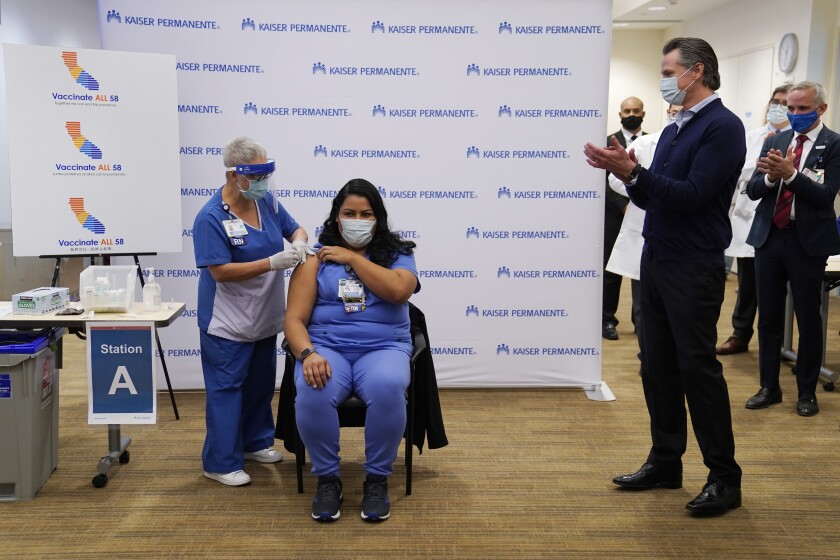 California’s community vaccine advisory committee is still hashing out its next phase for vaccine distribution prioritization.

Dr. Christina Ghaly, the county’s health services director, forecast this week that nearly 7,000 more people might die from COVID-19 by the end of January if trends continued.

“These people did not need to die,” she said Wednesday. “We have never seen daily death rates this high throughout the course of the pandemic, and the model predicts that the worst is yet to come.”

At certain points of the day Tuesday, 96% of all hospitals in L.A. County were so full that they were diverting some ambulances to hospitals farther away, a figure that is usually only 33% at this time of year, according to Ghaly.

Ambulances had to wait hours to offload patients into crowded emergency rooms, and scheduled surgeries are being postponed to make way for those suffering from COVID-19.

About half of all intensive-care beds in L.A. County are filled with COVID-19 patients at this point. Two out of three of them are suffocating due to coronavirus-triggered inflammation of their lungs, Ghaly said.

“They’re suffocating to the point that they can no longer breathe on their own, and they have to have someone put a tube down their throat in order to oxygenate their organs,” Ghaly said. “Many of these people will not live to see 2021.”

There were roughly 6,700 coronavirus-positive patients hospitalized countywide on Wednesday, according to the latest state data, with 1,329 of them in the ICU.

“If we continue to spread this virus, if we see a linear growth of this for the next two weeks, we will not have enough medical staff to treat everyone,” Garcetti said. “And hospitals may soon be in the position of having to ration care. That means that doctors will be forced to determine who lives and who dies, and more Angelenos will lose their lives, not just to COVID-19, but to other medical emergencies.” 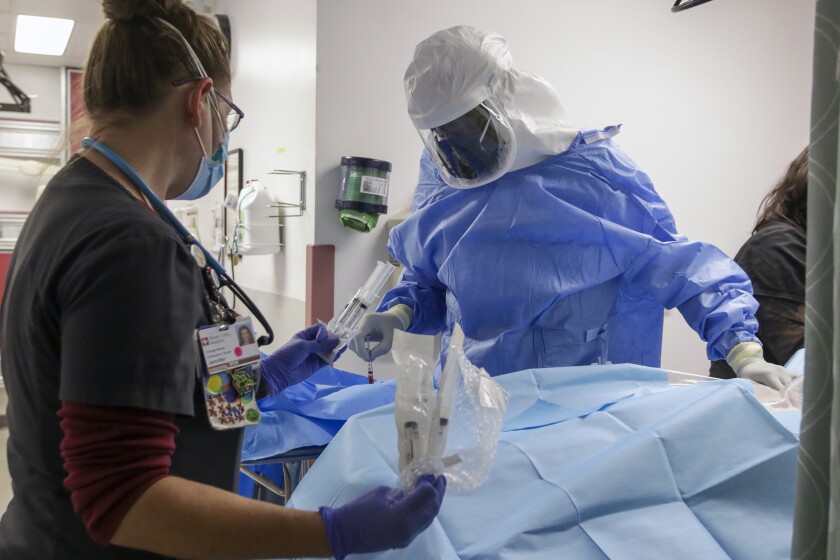 The Inland Empire has become the hotbed of the COVID-19 spread even as officials sue the state to ease restrictions.

It’s amid this harrowing backdrop that officials have issued increasingly forceful calls for residents to avoid traveling and gathering to celebrate the winter holidays.

Too often, similar pleas made ahead of Thanksgiving fell on deaf ears, officials say, and wide rejection of that guidance has wrought the worst and deadliest wave of the pandemic yet.

“Life, as we know, does not let us go back in time and redo or relive our mistakes,” Ghaly said. “All we can do is change our behavior from this point forward.”

Should large numbers of people make the same choices for Christmas and New Year’s, officials and experts alike warn that will likely trigger a “surge on top of a surge” — meaning more people will become infected, fall ill and, eventually, die.

The county Department of Public Health issued a plea Thursday for people of faith to forego gathering indoors to worship any winter holidays, and instead attend remotely streamed or outdoor services.

“Now, most unfortunately, is not the time to attend indoor religious services,” officials said. “The county of Los Angeles is in the midst of its highest surge of COVID-19 cases. The local emergency rooms and hospitals are over capacity. And there are no indications of an end in sight to the current surge.”